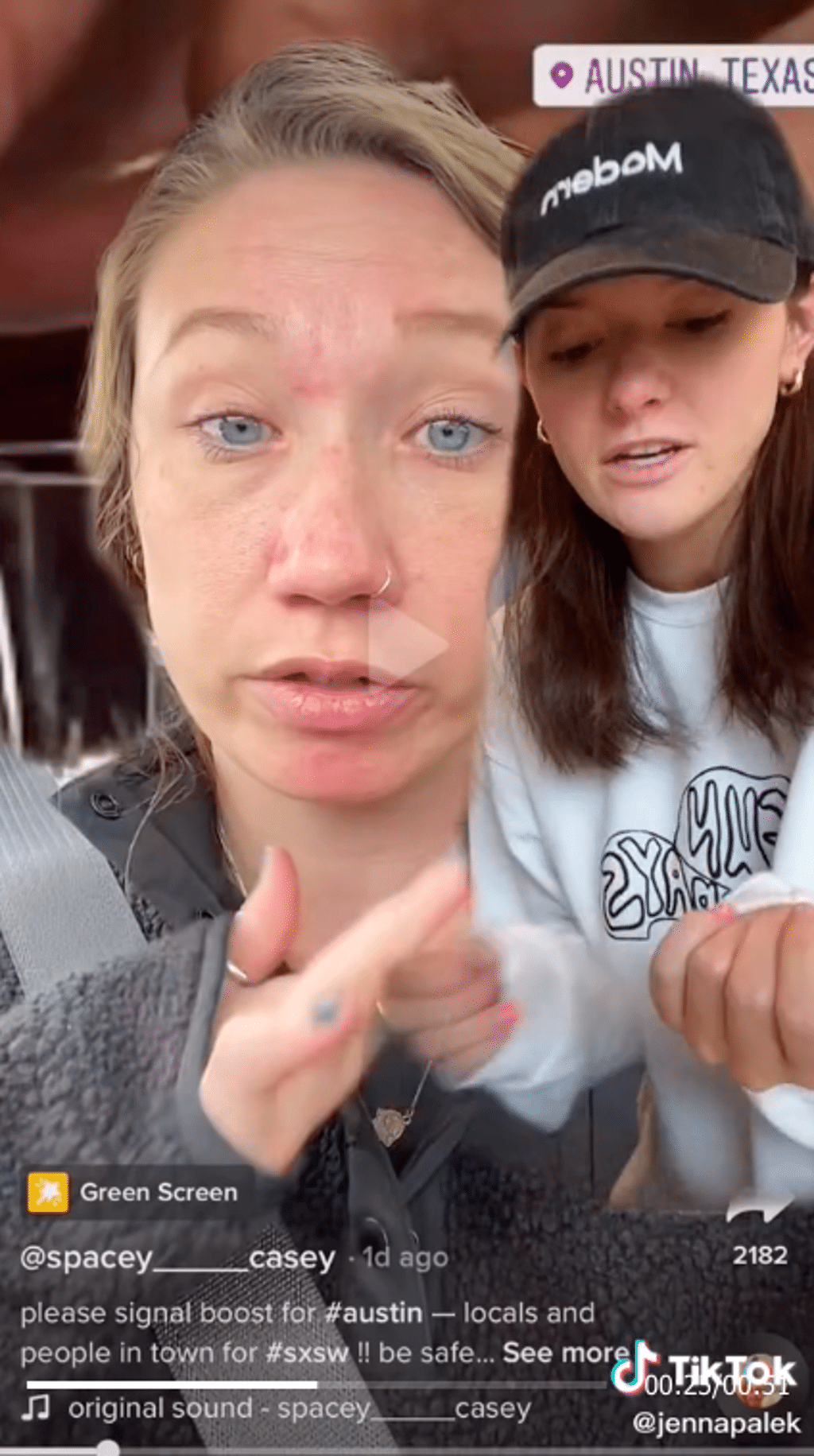 Several TikTokers in the Austin, Texas area have come forward with warnings for young women planning to go out and experience the city’s nightlife, alleging that they could be at risk of a terrifying trend they claim to have experienced either firsthand or through a friend – illegal drink spikes.

Kara Halderman, a TikToker and wellness influencer based in Austin, posted a video on 13 March 2022 where she claims to be “99.99% sure” that she had been drugged the night before while visiting a bar in the area.

“I don’t know what it was, I was completely fine one second and then the next second throwing up, violently ill completely black hole, do not remember anything,” Ms Halderman says in the video. “I’ve never had an experience like this.”

The young woman’s claims of a suspected drink tampering appear to not be the only one in recent weeks, as comments on her original video and her follow-up posts include dozens more unverified reports of drink spiking.

“Please just like to be careful,” Ms Halderman warns at the close of her video.

Less than a week later, the Tiktoker shared a follow-up to her original post, but this time she had partnered, or in TikTok slang, cross-stitched, with a now-viral video created by another Texas woman.

Jenna Palek, a content creator and podcast host, told the Daily Dot that though she had not personally experienced instances of alleged drink tampering, she wanted to use her large platform (82.5k on Instagram and 445.8k on Tiktok) to raise the alarm for other women in the area as she’d heard “numerous” accounts of people being targeted in recent weeks.

Ms Palek claims in the video that, while it hasn’t been verified by authorities in the area, the substance of choice for these alleged attacks is rumored to be fentanyl.

The Austin Police Department responded to The Independent‘s question about whether the department had noticed an uptick in drink spiking incidents in recent weeks and confirmed that they “have not received any new reports”.

In a recent press conference held between the Austin police force and the United States Drug Enforcement Administration, officials warned that individuals going out in the city should always be acting with caution when ordering drinks and food in public spaces.

“I would say there’s always a concern when you’re on Sixth Street or any public place when you’re consuming any type of liquid or any type of food,” said Jerry Bauzon, assistant chief for the police department. “Just be very aware of your surroundings. If you’re at a bar, and you’re ordering a drink, make sure you see the transaction, make sure you see the bartender pour the drink or the waiter deliver the drink.”

If verified, this would not be the first time that the Texas city has experienced a spate of illegal drink tampering in its downtown scene.

Back in 2019, a woman’s post on Facebook about being drugged while out on Rainey Street, a popular haunt in Austin known for offering up live music and late-night bars, led to a police investigation. Doctors in the area interviewed for the story later confirmed that patients would come into hospital at least once a month complaining of symptoms that align with being drugged, CBS reported.

“It’s a trend we have noticed of individuals coming in, seeking care for symptoms that are unusual for just alcohol consumption,” Austin-based doctor Hemali Patel told CBS. “The biggest concern we always have is individuals using this for drug-facilitated sexual assault.”

While there is scant data available around how common these kinds of attacks are, a research team led by Suzanne C Swan, a professor at the University of South Carolina, published a study in 2016 with the American Psychological Association and found that one in 13 students report that they’d personally been drugged while out drinking with friends.

Data for these kinds of incidents however, the team found, is limited given the nature of their subjects.

“We have no way of knowing if the drugging victims were actually drugged or not, and many of the victims were not certain either,” the researchers wrote.

And this phenomenon is, unfortunately, a global one.

Just last fall on the other side of the Atlantic, the UK’s National Police Chiefs’ Council reported nearly 200 incidents of drink tampering over the course of two months. And according to a recent YouGov poll, one in nine women and one in 17 men in the UK report that they’ve personally been the victim of drink spiking, while one in three women and one in five men say they know someone who was a victim.