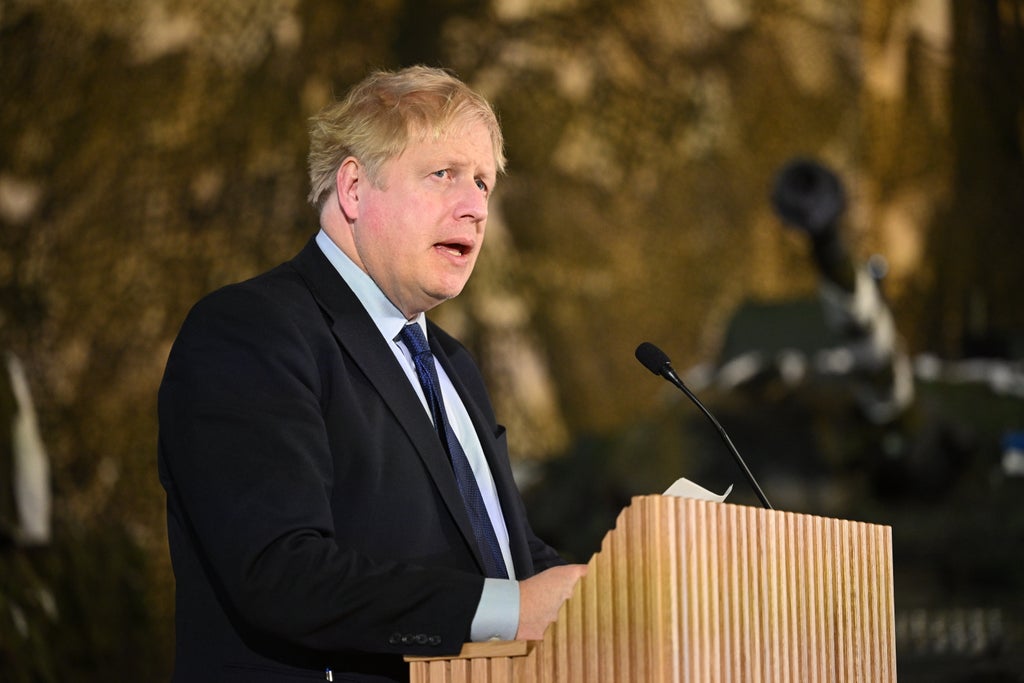 “I cannot think of a time in international affairs when the difference between good and evil, between right and wrong, has been so obvious,” said Boris Johnson, standing behind a lecture in Estonia.

He didn’t look relieved, exactly, but he has good reason to be. This is the way he likes it. No need to write two columns on this one and see which one’s better. It’s all very obvious now.

Which it is. But the trouble is, well, it is possible that it was obvious to other people quite a long time ago, back when it wasn’t so obvious to Boris Johnson.

Say, you know, 2016, when he was blaming the EU for Putin’s invasion of Crimea. “If you want an example of EU foreign policy making on the hoof, and the EU’s pretensions to running a defense policy that have caused real trouble, then look at what has happened in Ukraine,” he said at the time, in remarks that caused Jack Straw to describe him, entirely accurately, as a Putin apologist.

But things were different back then. That was before things got as “obvious” as they have now. Back then it was fine to blame the EU for Putin’s aggression against a sovereign state because you had a referendum to win and it really didn’t matter what arrant garbage you had to come out with to win it.

And he did win it. Which was why, at noon today, when Ukraine’s President Volodymyr Zelensky addressed the EU parliament in Brussels, there was no one from the UK there to applaud at the end. Our last contribution in that room was two years ago, when Ann Widdecombe ululated and consistent Putin apologist Nigel Farage swayed, and they stormed out, comparing themselves to the young men who stormed the beaches at Normandy. But, well, all this wasn’t so “obvious” back then.

Johnson is worried about the same thing everyone else is worried about – that intervention risks escalation to nuclear war. Fiona Hill, the leading Kremlin analyst and former US security adviser, who sat in meetings between Trump and Putin, hasn’t pulled her punches on this subject.

“The thing about Putin is, if he has an instrument, he wants to use it. Why have it if you can’t?” she said in an interview with Politico that does not make for easy reading.

She carries on: “He’s already used a nuclear weapon in some respects. Russian operatives poisoned Alexander Litvinenko with radioactive polonium and turned him into a human dirty bomb and polonium was spread all around London at every spot that poor man visited. He died a horrible death as a result.

“The Russians have already used a weapons-grade nerve agent, Novichok. They’ve used it possibly several times, but for certain twice. Once in Salisbury, England, where it was rubbed all over the doorknob of Sergei Skripal and his daughter Yulia, who actually did n’t die; but the nerve agent contaminated the city of Salisbury, and anybody else who came into contact with it got sickened.

“Novichok killed a British citizen, Dawn Sturgess, because the assassins stored it in a perfume bottle which was discarded into a charity donation box where it was found by Sturgess and her partner. There was enough nerve agent in that bottle to kill several thousand people. The second time was in Alexander Navalny’s underpants.”

So, in some regards, the difference between good and evil has been at least slightly obvious for a while now. And it probably isn’t lost on Putin that the guy standing there saying, “Putin must fail! Putin must fail!” happened to be the foreign secretary, back when he murdered that British citizen with a deadly nerve agent.

And he possibly also hasn’t forgotten that Johnson didn’t actually bother to attend the emergency Cobra meeting on the subject because he was busy in his office with his own private photographer, doing a photoshoot of himself signing his own resignation letter over Theresa May’s Brexit deal. (A deal which, it is always worth pointing out, I have voted for a few weeks later.)

None of this to say that Johnson is wrong. The difference between good and evil is incredibly obvious at the current moment. So obvious that it makes the lives of columnist prime ministers very easy indeed. Still, it’s something of a shame that the good side didn’t get their act together a bit faster. Because all it can do now is hope that evil has overreached itself, after a very, very long time indeed of not quite being able to believe its luck.

See also  Doctors Without Borders: A film for the white man who goes to Africa with a camera | Future Planet