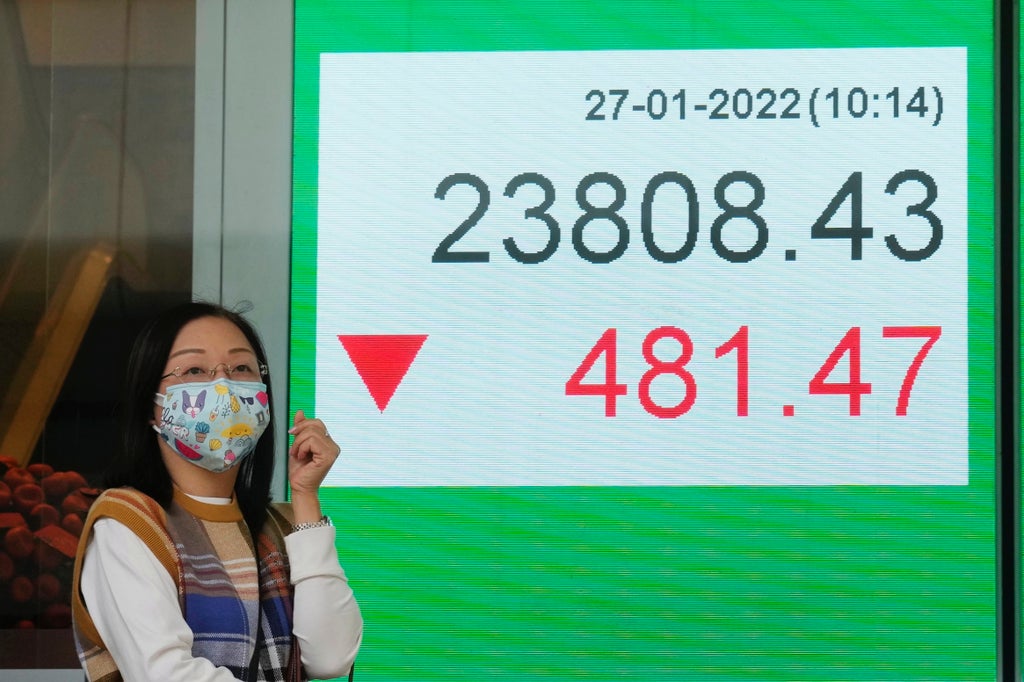 Wall Street’s benchmark S&P 500 index lost 0.1% on Wednesday after a Fed statement said the US central bank “expects it will soon be appropriate” to raise rates. Investors expect as many as four rate hikes this year, starting in March. The Fed said monthly bond purchases that push down long-term rates by injecting money into the financial system would be phased out in March.

“The Fed’s decision will reverberate globally, meaning that the era of low interest rate, ultra-low interest rate is over,” said Francis Lun, CEO of Geo Securities in Hong Kong. “All the central banks will start to fight inflation instead of trying to stimulate the economy.”

The Kospi in Seoul sank 2.9% to 2,630.78, despite a stunning market debut for battery maker LG Energy Solutions, whose shares started trading at nearly twice their offer price after an initial public offering that drew the equivalent of $13 trillion in bids.

LG Energy Solutions’ shares initially fell but then recovered, gaining 3.3%. The company drew massive interest due to expectations of huge growth in the market for electric vehicles. Its market capitalization of 105.3 trillion won ($87.62 billion) ranks it second in South Korea only to Samsung Electronics Co.

See also  Michael Page vs. Logan Storley: 'Lots of people put on a mask after losing – that will burn away at you'

Samsung’s shares fell 2.1% Thursday after it reported its operating profit for the last quarter rose by more than 53% from the same period last year as it thrived during the pandemic while relying on its dual strength in parts and finished products.

Wall Street rose immediately after the Fed statement but major indexes gave up their gains as Chair Jerome Powell took questions about how and when the central bank will let its balance sheet shrink after buying trillions of dollars of bonds through the pandemic. That would put upward pressure on market interest rates.

The selling accelerated as Powell acknowledged high inflation that has squeezed businesses and consumers isn’t getting better. That could force the Fed to get even more aggressive about raising rates and removing its support for markets.

The last time the Fed raised rates and shrank its balance sheet at the same time was in late 2018. The S&P 500 lost nearly 20%.

“Since the December meeting, I’d say the inflation situation is about the same but probably slightly worse,” Powell said. “It hasn’t gotten better. It’s probably gotten just a bit worse, and that’s been the pattern.”

Powell also said that there’s room to raise interest rates without hurting the labor market, and wouldn’t rule out the possibility that the Fed could raise short-term rates at any of its seven remaining meetings this year or opt for a larger-than- usual increase at any one of them.

The Fed’s near-zero interest rates helped to boost stock prices for nearly two years, but markets have been volatile since Powell and other officials in mid-December said plans to wind down economic stimulus might be accelerated to fight surging inflation.