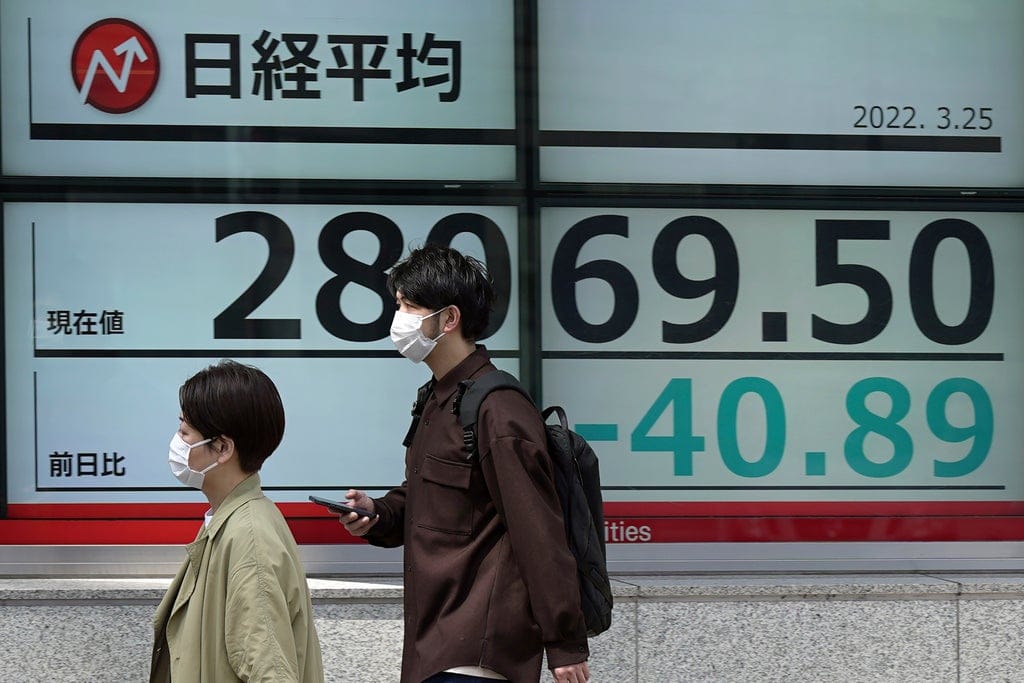 Asian stock markets were mixed Friday after Western governments promised new sanctions on Russia and President Vladimir Putin tried to prop up Moscow’s sinking ruble by threatening to require Europe to use it to pay for gas exports.

Shanghai and Hong Kong declined while Tokyo gained. Oil was little-changed but stayed above $110 per barrel.

Wall Street’s benchmark S&P 500 index rose 1.4% after the number of Americans applying for unemployment fell to a 52-year low.

Western leaders meeting Thursday in Brussels promised more sanctions. President Joe Biden said they were meant to “increase the pain” on Putin. But the leaders released no details of possible new penalties.

Putin threatened to require European customers that rely on Russia gas supplies to pay in rubles. That would increase demand for the Russian currency, pushing up an exchange rate that has slumped under sanctions.

European leaders on Thursday rejected that possibility, potentially setting up a clash over energy supplies.

Putin’s demand is a “cunning gambit” to frustrate sanctions while “elevating uncertainty for the West,” said Tan Boon Heng of Mizuho Bank in a report.

See also  Moon Knight: Who is the Egyptian God Khonshu, and who is Ammit in Moon Knight?

Big Tech companies have outsized values ​​that tend to sway the broader market in either direction. Chipmaker Nvidia vaulted 9.8% for the biggest gain in the S&P 500. Facebook parent Meta rose 2.9%.

Russia’s Feb. 24 invasion of Ukraine sparked investor unease about the impact on prices of oil, gas, wheat and other commodities. Russia is the second-biggest oil exporter and both Moscow and Ukraine are major wheat suppliers.

Markets already were on edge about plans by the Federal Reserve and other central banks to fight surging inflation by rolling back ultra-low interest rates and other stimulus that is pushing up stock prices.

Oil prices are up more than 50% in 2022 due to worries about inflation and possible supply disruptions.