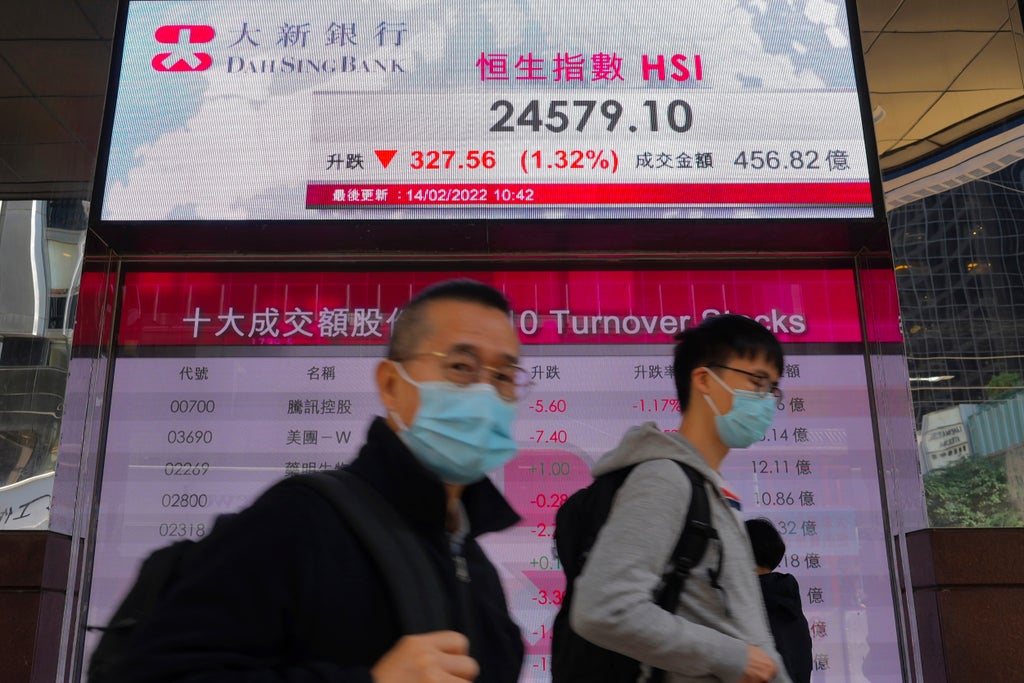 On Wall Street the benchmark S&P 500 index tumbled 1.9% on Friday after the White House encouraged Americans to leave Ukraine within 48 hours. Other governments including Russia were pulling diplomats and their citizens out of the country.

Russia is one of the biggest oil producers. Any military action that disrupts supplies could send shockwaves through energy markets and global industry.

“Markets are belatedly waking up to the geopolitical risks posed by Russian military action against Ukraine,” Rabobank said in a report.

The Bank of Japan made an offer for unlimited government bond purchases on Monday, moving to curb a surge in long-term interest rates. Japan’s central bank sets the interest rate for purchasing 10-year government bonds at 0.25%. The offer drew no bids but still had the effect of lowering interest rates and likely reassured investors of continued support for the markets.

The rate had risen on speculation the BOJ might begin reeling back its ultra-loose monetary policy in line with other central banks like the Federal Reserve. The latest decision highlights the BOJ’s intention to keep interest rates super low since inflation remains well below its target rate of 2%. Japan’s benchmark interest rate has been kept at minus 0.1% for years.

India’s Sensex opened down 1.7% at 57,153.59. New Zealand, Bangkok and Jakarta declined while Singapore was unchanged.

Investors were already on edge about Federal Reserve plans to wind down economic stimulus to cool inflation that is at a four-decade high and about how quickly Europe and other central banks would follow.

On Friday, the S&P 500 declined to 4,418.64 for its fourth weekly loss in the past six weeks after President Joe Biden’s national security adviser, Jake Sullivan, said the threat of a Russian attack is “immediately enough” that Americans should leave Ukraine.

The market price of a 10-year Treasury rose, pushing down its yield, or the difference between the day’s price and the payout if held to maturity, to 1.91% from Thursday’s 2.03%.

Treasury prices had been falling on expectations the Fed will raise interest rates as many as seven times this year. If the Fed succeeds in cooling inflation, that would increase the buying power of the payout from bonds, making them a more attractive investment.