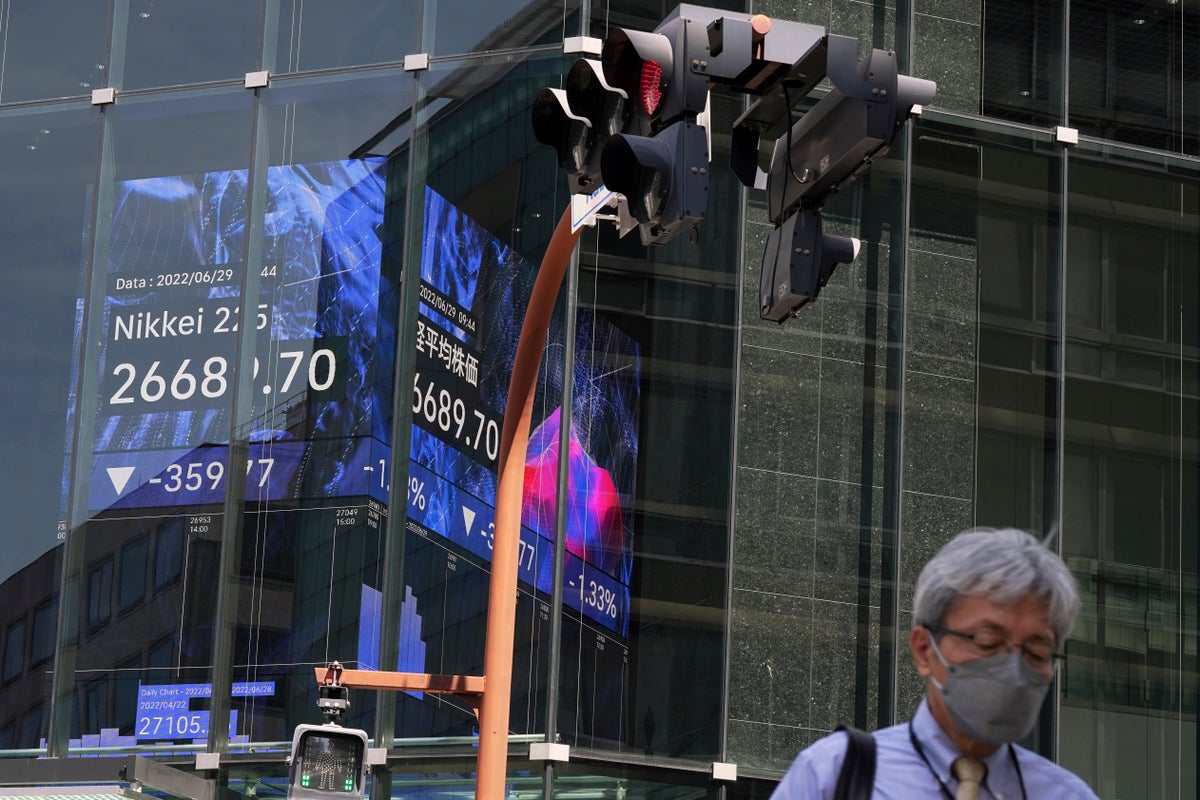 Shares skidded in Asia on Wednesday after another broad decline on Wall Street as markets remain gripped by uncertainty over inflation, rising interest rates and the potential for a recession.

US futures edged higher while oil prices fell back.

That “dragged equities lower as sentiment soured for risky assets,” Anderson Alves of ActivTrades, said in a commentary.

Investors are awaiting comments later in the day by Federal Reserve Chair Jerome Powell and other top central bankers, he said.

Roughly 85% of the stocks in the benchmark S&P 500 closed in the red. Technology, communications and health care stocks accounted for a large share of the decline. Retailers and other companies that rely on direct consumer spending also helped pull the index lower. Energy stocks, the only sector in the index to notch gains this year, rose as crude oil prices headed higher.

The Conference Board reported that its consumer confidence index fell in June to its lowest level in more than a year, results that were much weaker than economists expected.

Investors face a pervasive list of concerns centering around rising inflation squeezing businesses and consumers. Supply chain problems that have been at the root of rising inflation were made worse over the last several months by increased restrictions in China related to COVID-19.

Businesses have been raising prices on everything from food to clothing. Russia’s invasion of Ukraine in February put even more pressure on consumers by raising energy prices and pumping gasoline prices to record highs.

Consumers were already shifting spending from goods to services as the economy recovered from the pandemic’s impact, but the intensified pressure from inflation has prompted a sharper shift away from discretionary items like electronics to necessities.

Central banks are raising rates to try and temper inflation after years of holding rates down to help economic growth but investors fear they could go too far and actually push economies into a recession.

Investors are awaiting remarks expected for midweek by central bank leaders including Fed Chair Jerome Powell and European Central Bank chief Christine Lagarde. They will also get another update on US economic growth on Wednesday when the Commerce Department releases a report on first-quarter gross domestic product.

Wall Street is also preparing for the latest round of corporate earnings in the next few weeks, which will help paint a clearer picture of how companies are dealing with the squeeze from rising costs and consumers curtailing some spending.

“All regions, countries, industries, and stocks are getting printed red with broad strokes. It is not looking pretty, and trading the bad news is good news theory could end in tears,” Stephen Innes of SPI Asset Management said in a report.

In other trading Wednesday:

US benchmark crude oil slipped 69 cents to $111.07 per barrel in electronic trading on the New York Mercantile Exchange.