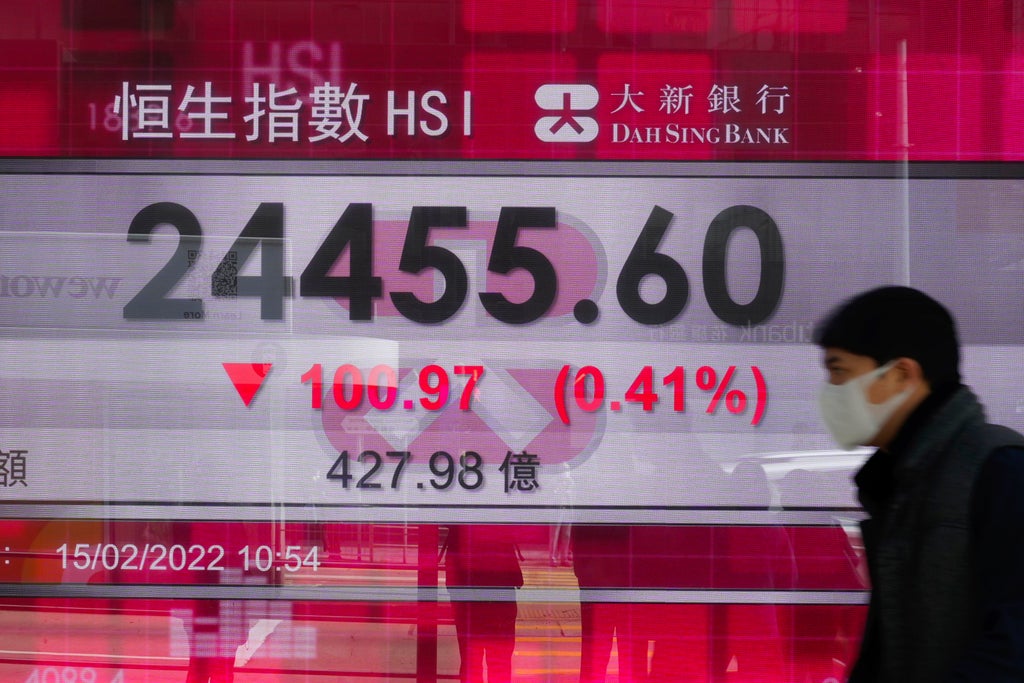 Asian shares were mostly lower Tuesday, echoing a decline on Wall Street, amid concerns about a potential Russian military invasion of Ukraine.

Japanese shares started with a boost from bargain-hunting after recent losses, but the buying quickly ran out of steam. Data released Tuesday showed the economy grew at an annual rate of 5.4% in October-December, when pandemic restrictions were relaxed for a time after infections fell sharply before rebounding with micron outbreaks.

On Wall Street, the S&P 500 fell 0.4% to 4,401.67 after falling as much as 1.2% shortly after the US said it was closing its embassy in Ukraine and moving all remaining staffers there to a city near the Polish border. Russia signaled Monday it could continue talking about the security grievances that have led to the crisis and offered some hope that war could be averted, even as Western allies have warned that Russian troops could move on Ukraine as soon as Wednesday.

Wall Street is also trying to gauge how stocks and the broader economy will be affected from another source of uncertainty: How far and how quickly the Federal Reserve will move to raise interest rates to quash surging inflation.

The central bank is expected to start raising its benchmark interest rate in March and Wall Street expects as many as seven rate hikes this year after last week’s report that inflation jumped 7.5% in January from a year ago, the fastest increase in four decades. Prices also rose 0.6% from December to January, the same as the previous month, suggesting that price gains still aren’t slowing, as many economists and Fed officials have hoped.

The Fed typically responds to high inflation by making borrowing more expensive, which slows spending and the pace of price increases.

“The market is really paying attention to geopolitical stuff right now, whether it’s stuff out of Ukraine or in DC with respect to what the Fed is going to do,” said Willie Delwiche, investment strategist at All Star Charts. “The bigger story is inflation and rates. The Fed is catching up to inflation, the bond market is now taking the Fed seriously and the question is ‘what do US stocks do in that environment?’

Investors also have their eye on the latest round of corporate earnings, in part to get a better understanding of how companies are dealing with high inflation. Some of the most notable companies reporting earnings this week include Airbnb on Tuesday, DoorDash on Wednesday and Walmart on Thursday.

In energy trading, benchmark US crude lost 51 cents to $94.95 a barrel in electronic trading on the New York Mercantile Exchange. It climbed 2.5%, while natural gas prices jumped 6.4% on Monday. Russia is a major energy producer and military action that disrupts supplies could jolt markets and global industries. Brent crude, the international pricing standard, fell 41 cents to $96.07 a barrel.