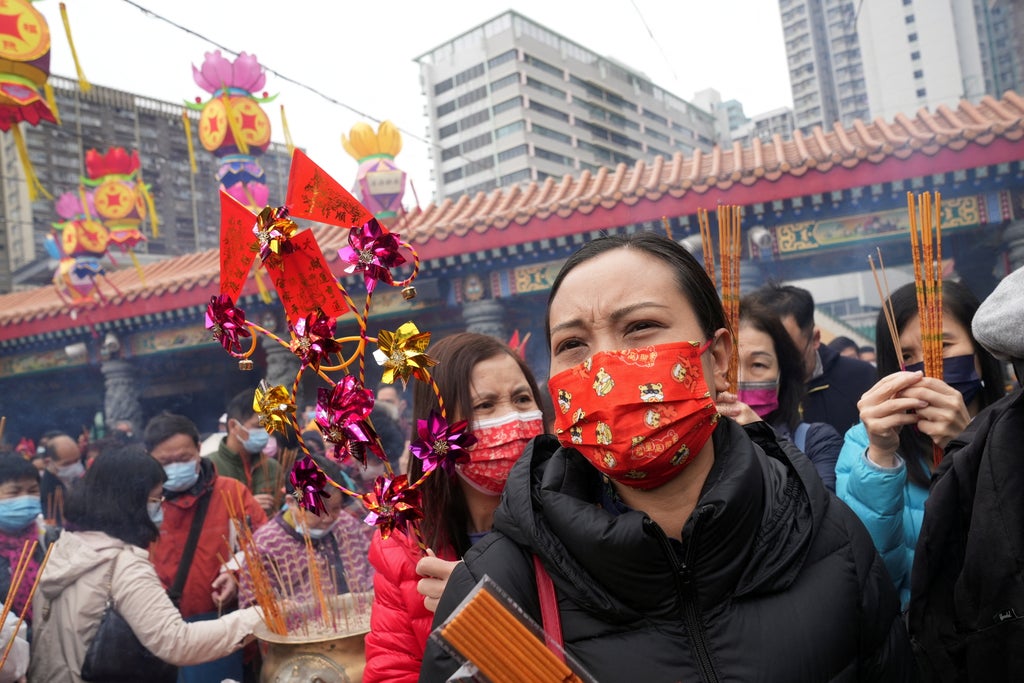 Many Asian countries are facing a spike in Covid infections after the widely-celebrated Lunar New Year holidays, as health officials grapple with the Omicron variant and expectations that numbers will continue to rise in coming weeks.

The Lunar New Year, which is China’s biggest holiday, was celebrated across Asia on 1 February even as pandemic restrictions in many countries kept crowds and family outings to a minimum.

Hong Kong’s authorities are confronting record cases that are straining its so-called “zero-Covid” policy. On Monday, the city reported a new high of 614 local infections.

“We expect there will be more cases coming in a few days. We consider this as some effects after the holiday events and clusters,” said Edwin Tsui, an official at the Center for Health Protection.

Hong Kong currently requires all Covid cases to be hospitalized. On Monday, authorities announced that close contacts of infected persons will be allowed to isolate at home, starting from Tuesday. Those who test positive while in home isolation will be transferred to a hospital.

In Singapore, a dramatic rise in coronavirus infections followed last week’s holiday, with cases tripling to 13,000 on Friday.

Daily infections have since dipped to 7,752 on Sunday, amid restrictions that include limited capacity for restaurants and capping the number of unique visitors to each household.

Singapore has reported more than 100,000 cases spanning the last month, although over 99 per cent of the cases are mild or asymptomatic.

Across Asia, authorities are confronting a similar pattern as the more easily transmissible Omicron becomes dominant, even as health officials in several countries report that Omicron surges are not driving hospitalizations or deaths as high as the previous Delta variant.

In Japan, nearly 90,000 new cases nationwide were reported on Sunday, including 17,526 in Tokyo, as local Omicron infections showed no signs of slowing down. Experts say the infections are now spreading to vulnerable elderly people who are beginning to fill more hospital beds.

Less than 5 per cent of the country’s population has received their third dose of the coronavirus vaccine.

Local outbreak numbers are similarly rising in Indonesia, edging toward the caseloads that marked the height of last year’s devastating delta outbreak.

On 6 January, Indonesia recorded 533 new Covid cases and seven deaths. A month later on Sunday, the daily figure had soared to 36,057. Daily deaths have also climbed to 57, almost four times the rate a week ago.

In Thailand, officials on Monday reported more than 10,000 daily cases for the third day in a row, but the Department of Disease Control said that the number of severely ill patients was dropping, while the fatality rate has remained stable.

Department chief Opas Karnkawinpong said that Thailand might consider relaxing some of the country’s pandemic restrictions, as the Omicron variant seemed to be less severe.

“The global situation of Covid-19 seems to be moving in the same direction,” he was quoted as saying in The Bangkok Post. “Many countries have started to ease measures despite spikes in daily infections.”

In other countries where the Lunar New Year is a major holiday, governments are likewise on high alert ahead of expectations that omicron will continue to stoke higher infections.

New cases in Malaysia have been hovering higher, with the health ministry reporting 11,034 on Monday. The rise came after the Lunar New Year when many Malaysians travel, but health officials said most of the cases were asymptomatic or have light symptoms.

Top health official Noor Hisham Abdullah has warned that daily cases could double by the end of March and urged Malaysians to take their booster dose. Some 98 per cent of adults in the country have completed their vaccination and half of them have received their third jab.

In South Korea, health experts warn that the country may see daily jumps of 130,000 or 170,000 by late February. The country reported 38,691 new cases of the virus, a nine-fold increase from the levels seen in mid-January, when Omicron became the country’s dominant strain.

In Vietnam, authorities have warned that infections may rise after the popular new year holiday.

Vietnam reported 192 cases of the omicron variant in the past month, with most of those showing only mild symptoms or no symptoms at all. With low hospitalization and death rates, Vietnam had previously moved toward resuming most social activities.

The Philippines has moved to ease coronavirus restrictions and open its doors to tourists as outbreak numbers eased to about 8,300 on Sunday, down from a peak of 39,000 in mid-January.

But social distancing restrictions remain in place amid fears of an outbreak ahead of the country’s presidential and general elections on 9 May. Campaigning begins on Tuesday, with a ban in place on handshakes, kissing, hugging and large crowds.

In mainland China, new local infections continue to fluctuate, falling as low as nine on Friday, but rising again to 45 on Monday, most of them in the southern region of Guangxi.

Recent cases have included a handful of omicron infections, though such outbreaks have been tightly contained. Chinese authorities have imposed strict local lockdowns and mass testing, as the country kicked off the Beijing Winter Olympics last week.