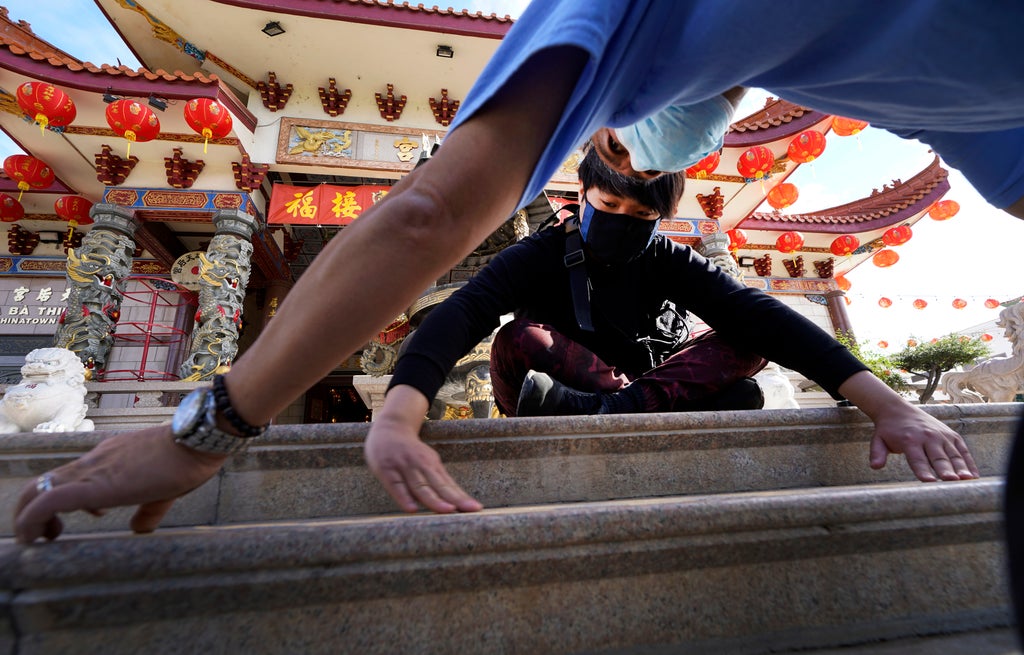 For two years now, Asian Americans and Pacific Islanders across the country have faced verbal, physical and sometimes deadly racist attacks fueled by the coronavirus pandemic.

With the Lunar New Year beginning, many look forward to carrying on family traditions and joining in on community celebrations throughout February. These include family dinners and giving children red envelopes filled with money. New York, Chicago and San Francisco are among the cities with parades planned later this month in their respective Chinatowns.

The year of the tiger, a Chinese zodiac symbol that represents strength and courage, is also the perfect time to convince elderly Asians who have lived in fear due to widespread anti-Asian sentiment to join in the festivities.

“We really just want to share our culture and basically be able to celebrate this joyous event with everyone,” said William Gee, longtime organizer of San Francisco’s annual Chinese New Year Parade and Festival. “Just presence alone in numbers could actually deter any malicious or nefarious activity that might be planned.”

While most of the Lunar New Year revelry was shelved last year due to COVID-19, many outdoor events are making a comeback, with organizers encouraging the use of masks for the public but requiring it for staff. . The various parades will feature floats, marching bands, lion dances and even “Star Wars” cosplayers in San Francisco.

“I hope that anyone who is really scared to go outside because of everything that’s been going on can find safety and some comfort, in terms of going to an event where they’ll be surrounded by like-minded people,” Gee said.

See also  New momentum for the 8,000-kilometer Great Green Wall in the Sahel | Climate and Environment

Several cities that are organizing parades and festivals recently held rallies to mark the first anniversary of the deadly attack in Vicha Ratanapakdee. The 84-year-old Thai American was assaulted while walking in his San Francisco neighborhood.

His death was one of the first reported in what has been a string of fatal incidents against Asian Americans and Pacific Islanders. The somber anniversary came just a couple of weeks after Michelle Alyssa Go’s death in New York City’s Times Square. The 40-year-old woman died after a mentally unstable man pushed her in front of a subway train.

Amanda Nguyen, an activist whose January 2021 Instagram video highlighting attacks on elderly Asians drew a lot of attention, said the ongoing hostility is one more reason to openly celebrate Asian cultures. Having fun with family and friends is not dismissing tragedy but “the most radical form of rebellion.”

“I know it’s a difficult time, but Lunar New Year is a joyous celebration that is deeply rooted in the community,” Nguyen said. “I want people to know that you can grieve. You can grieve, collectively heal, and also make room to be yourself, to have joy.”

Russell Jeung, co-founder of Stop AAPI Hate, which has been tracking incidents across the country based on victims’ own reports, said nervous Chinatown elders are trapped in “de facto segregation.” For two years they have been limited to certain streets or neighborhoods.

“So to honor our elders, we really need to help address that sense of isolation, making them feel included, safe and secure again,” Jeung said. “You do that… by taking them out, chaperoning them, taking them shopping, treating them to meals, and then working to make the community safer.”

Earlier this month, the San Francisco Police Department reported that anti-Asian hate crimes in 2021 were up 567% from 2020. Preliminary data compiled by the Center for the Study of Hate and Extremism indicates that Los Angeles The US and New York also saw record levels of attacks against Asians. Asian hate incidents. Georgia saw the most deaths after the March 2021 Atlanta-area spa business shootings that left six Asian women dead.

Initial figures from individual law enforcement agencies indicate that anti-Asian hate crimes rose 339% overall in 2021, compared to a 124% increase in 2020, according to the Center for the Study of Hate and Extremism. Many people attribute the tendency of former President Donald Trump to talk about the coronavirus, which first appeared in China, in racial terms.

“The data is so horrible that seeing it confirmed in other sources is not surprising and validates what we know,” Jeung said.

Nguyen believes that incorporating more Asian American and Pacific Islander history into K-12 education can help change the climate in the future. She has been organizing petitions in various states.

“That’s when people are learning about everything. I think a lot of the hate, the xenophobia, that professional foreigner stereotype, even ‘yellow fever,’ the way AAPIs are characterized, that stems from ignorance,” Nguyen said, using the acronym for Asian-Americans. and Pacific Islanders. “Let’s celebrate people who have broken barriers.”

Bing Tang, of Monterey Park, California, says he doesn’t dwell on Asian hatred too much because it won’t do anything. Tang, who was shopping in Los Angeles’s Chinatown last week for tiger decorations for a family dinner of steamed chicken, fish and lobster, said thankfully neither he nor anyone close to him has been harassed or attacked.

“There are good people, bad people all over the country,” Tang said. “I just go out normally and have a positive attitude. What can we do? We can only control ourselves and be nice to other people.”

Tang reported from Phoenix and is a member of The Associated Press’s Race and Ethnicity team. Follow her on Twitter at https://twitter.com/ttangAP