Asda has managed to retain its crown as the UK’s cheapest supermarket for online shopping, taking their long-lasting reign to just over a year.

The big six grocer was named the best value online supermarket for a 13th month in a row, beating out Tesco, Morrisons and Sainsbury’s for the title.

New research conducted by Alertr has found that the supermarket chain is almost a whopping £20 cheaper than premium priced supermarkets for the exact same items.

The online price tracking website has been monitoring the prices of six UK supermarkets as part of their monthly analysis to find the cheapest place for your weekly shop. Lidl and Aldi were not included as they do not currently offer a full shopping range online.

Based on an online basket of 42 everyday items, Asda was found to still be offering shoppers the lowest costs with a total of just £111.94. It made them £19.37 cheaper than Ocado who is this month’s most expensive supermarket.

The basket included items such as eggs, milk and bread, as well as non-perishables such as pasta, rice and cereal.

Tesco’s managed to ward of strong competition from Sainsbury’s, as they managed to return to the runner-up position with a total of £118.58.

Despite costs lowering towards the end of the month, Sainsbury’s slid to third place at £3.13 more than Tesco with a basket total of £121.71.

They were followed closely by Morrisons who came in fourth with a total that would cost shoppers £125.08.

On the other end of the scale, Waitrose managed to end its own long-running reign as the UK’s most expensive online supermarket, as Ocado pips them to the post with a total of £131.31.

Waitrose slid to second runner-up with a basket total that was 12p cheaper than last month, coming to £130.49.

The experts at the price tracking website did find that the price of vegetables, such as potatoes, carrots and broccoli, fluctuated throughout the month across all six supermarkets – mainly due to the Easter holidays.

Carrots at Morrisons and Asda started the month at 19p and 20p and then, for the second week of April, more than doubled to 39p and 43p respectively. Sainsbury’s and Ocado also both increased the price of their carrots by 5p for the week of Easter celebrations.

As for potatoes, the price at Tesco and Sainsbury’s went up by 3p from £1.15 during the first week of April to £1.18 for the following week at both supermarkets, while the price of broccoli surged from 20p to 50p at Asda within the same time frame.

Surprisingly though, the price of chocolate remained the same for all supermarkets throughout the month, despite Lent coming to an end and the Easter holidays taking place, with Asda and Tesco offering the cheapest chocolate at £3 for a 360g Cadbury’s Chocolate Bar.

Andy Barr, co-founder of Alertr said: “For the weekly shop, as it currently stands, there’s still a stark difference between the top and bottom spots on the leader board of almost £20 this time around.

Typically, since the start of 2022, we’ve seen much less disparity across the rest of the board, especially between those supermarkets placing second, third and fourth – Tesco, Sainsbury’s and Morrisons.

However, Asda seems to have now broken away from the rest of the pack, with a considerable price difference of £6.64 between them and runners-up, Tesco.

Who knows how the battle of the supermarkets will play out over the next few months – whether the gap closes between competitors or if the leader board starts to stabilize a little. With the cost of living squeezing household incomes, it’ll be interesting to see how all the top supermarkets cope over the coming months.”

Don’t miss the latest news from around Scotland and beyond. Sign up to our daily newsletter here. 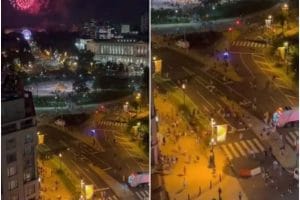