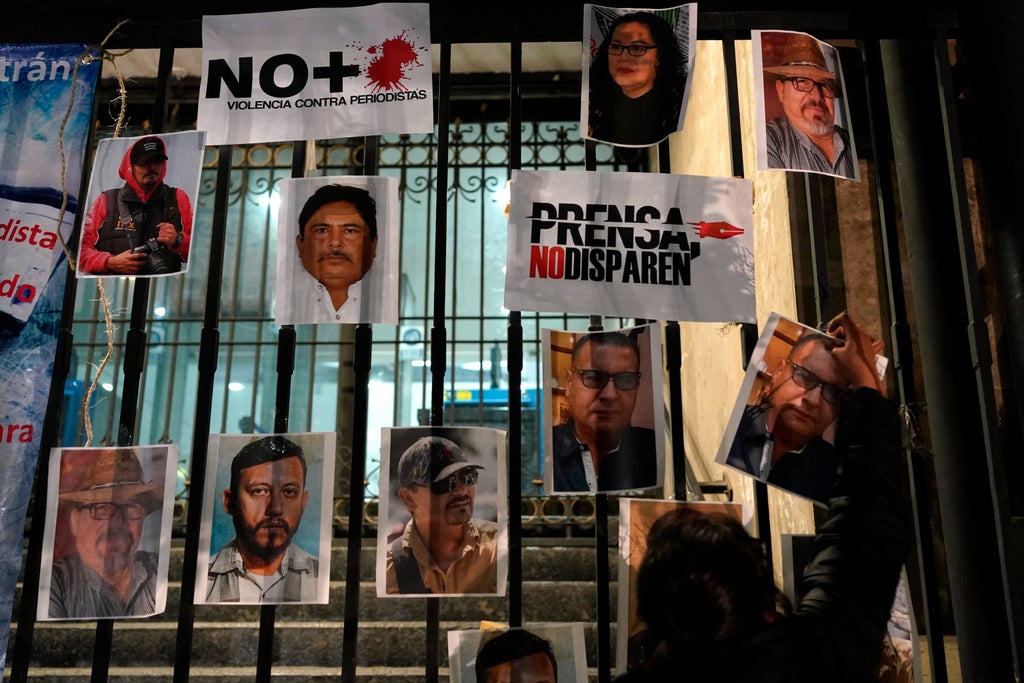 Even as Mexicans lament the killings of five reporters, photographers and videographers in just six weeks, they wonder: How is this happening, despite a 10-year-old program that is meant to protect journalists?

Officials say the program — which works with local and federal authorities to provide journalists with alarms and, occasionally, bodyguards — has been successful in shielding some journalists.

But critics say it has failed in some cases, and there is a general agreement that it cannot end the plague of anti-media violence in a country where corruption is endemic and criminals can avoid prosecution for attacks.

Enrique Irazoque Palazuelos, head of the agency that administers the Protection Mechanism for Human Rights Defenders and Journalists, is adamant: “The mechanism, let there be no doubt, has saved lives.”

Irazoque points out that out of the 140 defenders and journalists killed since December 2018, “only six people were in the mechanism.” Among those not enrolled: the most recent victim, Heber López, director of the online news site Noticias Web, shot to death Thursday in the southern state of Oaxaca

International organizations continue to consider the country as the most dangerous in the Western Hemisphere to practice journalism, and the Committee to Protect Journalists declared these six weeks the “deadliest for the Mexican press in over a decade.”

Aside from López, the dead include:

–Crime photographer Margarito Martínez, gunned down outside his Tijuana home on Jan. 17.

–Reporter Lourdes Maldonado López, found shot to death inside her car in Tijuana on Jan. 23.

–Roberto Toledo, a camera operator and video editor for the online site Monitor Michoacan shot Jan. 31 as he prepared for an interview in the western state of Michoacan.

Before López’s death, Irazoque said the government counted 54 journalists murdered since the current administration took power in December 2018. According to its own analysis, the attacks come mainly from municipal authorities (40%) and organized crime (around 30%). Private groups cite lower numbers, including the CPJ, which says 33 journalists have died.

President Andrés Manuel López Obrador has concentrated more on his grievances with the media than on the violence against reporters. On Friday, just a day after López’s death, he went on a half-hour rant against journalists who have criticized him. “How many of them are against me? The majority!” I have thundered.

It was only in response to a reporter’s question at the end of the news conference that he described López’s killing as “regrettable.” He said the protection mechanism “is being improved.”

And in fact, there has been an increase in participation under his administration. Irazoque says it is because of the rise in violence in some regions and because the program has done a better job.

When López Obrador took over, there were 798 people enrolled, including human rights defenders and journalists. Currently, there are 1,518 people covered by the program, including 495 journalists.

Participants receive support, such as electronic devices or “panic buttons” to alert the authorities to any threat; surveillance systems in their homes; even bodyguards.

Irazoque said, the program has issued 1,300 electronic security devices. It has also assigned more than 200 bodyguards, and has established about 75 safe houses for those under its protection and their families. The program has also helped to reinforce security in some 400 homes.

“Obviously the mechanism does not have the capacity to change the violence, sometimes generalized, in certain areas of various states,” Irazoque said. “That’s not what the mechanism was made for.”

Jan-Albert Hootsen, the CPJ’s representative in Mexico agrees that the mechanism alone cannot resolve the issue of violence. The biggest problem, he told the AP, is that criminals often act with impunity; the only remedy, he said, was to improve the police and prosecutors.

He said that while there have been many cases where there’s been good protection, there have also been failures. He recalled the case of Gustavo Sánchez Cabrera, a Mexican reporter shot to death on June, 2021, in the southern state of Oaxaca, who had asked for protection.

He said that Sánchez Cabrera had been accepted into the program, and he was going to receive bodyguards, but the coordination between federal and state authorities failed. “Police protection never came,” Hootsen said. “The situation was clearly critical, because I ended up riddled.”

Days after Lourdes Maldonado was shot to death, local radio and television reporter Odilón García criticized the program. He knew it well; he was under its protection for three years.

“They give you a small phone and if something happens, you can call and the call goes out to a central office that notifies the police, who will then locate you, and in the meantime, you’re already dead,” he said.