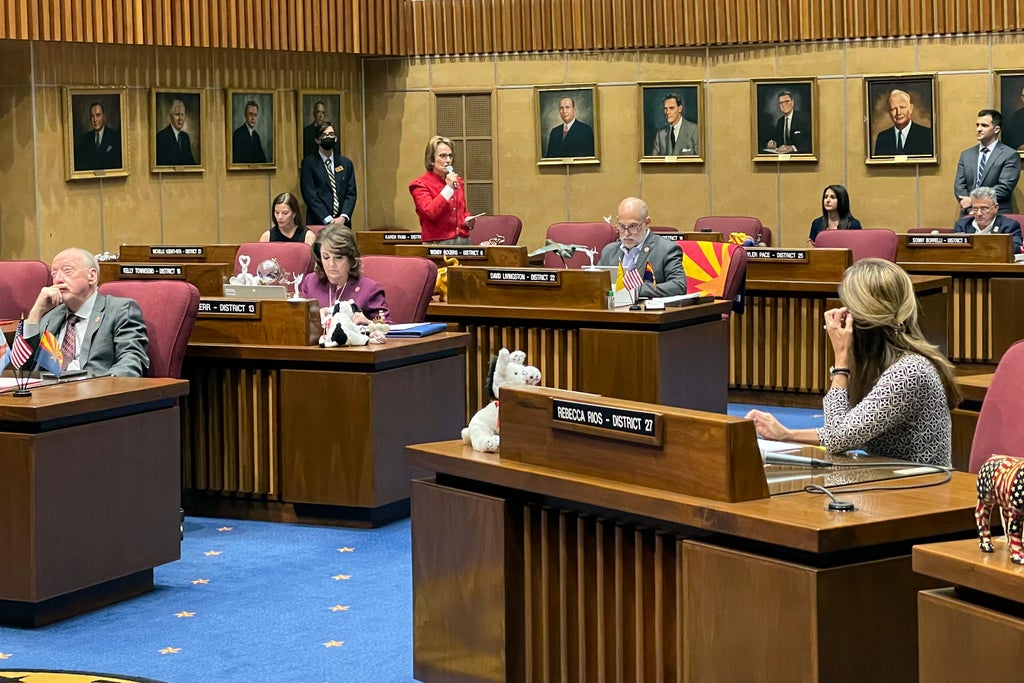 Rogers is in her first term in elected office but has built a national profile among the far right with inflammatory rhetoric and vociferous support for former President Donald Trump’s false claims that the 2020 election was stolen from him.

Rogers has long faced fierce opposition from Democrats and a handful of Republicans for offensive comments on social media.

Pressure mounted within the GOP this week after she said over the weekend that her political opponents should face a “newly built set of gallows.” She spoke in a video played at the America First Political Action Conference, a white nationalist gathering.

“We do support First Amendment freedom of speech,” said Republican Senate President Karen Fann, who voted to censure. “We absolutely support it. We fight battles over it. But what we do not condone is members threatening each other. To ruin each other. To incite violence. To call us communists. We don’t do that to each other.”

The censorship, a formal condemnation that carries no practical consequences, was approved in a 24-3 vote, with all Democrats and most Republicans in support.

Rogers stood as Senate Majority Leader Rick Gray read the censorship aloud. When it was her turn to speak, she portrayed the censorship as an attack on her constituents and her supporters of her.

“You’re really censoring them,” Rogers said. “I do not apologize. I will not back down. And I’m sorely disappointed in the leadership of this body for colluding with the Democrats to attempt to destroy my reputation.”

See also  "Something has happened that no one expected": the two great forgotten of Real Madrid's success | The spar

Hours earlier, Rogers said on Twitter that Tuesday “is the day where we find out if the Communists in the GOP throw the sweet grandma under the bus for being white.”

She sat and listened, often smiling, while her colleagues condemned her.

Rogers has trumpeted her ties to right wing militias, and her prolific posting on social media has included messages and imagery with antisemitic tropes. Most recently, she has also tweeted critically about Ukraine and its president, Volodymyr Zelenskyy, as they fight back against a Russian invasion.

Rogers said Zelenskyy, who is Jewish, “is a globalist puppet for Soros and the Clintons,” referring to the Jewish billionaire donor George Soros.

She was elected with support from the state’s top Republican officials and donors, who poured money into her 2020 race to secure the GOP’s one-seat majority in the Senate.

Republican Gov. Doug Ducey, whose political action committee spent hundreds of thousands of dollars to help Rogers eke out a win, said last week “she’s still better than her opponent of her.”

“What I need as a governor are governing majorities,” Ducey told reporters. He has not walked back his support of him even as a growing number of Republicans condemned Rogers, and he did not immediately comment on the Senate censorship.

Rogers has parlayed her national profile into fundraising prowess, raising unprecedented amounts of money for a state legislative race.

The censorship of Rogers, believed to be the first censorship of an Arizona lawmaker in decades, was formally based on her threats to hang political opponents.

See also  House of the Dragon: Release date, trailer, and cast of Game of Thrones show

Democrats said the censorship was long overdue. Some said it was insufficient and called for expelling Rogers from the chamber.

“I don’t believe our action today will have any affect on this behavior,” said state Senate Minority Leader Rebecca Rios, the top Democrat. “But it must be done.”