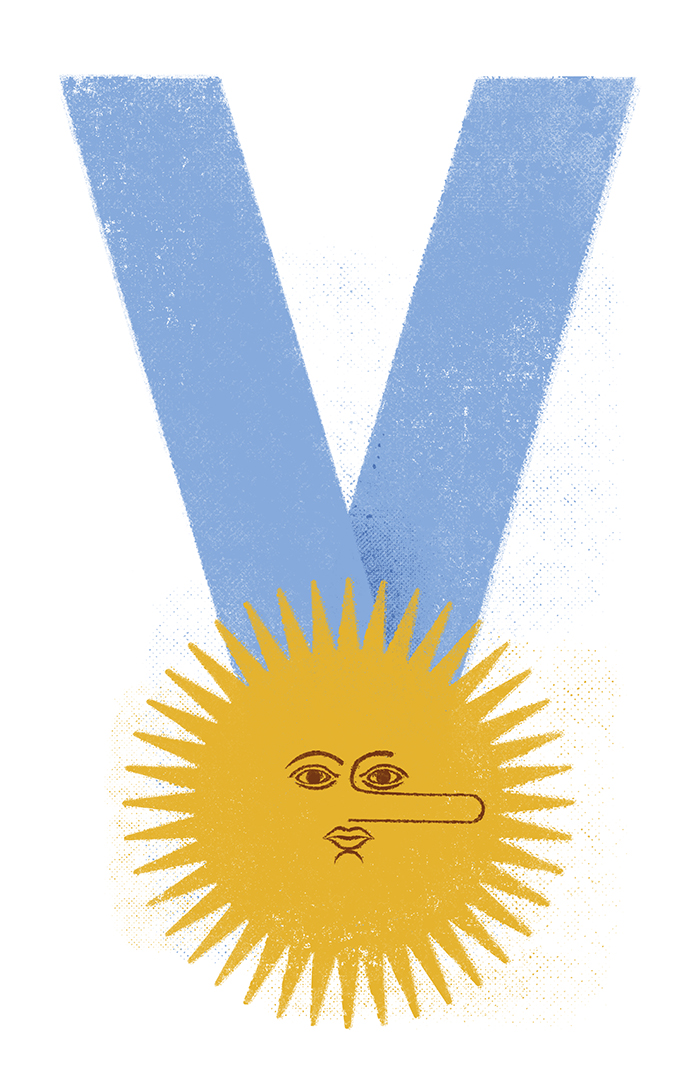 On the night of the worst Peronist election in history, President Alberto Fernández came out to celebrate an imaginary victory. Peronism had just lost the automatic majority it had enjoyed in the Senate since 1983, falling behind Juntos por el Cambio (former president Mauricio Macri’s party) by nine points at the national level. The same legislative election showed him defeated by a landslide in the main provinces: Córdoba, Santa Fe, Mendoza, Entre Ríos, Corrientes, and even in Santa Cruz, a Kirchner fiefdom for decades, where the surname Kirchner landed in a humiliating third place. However, Alberto Fernández chose to be faithful to his style of government: he remained untouched by reality.

Alberto called to celebrate the triumph “as appropriate” and fill the Plaza de Mayo; Leandro Santoro, who lost by 23 points to María Eugenia Vidal in the City of Buenos Aires, spoke excitedly about what an “extraordinary choice” had been for him; Axel Kicillof was even more exultant than when he really won (in 2019, when he was elected governor of the province, he gave a bitter and furious speech). They all hugged and kissed effusively; also the pandemic was over. With an Alberto worthy of a Silver Shell for Best Actor at the San Sebastián film festival.

Celebrating that you have won, when you know you have lost, must be an exciting vertigo. On the other hand, who could care about lukewarm and bland electoral arithmetic? That one plus one equals two, or that 41.97% is a number greater than 33%?

Unlike the defeat suffered by the Government in the primaries in September, which produced hysterical resignations of ministers of the National Cabinet, and leaked audios where a Christian deputy referred to the president disparagingly as a “squatter” of the Casa Rosada, this time the The ruling party was more cohesive. Exquisitely choreographed by the Catalan strategist Antoni Gutiérrez-Rubí, the careful staging of victory in full defeat ended up saying much more about the Government than a simple trick of manipulating media perception. You can’t always see how easy it is for politicians to simulate an authentic sensation. One assumes they lie, but it is not always easy to appreciate the explicit degree of calculation, design, and performance in the lie. How will it feel to party the way you won and didn’t get beat up? The government campaign had consisted of posters that said “yes”, and 67% of the people had said “no”. What if it really didn’t matter? Is the political caste the land of amorality? What if the Machiavellian lie is not an instrument of use in extremisbut its more consistent policy? Truth and lies would be the same thing for Kirchnerism.

Argentina is a country to charge entry, as Jorge says Turkish Assisi, but that night there was something else. We live in post-truth, who can say what is true and what is not? The metaverse of Antoni asks us. Perón said that “the only truth is reality”: if that is post-truth, will this be post-Peronism? Until now, the Kirchnerist story was an emanation from the throat of Cristina Kirchner: a voice that needs the rhythm of a feat, and that seems to be the meaning of politics for Kirchnerism. And in that feat, Cristina Kirchner must always be the winner, and that is why her absence was the indisputable proof of defeat. In addition, because a defeat is equivalent to an avalanche of legal cases that is activated in avalanche against her. He excused himself as soon as the count started, tweeting that his doctor asked him to rest; she becomes invisible in failures, even if they dress them in silk.

I have been told rest. Nothing to worry about, but the effort made to participate in the closure of the FdT delayed the postoperative evolution. Therefore, tonight I will not be able to be, as I would have liked and as I have always done, in the bunker. I hug everyone and everyone.

Cristina did not lend herself to the farce that followed the tragedy, according to the apothegm that she likes so much about Karl Marx. She seems to be the only person attentive to the reality of the Peronist debacle. In 2019, her electoral experiment (which consisted of putting someone who defenestrated her, as president) achieved 48%; two years later, that same force – united Peronism – obtained 33%. 33% was always her treasure and her roof: that third of the population that belongs to her and accompanies her wherever she is, her wild flowers arising from the poorest mud of the Buenos Aires suburbs, where Cristina is queen. Now, the united Peronism is reduced to that 33% that she brought as a dowry, while the contribution of her partners disappears. Alberto wastes his political capital daily, and she barely manages to retain her addicted districts. By force of the “Plan Platita”, the distribution of cash, bicycles and refrigerators in the popular neighborhoods in exchange for votes. The clientelism is not hidden: it is the essence of the politics of Kirchnerism.

How to make populism without popularity? Only the bombastic, worn speech remains, and the old, repeated measures that did not work before and not now, but retain the nostalgic glow of another era. Kirchnerism is only capable of managing symbols: its art is to reconstruct and modify the past. Kirchnerism is its own museum of measures, traps and state tricks in permanent devaluation. The night of the defeat-triumph was interesting because it allowed the Government Act his own disconnection with the data of the present, while young people turn their backs on him and his political wealth collapses. “We had to lose by winning, they may have won by losing,” Victoria Tolosa Paz, who lost by one point in the Province, chiseled for further confusion. Distracted, the Catalan advisor could not remember Borges’s famous phrase: defeat has a dignity that noisy victory does not deserve.

Oloixarac fields is a writer. His latest novel is Mona (Literatura Random House).