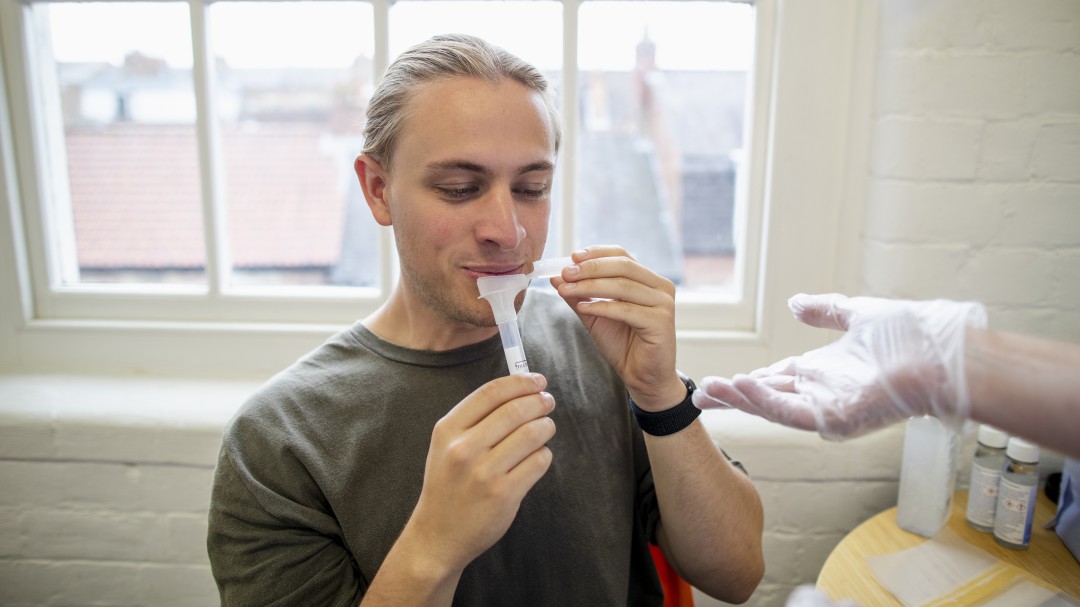 Taking a sample to self-diagnose at home if a person has COVID is not as simple for everyone and the process is more complicated when it comes to children. Pediatricians like María Fernández check it daily when children with symptoms go to the hospital: “Many children arrive with a nasopharyngeal antigen test recently done at home that is negative and when we do it it is positive, and that, in most of the cases is because the technique has not been adequate, because you have to insert the swab all the way in and in children this is complicated.That is why we also see that many parents opt for the saliva test, but we are also finding many false negatives. In the hospital we do a nasopharyngeal antigen test and it comes out almost 100% positive, so we have the feeling that the saliva test is not worth much, probably because it does not reach a sufficient viral load to to detect it.” In the event that the saliva tests are negative and direct contact has been maintained with an infected person, the toilets recommend repeating the test to ensure.

María Jesús Escribano, technical director of the Official College of Pharmacists of Madrid, recalls that the salvo tests have “high precision, similar to the nasal test, and also have very high sensitivity and specificity, similar to self-diagnostic tests that use nasal samples. “. Many pharmacists and doctors point out that this type of test is usually acquired for children, given the difficulty of doing the nasal smear for antigen tests, but they warn that it is not easy to take a sample so that this type of test is really efficient. test, not even for an adult.

The pharmacist Marián García, better known as Apothecary Garcia, wanted to check it out during his COVID isolation. I performed antigen and saliva tests daily, and observed the difference in results between the two: “This doesn’t prove anything. It’s just me playing the guinea pig with myself. But after obtaining three very timid, almost imperceptible positives with saliva tests, in the peak moment of the infection, when the nasal tests in parallel give jet black, I wonder if it is really easy to obtain “the perfect smear”, he wondered.Even in a television program he explained what that sputum should be like.

How to do a saliva test in the best possible way?

It should be done when there are symptoms compatible with COVID-19 or there has been close contact with a positive person, for more than 15 minutes and without protective measures.

It is recommended that 30 minutes before taking the sample, you do not consume food or drink, nor do you smoke or take gum, since this may affect the test result.

To perform the test, the manufacturer’s instructions must always be followed. In general, what is requested is to cough several times beforehand so that the saliva rises from the throat to the mouth.

In general, when taking the sample, at least 1 ml of saliva should be obtained and, before mixing the sample with the corresponding reagent, wait until there are no bubbles left to prevent the result from being inaccurate.