The decision of the multinational steel company ArcelorMittal of doing “short and selective stops” of production at certain times due to the high costs of electricity will affect the Gipuzkoan plants of Olaberria and Bergara.

As confirmed by company sources, these stops are already taking place in other plants in Europe at times when the impact of the cost of electricity is greater.

ArcelorMittal Europe’s decision only affects the long products business of electric steel mills, as is the case of the Olaberria and Bergara plants, cataloged by the multinational as a single production center and totaling 510 workers.

The Olaberria steelworks produces medium sections for construction, while the Bergara mill processes the semi-finished product that arrives from the first and produces light sections for the same sector.

The company has admitted that it has been forced to carry out a “short and selective production pause” in some of its electric arc furnaces in Europe that make some products, generally used in the construction sector.

According to ArcelorMittal, this measure responds to daily changes in energy prices, “which is a great challenge to produce steel at economic costs”, although it does not expect this measure to have a strong impact on the volume of its production or its ability to meet customer demand.

In the Basque Country, ArcelorMittal has four other plants that will not be affected: the of Zumarraga, who distributes junk; that of Etxebarri, that produces tin and sheet metal; that of Sestao, that, despite being an electric steel mill, it manufactures flat products (specifically hot rolled coil); and the plant Lesaka, which produces galvanized and pre-lacquered products.

The decision will not affect the Asturian plants in Gijón and Avilés, which have about 5,000 workers, the bulk of the multinational’s workforce in Spain, which amounts to almost 8,000 employees.

Apart from those in the Basque Country and Asturias, the rest of the plants that the company has in Spain are located in Pedrola (Aragon), Sagunto (Valencia) and Villaverde (Madrid).

ArcelorMittal produces around 40 million tonnes of steel per year in Europe, of which 10 are for the construction sector. 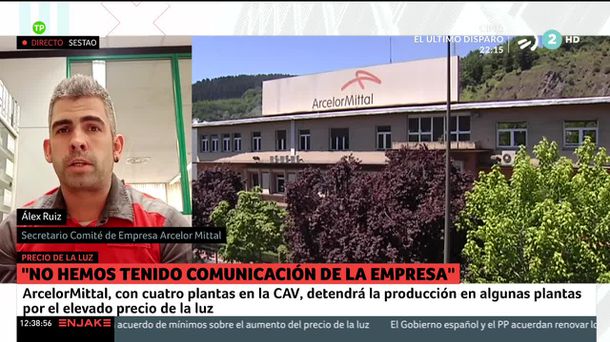 Álex Ruiz, secretary of the ArcelorMittal Works Council, assured this morning in En Jake that the workers have not yet received a communication from the company announcing the stops. In any case, he thinks that it would not be strange, seeing that Sidenor has adopted a similar measure: “At the end of the day, we all melt in the same way, with electric furnaces, and it is clear that the energy costs, not only those of the light, but also gas, weigh us down competitiveness “.

According to Ruiz, if the stops were short or infrequent, “that time in which production stops could be used for maintenance work or training”; However, if the stops were more frequent, it would probably be necessary to use tools such as ERTES “which provide certain protection to the worker”.