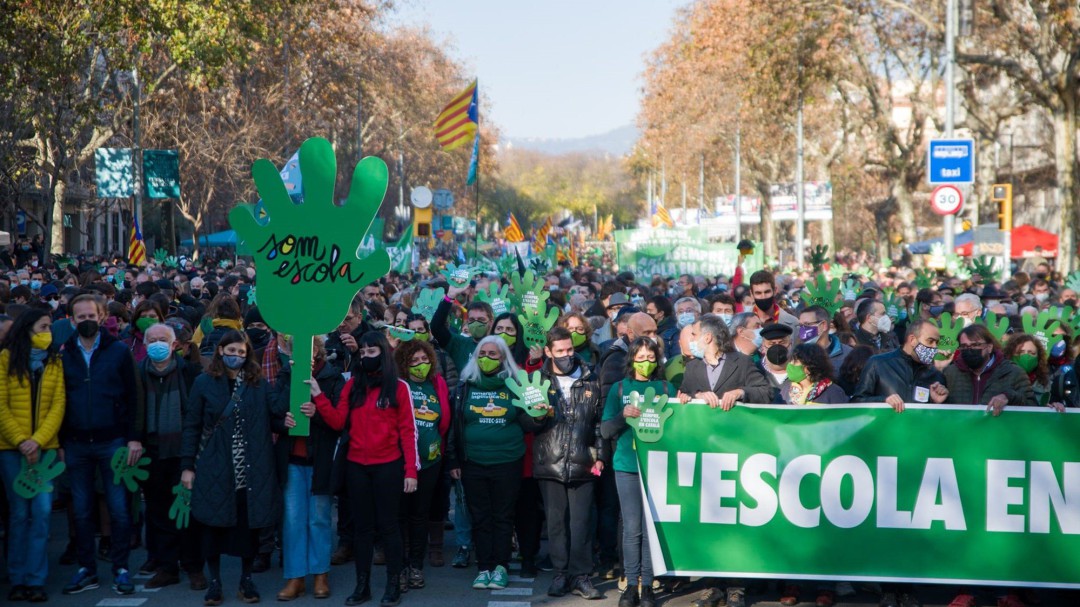 The demonstration of the Somescola platform, against the decision of the Supreme Court (TS) that established a minimum of 25% of teaching in Spanish in the Catalan educational system, began this Saturday in Barcelona at around 11.30 am.

Under the motto ‘Ara i semper, l’escola en català’ (Now and forever, school in Catalan), thousands of people have started the march in Plaza Tetuán in Barcelona, ​​and have started to go down Paseo Sant Joan. It is planned to parade to the Lluís Companys promenade, in front of the Superior Court of Justice of Catalonia (TSJC), where a protest act will be held.

Chants such as ‘En Canet, solidarity’ have been heard among the protesters, and those present carry star flags. The protest was also attended by the President of the Generalitat, Pere Aragonès, who warned at the beginning of “the offensive of Spanish nationalism, which wants to use Catalan schools” to undermine social cohesion in the community in order to “scratch four votes, not in Catalonia, but outside Catalonia.”

“Therefore, Catalan society has to respond with the utmost cohesion”, stressed Aragonès, who stressed that “the linguistic model of the Catalan school has the consensus of the educational community, social consensus, academic and pedagogical consensus , and also the political consensus built through the different decisions that the Parliament has been adopting for about 10 years with the Education Law of Catalonia “.

The demonstration was also attended by the president of the Parliament, Laura Borràs, representatives of ERC, Junts, the CUP and the comuns, but not with members of the PSC, who this same weekend held an Extraordinary Congress of their party.

Aragonés announces that they will sue Pablo Casado

The President of the Generalitat de Catalunya, Pere Aragonès, has announced through your Twitter account that the legal services of the Government are studying filing a complaint against the president of the PP, Pablo Casado, for some statements he made yesterday about teaching in schools in Catalonia.

Married, in the midst of the controversy over the teaching of Catalan and Spanish in Catalan schools, he affirmed yesterday at a ceremony in Galicia that in Catalonia “there are teachers with instructions not to let children go to the toilet because they speak Spanish.”

He also said that “the children of national police officers and civil guards are pointed out in class and it is said that they cannot be integrated” and that there are children who are put “stones in their backpacks” for speaking Spanish in the yard. .

The Catalan president, in a message on social networks, has indicated that the Generalitat’s legal services are studying “these infamous statements.” “We will always defend the truth and the teachers from indecent attacks like this one,” said Aragonès. “Leave education alone. Enough of the lies. Enough of this moral baseness. Enough of stoking hatred,” concluded the message of the President of the Generalitat.