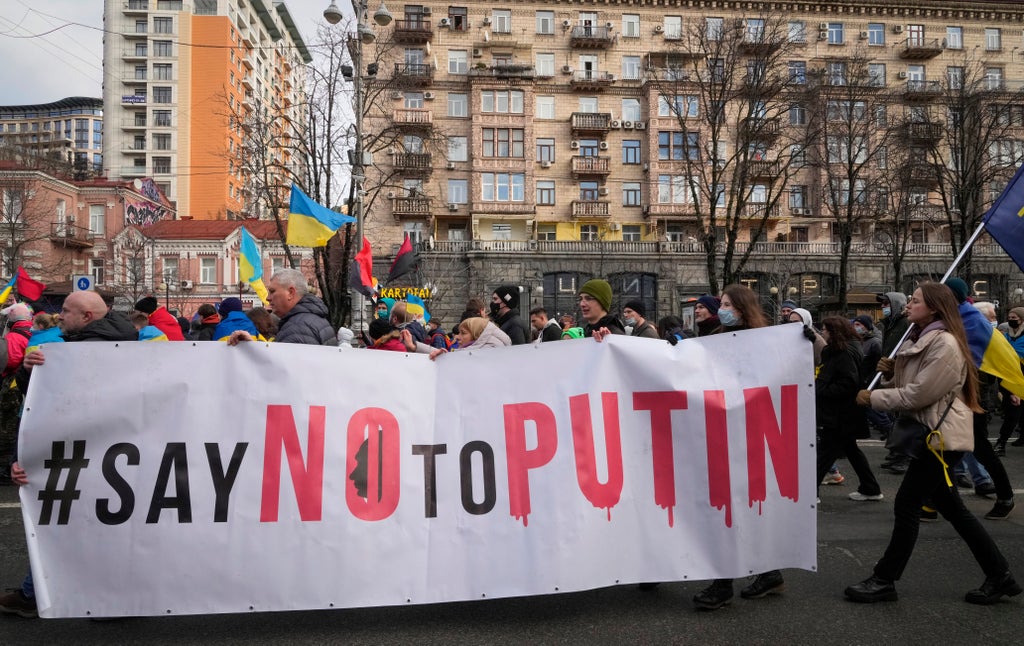 GERMANY-RUSSIA-UKRAINE — German Chancellor Olaf Scholz is flying to Ukraine and Russia this week in an effort to help defuse escalating tensions as Western intelligence officials warn that a Russian invasion of Ukraine is increasingly imminent. Scholz has repeatedly said that Moscow would pay a “high price” in the event of an attack, but his government’s refusal to supply lethal weapons to Ukraine or to spell out which sanctions it would support against Russia has drawn criticism abroad and at home and raised questions about Berlin’s resolve in standing up to Russia. By Kirsten Grieshaber. SENT: 870 words, photos.

For full coverage of Ukraine.

KOREAS-JAPAN — US Secretary of State Antony Blinken has met his Japanese and South Korean counterparts in Hawaii to discuss the threat posed by nuclear-armed North Korea after Pyongyang began the year with a series of missile tests. Blinken told journalists at a news conference after Saturday’s meeting that North Korea was “in a phase of provocation” and the three countries condemned the recent missile launches. By Audrey McAvoy. SENT: 710 words, photos.

LEBANON-HAMRA STREET — Hamra Street at one time represented everything that was glamorous about Beirut. In the 1960s and 1970s, it was where the great singers of the Arab world performed, where intellectuals and artists hung out in the cafes and where European, American, Arab and Lebanese shoppers came to buy. Now, many of its stores are shuttered. Poverty-stricken Lebanese and Syrian refugees beg on its sidewalks. The streetlights barely come on. Like the rest of the country, Lebanon’s economic crisis swept through the street like a destructive storm. Longtime Hamra Street residents fear it will never be able to bounce back. By Bassem Mroue SENT: 1,290 words, photos. An abridged version of this story is also available.

OLY-ASIAN AMERICAN WOMEN — Across two pandemic Olympics set in Asian countries, Asian American women facing the Games have encountered a whiplashing duality — prized on the global stage for their medal-winning talent, buffeted by the escalating crisis of racist abuse at home. The world’s most elite and international sporting event, which pits athletes and countries against each other, underscores along the way the crude reality that many Asian women face: of only being seen when they have something to offer. By Sally Ho. SENT: 1,040 words, photos. WITH OLY-BEIJING-OLYMPICS-THE LATEST

OLY–HKW-FINLAND-CONSOLING-OSAWA — As players gathered at their respective blue lines to honor their opponents following the game, Michelle Karvinen of Finland immediately noticed Japan captain Chiho Osawa growing emotional across the way. Karvinen for a moment put aside the joy of Finland advancing to the Olympic women’s hockey semifinals after a 7-1 win Saturday that eliminated Japan. By John Warwow. SENT: 570 words, photos.

OLY-HALFWAY THERE-EXPLAINER — COVID restrictions. A “closed loop” restricting everyone’s movements. Some most excellent athletic achievement and, yes, a Russian doping scandal. The Beijing Winter Olympics have reached the halfway point. AP’s interim global sports editor, Howie Rumberg, says that despite all the restrictions and COVID protocols and a general lack of that Olympic spirit, the athletes are still enthralling. He says the Russian doping scandal is the biggest hiccup of the Games so far and is “heartbreaking.” SENT: 540 words, photos.

BEIJING-SNAPSHOT INTO THE MOUNTAINS — The journey from the heart of Beijing to the alpine ski venue is only about 120 kilometers (75 miles), but getting there via the Olympic transit system — hermetically sealed against COVID-19 — makes for a rather epic journey. SENT: 380 words, photos.

OLY-WATCHING VALIEVA — The 15-year-old figure skating superstar at the center of Russia’s latest doping scandal seems to be the only one that hasn’t had a word to say about it. Instead, Kamilia Valieva continues to practice for her competition de ella at the Beijing Olympics while the Court of Arbitration for Sport decides whether she is allowed to compete. SENT: 830 words, photos.

OLY-VLHOVA OUT — Slalom gold medalist Petra Vlhova is leaving the Beijing Olympics early due to an inflamed left ankle tendon and will miss the Alpine combined event in which she would have been a challenger to Mikaela Shiffrin. SENT: 210 words, photos.

OLY-TAIWAN-GETTING BACK UP — When 19-year old Maggie Lee fell on her first run down the slope and missed one of the early gates, it looked like the abrupt end of her first Olympics. It wasn’t. She got back up. SENT: 450 words, photos.

OLY-GLIMPSES SNOWY BEIJING — The Beijing Olympics have been watched closely for snow — the artificial kind, made by machines, up in the mountains outside the city. On Sunday morning, a more natural variety coated the Chinese capital for the first time since the Games began. The world’s athletes — and Beijingers, of course — awakened to a rather vigorous snowfall that cast a placid silence over Olympic Park. SENT: 120 words, photos.

BRAZIL-SOCCER FAN SLAIN — A fan of Sao Paulo-based soccer power Palmeiras has been shot dead outside the club’s stadium amid street violence after the team’s 2-1 loss to Chelsea in the Club World Cup final in Abu Dhabi. SENT: 120 words, photo.

FRANCE ELECTION-SHADOW CAMPAIGN — French President Emmanuel Macron hasn’t officially declared that he’s a candidate for April’s presidential election yet. But he already has a full campaign team and makes speeches about his plans for the country in the upcoming years. Critics say he’s unfairly using his taxpayer-funded presidential pulpit to campaign for a second term while dragging out his widely expected announcement of him as long as possible. SENT: 800 words, photos.

SWITZERLAND-MEDIA SUBSIDIES — It’s a widespread lament: Many traditional newspapers, especially small local ones, and other media outlets have seen subscriptions dry up as international internet behaviors swoop in on their traditional advertising markets. In Switzerland, the government wants to help — but voters get the final say in what polls suggest is becoming an increasingly tight contest. SENT: words, photos. SENT: 540 words, photos.

PAKISTAN BLASPHEMY — Police say an enraged mob has stoned to death a middle-aged man for allegedly desecrating the Quran in a remote village in eastern Pakistan. SENT: 420 words, photos.

IBERIA DROUGHT — Large sections of Spain are experiencing extreme or prolonged drought, with rainfall this winter at only one-third of the average in recent years. The situation is similar in neighboring Portugal, where 45% of the country is now enduring “severe” or “extreme” drought. SENT: 860 words, photos.

GERMANY-PRESIDENT ELECTION — A special parliamentary assembly is meeting to elect Germany’s president for the next five years. Incumbent Frank-Walter Steinmeier, who has been endorsed by most mainstream political parties, is seeking a second term as the largely ceremonial head of state. The president will be elected Sunday. SENT: 320 words, photos.

NICARAGUA-OBIT TORRES — Relatives in Nicaragua say a former Sandinista guerrilla leader who once led a raid that helped free then rebel and now President Daniel Ortega from prison has died. Hugo Torres’ death at age 73 came eight months after Ortega’s government arrested him and dozens of other Nicaraguan opposition leaders. SENT: 730 words, photos.

SUPERBOWL-GREENDAY-MILEY CYRUS — Miley Cyrus has only been alive for about half the Super Bowls ever played, but her setlist on the eve of the 56th spanned the whole history of the big game and then some. Cyrus mashed up songs on Saturday night from the 60s, 80s and 90s with her own de ella at the Bud Light Super Bowl Music Fest. SENT: 600 words, photos.

SAUDI ARABIA-ARAMCO — Saudi Arabia says it will transfer 4% of the stock in the state-run oil giant Aramco to a sovereign wealth fund. Sunday’s infusion, valued at nearly $80 billion, comes as the kingdom tries to overhaul its energy-dependent economy in part with the fund. Saudi Crown Prince Mohammed bin Salman, the assertive son of King Salman, made the decision to transfer the stock. SENT: 400 words, photo.

SUPERBOWL-NBC-COLLINSWORTH — Cris Collinsworth is familiar with unlikely Super Bowl runs by the Cincinnati Bengals. He was part of the first two during his eight-year career with the franchise and has seen their highs and lows during the past 33 years as a commentator and as a northern Kentucky resident. It is only fitting that Collinsworth will be in the broadcast booth for Sunday’s matchup against the Los Angeles Rams. SENT: 750 words, photos.