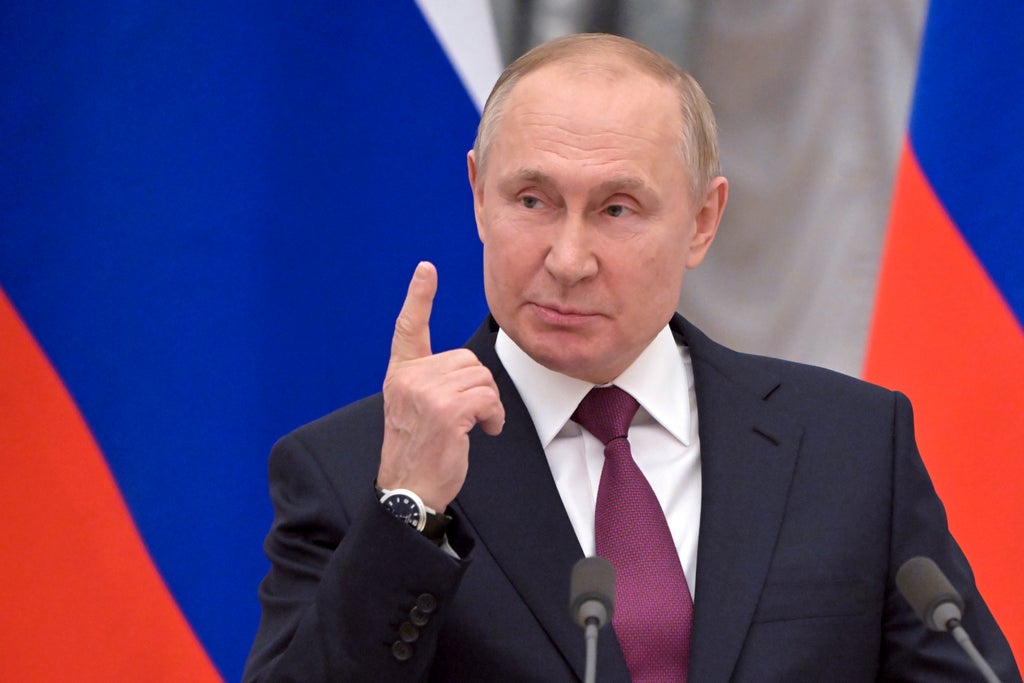 UKRAINE-TENSIONS — Russia made two overtures to ease tensions around Ukraine — reporting a pullback of troops near its neighbor and welcoming talks with the West. But the United States and its allies said they needed evidence of the troop movements and that the threat of a Russian invasion still loomed. By Vladimir Isachenkov, Yuras Karmanau and Aamer Madhani. SENT: 950 words, photos, videos.

UKRAINE-RUSSIA-WIDER WAR? — A Russian invasion and takeover of Ukraine would deliver a blow to European order like none since World War II. The chances of it triggering a wider war would depend partly on President Vladimir Putin’s ambitions, partly on the West’s military response, and partly on plain luck. By National Security Writer Robert Burns. SENT: 820 words, photos. For full coverage of Ukraine.

TIBET AND THE OLYMPICS — Ahead of the Beijing summer Olympics 14 years ago, Tibet was on fire. Deadly clashes between Tibetans and security forces in Lhasa made global headlines, and for weeks, monks and herders battled bullets and batons. Today, Tibet has fallen silent, even as the Olympic games come to Beijing for a second time. The reason, interviews with over a dozen Tibetans show, is that Beijing’s plan to tame Tibet is working. Older Tibetans have largely resigned themselves to Chinese rule, while a new generation of young Tibetans is slowly adopting a Chinese identity. By Dake Kang and Sam McNeil. SENT: 1,720 words, photos. An abridged version of 1,080 words is also available.

VALIEVA-OTHER DRUGS — Russian figure skater Kamila Valieva listed two legal substances used to improve heart function on an anti-doping control form she filled out before her drug case at the Olympics erupted, according to documents submitted in her case. The World Anti-Doping Agency filed a brief in the Valieva case stating that the existence of L-carnitine and Hypoxen, though both legal, undercuts the argument that a banned substance, trimetazidine, might have entered the skater’s system accidentally. By National Writer Eddie Pells. SENT: 460 words, photos. With DOPING-RUSSIA-EXPLAINER — The drug behind Russia’s Olympic doping case; BEIJING-OLYMPICS-THE-LATEST. Also see RAISING THE AGE below.

See also  Key day: the first pig heart transplanted into a human will begin to function without mechanical assistance | Science and Technology

VIRUS OUTBREAK — For the first time in two years for many people, the American workplace is transforming into something that resembles pre-pandemic days. By Retail Writer Anne D’Innocenzio. SENT: 1,010 words, photos.

FREEZING OUT AFRICA — African representation has shriveled at the Beijing Olympics from a record eight nations in 2018 to just five — and with just half the number of athletes. SENT: 990 words, photos.

RAISING THE AGE — The doping case involving Russian figure skater Kamila Valieva has led to many more questions than answers. Some skaters think it’s time to ask another: Should a 15-year-old be in the Olympics at all? By Sports Writer James Ellingworth. SENT: 760 words, photos.

ATHLETES ON-FREE TIME — Football, video games and dress-up are just some of the ways athletes at the Beijing Olympics are keeping busy when they’re not competing. SENT: 820 words, photos.

ATHLETES ON OLYMPIC FOOD — Avocado ice cream and boiling hot pots are some of the best foods athletes say they’ve eaten at the Beijing Olympics. SENT: 680 words, photos. With DAY-11-PHOTO-GALLERY.

MORE ON THE VIRUS OUTBREAK

VIRUS OUTBREAK-HONG KONG — Hospitals in Hong Kong were struggling to keep up with an influx of new coronavirus patients amid record numbers of new infections as the city’s leadership doggedly sticks to its “zero-COVID” strategy, and China’s leader Xi Jinping said it was the local government’s “overriding task” to control the situation. SENT: 580 words, photos.

TRUMP-RUSSIA PROBE-EXPLAINER — The latest filing from special counsel John Durham in his investigation into the origins of the Trump-Russia probe has been seized on by the conservative media and Donald Trump himself as vindication of the former president’s oft-repeated claims that he was “spied” on. But that’s not quite what it says. SENT: 1,050 words, photo.

VIRUS OUTBREAK-BUDGET — The Biden administration is telling Congress it needs an additional $30 billion to press ahead with the fight against COVID-19. SENT: 540 words, photos.

SUPREME COURT-GENERATION XERS — If President Joe Biden’s search for a nominee to the Supreme Court could be summed up by a Help Wanted ad it might read: “Seeking a well-respected liberal jurist. Black. Female. Seniors need not apply.” SENT: 840 words, photos.

SAN FRANCISCO-SCHOOL BOARD RECALL — San Francisco residents have recalled three members of the city’s school board for what critics called misplaced priorities and putting progressive politics over the needs of children during the pandemic. SENT: 800 words, photos.

GEORGE FLOYD-OFFICERS-CIVIL RIGHTS — A former Minneapolis police officer charged in George Floyd’s killing testified that he was relying on his fellow officers to care for Floyd’s medical needs while he controlled traffic and onlookers as police tried to arrest the Black man. SENT: 730 words, photos. UPCOMING: Trial resumes at 10:30 am

HONDURAS-CORRUPTION — The arrest of former Honduran President Juan Orlando Hernández and the images that followed — a leader shackled and paraded before the cameras like a common criminal — were a stunning reversal for a man who for years seemed impervious to growing allegations of corruption. SENT: 780 words, photos.

CHINA-TRADE — The Office of the US Trade Representative issues its annual report on China’s compliance with the World Trade Organization rules. By Economics Writer Paul Wiseman. UPCOMING: 370 words by 5 am

ALEC-BALDWIN-SET-SHOOTING — The family of a cinematographer shot and killed on the set of the film “Rust” sued Alec Baldwin and the movie’s producers alleging their “callous” disregard in the face of safety complaints led directly to her death. By Entertainment Writer Andrew Dalton. SENT: 860 words, photos.

OBIT-PJ-O’ROURKE — PJ O’Rourke, the prolific author and satirist who re-fashioned the irreverence and “Gonzo” journalism of the 1960s counterculture into a distinctive brand of conservative and libertarian commentary, has died at age 74. SENT : 750 words, photos.