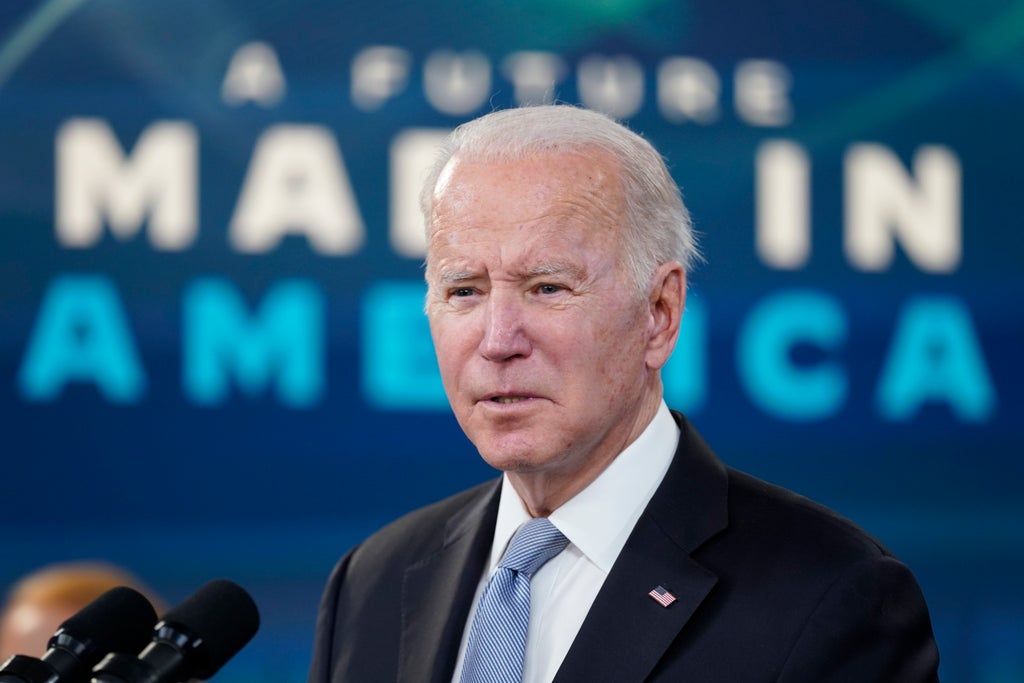 Eager to show benefits from his policies, President Joe Biden is overstating the number of electric vehicle charging stations that would be built with his infrastructure law and claiming a speedy shift to electric in the federal fleet that isn’t so.

Biden says he is fulfilling campaign promises but does not acknowledge that several of his claims rely on passage of a $2 trillion climate and social safety net plan stalled in Congress.

His initiatives will take more than a decade to accomplish if they are completed at all.

A look at claims on electric vehicles and jobs overall:

BIDEN, referring to his December order to make the federal fleet all electric by 2035: “We have 600,000 federal vehicles that we — the federal government owns. They’re going to all end up being electric vehicles.” — Feb. 8 remarks.

THE FACTS: Not so fast.

The US Postal Service, whose 230,000 vehicles make up over a third of the federal fleet, has only committed to making 10% of its electric vehicles, citing cost.

It has already moved to award Oshkosh Defense $482 million as an initial investment to assemble 50,000 to 165,000 Next Generation Delivery Vehicles. The new vehicle is greener than current models, which date to the 1990s, but most still will be powered by gasoline.

Because the average age of a postal vehicle is 30 years, new vehicles purchased now aren’t likely to be replaced again until well past 2035.

The Postal Service said full electrification of its fleet would cost an additional $3.3 billion over the current plan. Money to help pay for a 100% electric fleet is included in Biden’s sweeping Build Back Better plan, but the proposal is stalled in Congress because of objections by Republicans and Democratic Sen. Joe Manchin of West Virginia.

The White House and the Environmental Protection Agency have called for the Postal Service to conduct a new environmental review. White House climate adviser Gina McCarthy acknowledged last week that the administration was “disappointed” by the initial bulk purchase of gas-powered postal vehicles and hopes the Postal Service will change its mind on remaining vehicles.

DeJoy said the initial order, which includes 5,000 electric vehicles, retains “flexibility” to increase the number of EVs “should additional funding become available.” Without such money, “we must make fiscally responsible decisions,” he said.

BIDEN, on switching the federal fleet to electric vehicles: “That’s what it means to finally make Buy in America a reality and not an empty promise.” — Feb. 8 remarks.

BIDEN: “The Federal Government also owns an enormous fleet of vehicles, which we’re going to replace with clean, electric vehicles made right here in America by American workers, creating millions of jobs—a million autoworker jobs in clean energy—and vehicles that are net-zero emissions.” —remarks in January 2021.

THE FACTS: No, the EV fleet won’t be entirely made by US workers. The first sets of new electric vehicles for the federally owned fleet, including those driven by Energy Secretary Jennifer Granholm and Transportation Secretary Pete Buttigieg, are Ford Mustang Mach-E SUVs made in Mexico.

There is plenty of skepticism about Biden’s claim suggesting 1 million net automaker jobs.

If more Americans drive electric vehicles, then it stands that fewer will drive gas-powered ones. And because electric vehicles generally have 30% to 40% fewer parts and are simpler to build, fewer workers will be needed to assemble them. That will require a reshuffling of jobs, as workers who once made engines, transmissions and other components for gas-powered cars have to switch to electric motors and batteries.

BIDEN: “My new infrastructure law is going to build out more than 500,000 charging stations for electric vehicles across the country.” — Jan. 26 remarks at roundtable with CEOs.

THE FACTS: Perhaps eventually, but as it stands now, there won’t be a half million charging stations in the US anytime soon.

The bipartisan legislation approved by Congress ended up providing just half of the $15 billion that Biden had envisioned to fulfill a campaign promise of 500,000 charging stations by 2030.

Biden’s Build Back Better aimed to fill the gap by adding back billions to pay for charging stations. But Manchin in December declared that bill dead in its present form due to cost.

Administration officials now say the infrastructure law will help “pave” the way for up to 500,000 charging outlets by 2030. That’s different than charging stations, which could have several outlets. They say private investments could help fill the gap. Currently there are over 100,000 EV outlets in the US

The Transportation Department’s plan asks states to build a nationwide network of EV charging stations that would place new or upgraded ones every 50 miles along interstate highways. The $5 billion in federal money over five years relies on cooperation from sprawling rural communities in the US, which are less likely to own EVs due to their typically higher price.

States are expected to start construction as early as fall.

TAYLOR GREENE: “Democrats want to use the power of the federal government to force Americans to switch to EVs by 2035 … Biden’s government forced EV plan is really part of the Green New Deal.” — Feb. 11 tweet.

THE FACTS: No, there isn’t a federal mandate to switch to EVs by 2035.

Biden in August signed an order setting a nonbinding goal that 50% of new US car sales be electric by 2030. He wants the US to be zero-emissions economywide by 2050.

Prior to the announcement, several automakers were already moving on their own to increase EV sales, spurred in part by California’s requirement that all new cars sold in that state be electric by 2035. Ford’s CEO says his company expects 40% of its global sales to be electric fully by 2030. General Motors has said it aspires to sell only electric passenger vehicles by 2035. Stellantis, formerly Fiat Chrysler, also pledged over 40% electrified vehicles by 2030.

To meet a 50% target, the auto industry stresses that billions of dollars in electric-vehicle investments in the Build Back Better legislation, including up to $12,500 in tax credits for people who buy electric vehicles, will be vital to meeting those goals. Manchin has expressed a desire to trim at least a portion of the tax credit that is intended for EVs made by unions.

THE FACTS: He takes undue credit. As Trump did before him, Biden glosses over a central reason for historic growth — the US population is far larger than in past decades.

The economy added 6.6 million jobs in 2021, the most on government records dating back to 1939, but part of that is just a natural rebound from what had been the steepest job loss on record in 2020, when 9.4 million jobs were cut in the pandemic’s first year.

And since the late 1970s, the US population has grown by more than 100 million people, so any hiring surges under Biden is bound to be larger in raw numbers than that achieved by his predecessors. On a percentage basis, the number of jobs in the US grew 4.7% in 2021. That is still a sizeable increase — the biggest since 1978 — but not a record-breaker.

Regarding the factory jobs, Biden is right that the 356,000 added in 2021 is the most in many years, specifically since 1994. (The 375,000 figure is the 12-month gain through January). Many manufacturers, in fact, are desperate to hire more workers, and have also struggled with shortages of parts because of tangled supply chains.

Many economists do credit Biden’s $1.9 trillion financial rescue package, approved in March, for accelerating growth and hiring, but some also blame it for fueling a surge in demand that overwhelmed supply chains and pushed inflation up to four-decade highs.

EDITOR’S NOTE — A look at the veracity of claims by political figures.