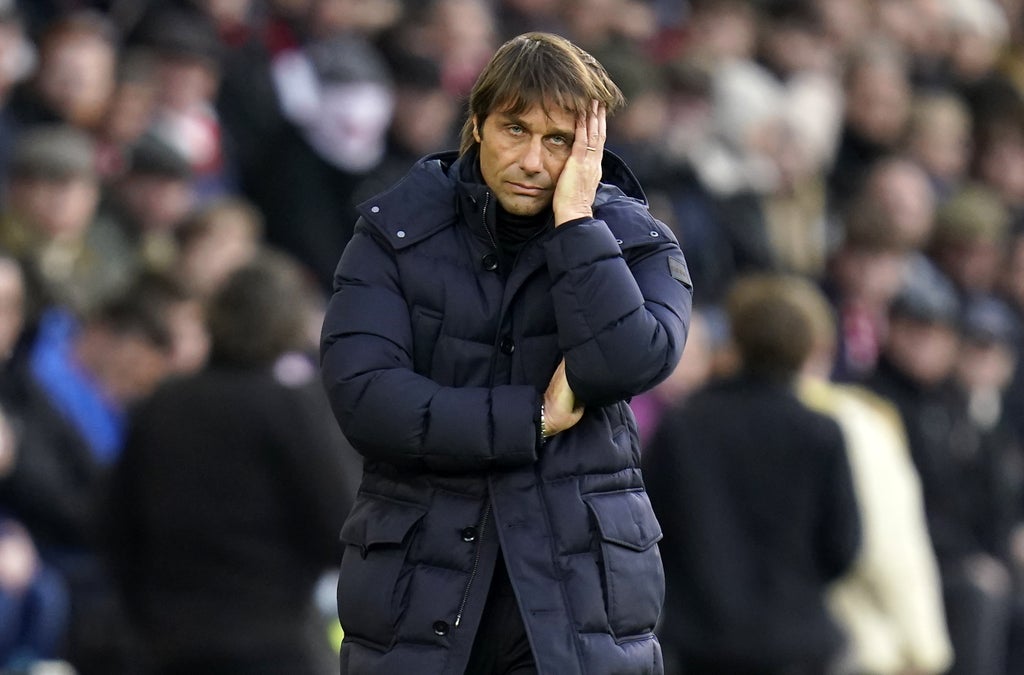 When Tottenham Hotspur officials saw the actual transcription of what Antonio Conte said in interviews this week, they were less aggravated, but still perturbed. There is an anxiety about just how much noise the Italian is causing.

Those close to him would say he’s always like this, and it was the same in his first season at an ailing Internazionale. He then made them champions.

That was a different situation at a different club, though. At Spurs, he’s only making more problems.

The club currently have a lot of them. The obvious positive of Conte’s genius in him as a coach is currently being offset by his difficulty in him as a personality.

The transfer window didn’t go as desired. There’s even the argument, touched upon by the manager himself, that the squad may be weaker than it was in January – at least in terms of numbers. Conte has meanwhile been making clear that standards are not high enough, which a few sources say has affected the confidence of the players.

Many in the game are fairly wondering why he took the job, given he is making it clear it is so below his level. The question on the other side is why Daniel Levy went with a manager of such stature if they weren’t willing to give him the backing to match. It is again as if the appointment was just about the club hanging on to their “big six” status, rather than looking to drive on in the manner a manager like Conte desires.

For Levy’s part, some sources insist that no promises were made to the Italian about January on taking the job, and that he was accepting of this.

A fair counterpoint is that an opportunity to finish in the top four suddenly opened up, and a little bit more investment could have gone very far.

Now, it’s at least possible Conte’s time at Spurs will be short.

The belief among more than a few people in football is that he may already regret taking the job, and that it was linked to Manchester United not being interested. A summer departure isn’t being ruled out. Some of the players fear it. That could have greater consequences than just losing a manager of such stature. Conte’s appointment was one of the few developments that cheered Harry Kane in the last few years. He will again be considering his own future for him, if the manager’s future is another club.

All of this has fed into a run where Spurs have lost three league games in a row, and are in danger of losing four in a row for the first time since November 2004.

These weren’t the sort of standards Conte was supposed to set.

And next up is a trip to Manchester City, the team raising the standards for everyone in Europe. Pep Guardiola’s side have lost eleven since October, and that was a dead rubber in the Champions League to Leipzig.

Their form in the league is 14 wins and one draw from the last 15.

Everything says this match is only going one way.

Spurs certainly have to play one way, but that could yet disrupt things a bit.

It is the little twist about facing City. The very fact playing the English champions is so difficult actually makes your preparation for them relatively easy. Or, at least, makes the choices easy.

You know City will have the ball. You know what they’ll do with it.

You just have to accept you won’t have it, and work around that.

It is this very lack of choice that may actually suit Conte in the circumstances. It offers clarity. It offers focus.

That is what has already been apparent on the Tottenham training ground. The Italian has been trying to drill the players in specific approaches.

That could be all the more influential given how the last few weeks have seen so much uncertainty at Spurs over both personnel and formation. Conte is still trying to figure so much out. Against City, there isn’t much to figure out. It’s just about application, some luck, and taking your chances.

Conte enjoyed exactly that on his first visit to City, with Chelsea, back in December 2016. Chelsea won 3-1 after weathering the storm, and then rampaging through Guardiola’s side on the break. There was even a period around that time when the Catalan feared that Conte’s football may represent an evolution in the game past his own, before naturally adapting himself.

Conte’s current team are someway short of that Chelsea one, sure.

But he similarly knows that Spurs have specific players that can hurt Guardiola’s system, especially in the speed of Son Heung-Min and Lucas Moura.

There’s also the fact that these sorts of games, when everything is loaded in one direction, can have an odd way of diverting down unexpected directions. You only have to look at their last meeting, when Spurs barely had a full team out, at the start of the season.

Conte is particularly good in those situations, too. He knows how to stoke teams, to play on that sense of defiance. That is something he will be asserting to his players from him, pointing to City’s supposed superiority to motivate them.

Conte is also well aware that, for all the doom around Spurs right now, these are the sorts of games that actually offer a chance. They can reignite seasons, and potentially reignite the title race.

This is the advantage of a manager like Conte, too. He has an aura and a history that at least makes players think it’s actually possible.

“The pitch is the truth,” Conte once said at Chelsea. “The pitch speaks.”

It is why the Tottenham hierarchy aren’t yet overly concerned about what he said elsewhere. He has been in this situation at other clubs, like his last job, and still gone on to achieve success.

It’s just that, for a few reasons, like that losing record, this match could represent a juncture.

Conte just needs to convince his players it will be a turn in the right direction. Whether his words from him in the media have eroded that is a big question.