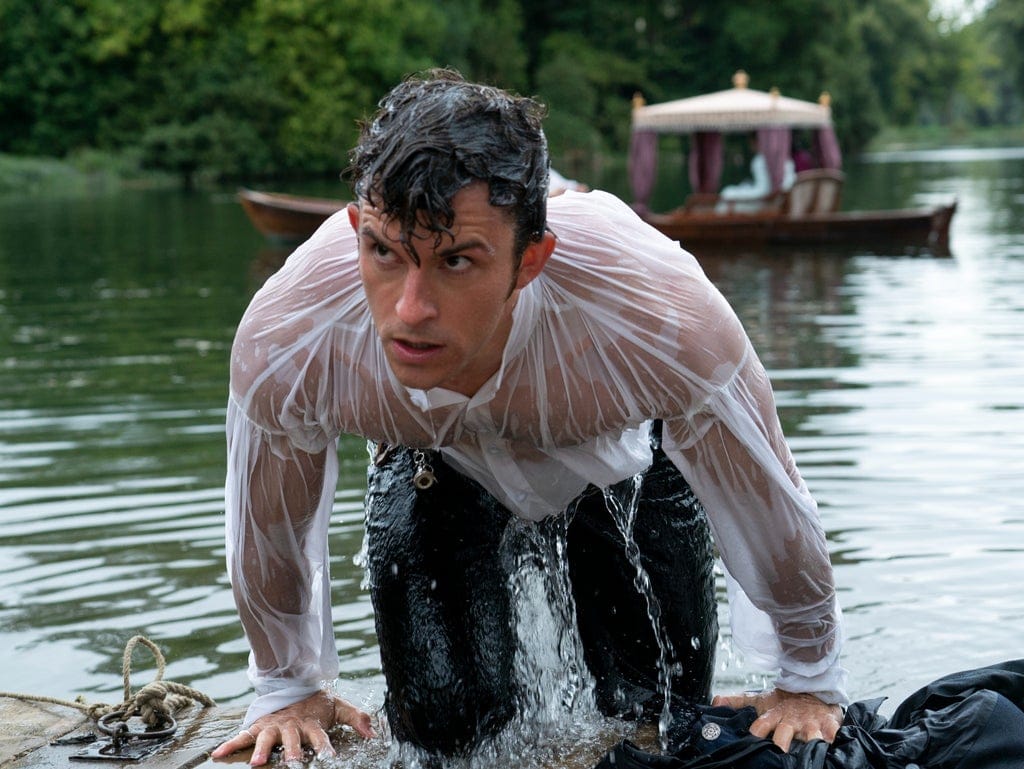 Think of a period drama and a soaked-through white shirt might not be the first thing that comes to mind. But it will surely be the second.

How could it not be, when Colin Firth quite literally changed the nature of TV with his sodden shirt in the BBC’s six-part adaptation of Jane Austen’s Pride and Prejudice?

For those struggling to remember – which, let’s be honest, is probably very few of you – let’s go back to 1995 when Firth, in the role of Austen’s Mr Darcy, caused a cultural ruckus as he strode across our screens post-cold water swim , damp shirt clinging to his torso.

The reaction of viewers is matched by that of Darcy’s future wife, Elizabeth Bennet (Jennifer Ehle), who can barely string a sentence together when faced with his rough and ready appearance.

It was only a matter of time, then, until Firth’s wet shirt moment was reincarnated almost in its entirety for the modern era.

Enter Anthony Bridgerton (played by Jonathan Bailey), the eldest brother in the Bridgerton family and the star of the Netflix drama’s second season.

While last season focused on the love affair between The Duke of Hastings (Regé-Jean Page) and Anthony’s younger sister, Daphne (Phoebe Dynevor), this time around all attention has pivoted to Anthony and his pursuit of romance.

The sexual tension builds between the trio throughout the series, as Anthony becomes engaged to Edwina but it soon becomes apparent that he and Kate have feelings for one another.

Matters come to a head, though, in episode five, when Kate goes for a boat ride with a potential new suitor, only to fill Anthony with jealousy.

After helping Kate out of the boat, and exchanging a series of longing looks with her, Anthony falls backwards and, tripping over a dog, tumbles into the lake, only to emerge seconds later, all paper-thin white shirt and muscular torso.

It’s an apt reiteration when you consider the parallels between Darcy and Anthony. Genre aside, they are both the complicated, brooding anti-heroes, men whose minds you can never quite understand, possibly because they themselves are still trying to work out what it is they want.

And so for Bridgerton to reference Firth’s iconic white shirt moment, well, it makes sense.

Plus, some eagle-eyed viewers have pointed out on Twitter that, last season, a similar moment occurred between the Duke of Hastings and Daphne, when they ran through the rain hand-in-hand with Hastings wearing – you guessed it – a white shirt.

Anthony’s white shirt moment might not carry quite the same sexual charge as the Duke of Hastings’ spoon, but perhaps this is just the start of the wet shirt’s pop culture renaissance. Long may it continue.

See also  'You're not alone': Pals nominated for equality and diversity honor at Young Scot Awards