Tens of thousands of people have participated in the demonstration called this afternoon in Barcelona by the ANC and other sovereign entities to vindicate compliance with the “mandate” of 1-O, one year after the independence referendum.

The Urban Guard has encrypted in 180.000 the number of people attending the march, which was joined by various members of the Government and which ran from Plaça Catalunya to the Parliament, where the protesters were received by the Catalan president, Quim Torra, and the president of the Chamber Catalan, Roger Torrent.

At the head, several citizens carried ballot boxes used on the day of the referendum – delivered to the Parliament as a symbol of the “mandate of October 1” that they claim to fulfill – and behind them was a banner with the motto “1-O, neither forget nor forgive”.

The protesters have advanced between numerous stellate flags, a large banner with the motto -in English- “Self-determination is a human right”, posters that ask “Freedom political prisoners” and shouts of “Independence”, “The streets will always be ours” “Without disobedience there is no independence” and “Let’s open the jails”.

Screams have also been heard calling for the “resignation” of the Minister of the Interior, Miquel Buch, whose dismissal has been requested by the CUP and the Committees for the Defense of the Republic (CDR) for the charges last Saturday in the independence mobilization in Barcelona.

See also  What is fuel duty and how will the cut affect prices?

When the bulk of the march arrived at the Parque de la Ciutadella, the protesters carrying ballot boxes from the municipalities where there were police charges have been depositing the written messages that citizens had left inside it in another giant ballot box.

When Torra y Torrent have left the Parliament to approach the stage installed in front of the façade, a part of the protesters has whistled them, amid shouts of “Buch resign”, “Puigdemont, our president”, “We have voted, patience has run out” or “The people rule, the government obeys.”

The manifesto of the ‘October 1 Platform’, which groups together the convening entities, highlights that, despite the fact that it won the ‘yes’ in the referendum a year ago, “the” Catalan republic did not become effective “for, among other reasons,” the 155, the prison, exile “and” disagreement “between sovereign forces.

The text calls for recovering what “catapulted the referendum to success”: “will, commitment, intelligence, strategy, firmness, perseverance, disobedience, non-violence, hope, popular self-organization and, especially, unity”, since this last element in sovereignty it is “essential if you want to achieve the Catalan republic”, highlights the document.

During the event, messages from citizens collected by sovereign entities in recent days, related to 1-O, have been read and one of them has been especially applauded: “Abandon submission to the Spanish State and autonomy or resign”.

Incidents before the Parliament and the Police station

The mobilization ended around 8:30 p.m. before the Parliament with boos to the president of the Generalitat, Quim Torra, and scenes of tension between protesters and Mossos d’Esquadra.

See also  Living with HIV in times of Covid-19

The protesters have torn down some fences and thrown them at the agents, who have also thrown paint, flag poles and water bottles, and have even physically confronted the volunteers of the ANC and other organizations organizing the mobilization. , who tried to appease the spirits.

After 9:00 p.m., the Mossos charged against a group of protesters who had deviated and, instead of going to the Parliament, had concentrated in front of the Higher Headquarters of the National Police, on Via Laietana.

After 22:00 hours, the Mossos riot agents have also charged against the protesters concentrated at the gates of the Parliament, which they have not been able to access because the entrance was blocked.

VIDEO | Police charges before the Parliament and in Vía Laietana 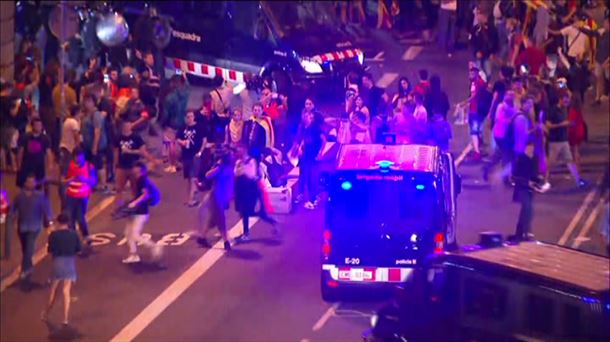