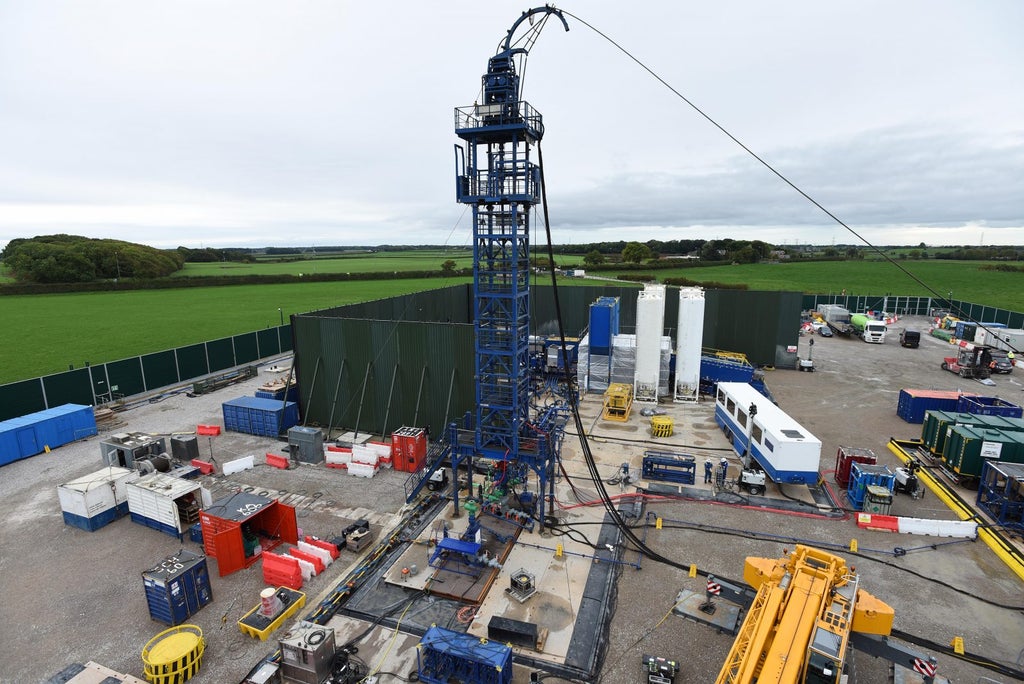 Ministers were facing calls not to back down on the fracking ban amid suggestions of a possible rethink as the UK phases out Russian oil to punish its invasion of Ukraine.

Environmental campaigners warned that reconsidering the moratorium on hydraulic fracturing for gas would be a waste of time with “no impact on our energy bills”.

The Government was working to find alternate supplies of energy after committing to phase out imports of Russian President Vladimir Putin’s oil by the end of the year, amid soaring energy costs.

Under pressure from some Tory MPs, it was suggested two Cuadrilla sites in Lancashire may be handed over to the British Geological Survey rather than being concreted over.

But a statement from the organization said: “British Geological Survey staff have not been approached regarding the re-purposing of Cuadrilla sites and we are therefore currently not able to comment.”

Fracking has been under a “moratorium” for over two years after it caused two minor quakes in the county but the suggested move could allow the sites to be opened up at a later date.

Greenpeace UK head of energy Rosie Rogers said: “After a decade of hype and bluster, all the fracking industry has given us are two holes in a muddy field and some minor earthquakes.

“Trying to restart fracking now would only mean wasting more time when we have little. It will take many years to develop and if it ever gets produced, it will be sold to the highest bidder on the international market, with no impact on our energy bills.”

Instead, she said the Government should work on an emergency plan to “free our country from gas dependence”, adding: “This would protect households from soaring bills, tackle the climate crisis and weaken Putin’s hand.”

Lancashire county councillor Gina Dowding, who represents the Green Party, said it was “disappointing and distressing” to suggest a rethink was a solution.

“It’s just not appropriate to be even looking at this in Lancashire or anywhere in the UK, in our densely populated country,” she said.

“I’ve absolutely no doubt the community would rally again because the strength of feeling based on the scale and evidence of damage shale gas does hasn’t gone away, there’s no change in that.”

Former Cabinet minister Lord Frost, who has been campaigning for the ban to be reversed, said it was a “sensitive first step” from the Government.

Robert Jenrick, a former communities secretary, called for a “more pragmatic energy policy” that would ease soaring bills while the UK strives to hit net zero.

“I personally was always a supporter of fracking, I don’t think it’s a quick fix, but I think we should be revisiting that question,” he told BBC Newsnight.

As recently as Monday, Downing Street had denied suggestions the fracking moratorium could be lifted in response to the Ukraine crisis.

And energy minister Lord Callanan warned of “severe environmental problems” with shale gas production, adding that “Lancashire is not Texas”, being much more heavily populated.

Business Secretary Kwasi Kwarteng said the move to phase out Russian oil products by the end of the year will “ensure a smooth transition so that consumers will not be affected”.

I have pledged to establish a new taskforce to help firms find “alternative supplies”.

The Prime Minister said Britain could not “move overnight”, with the UK particularly exposed on imports of diesel from Russia.

“But we can certainly do it and we can do it in a way that doesn’t disrupt supply, that ensures we have substitute supplies on stream in an orderly way and in a timetable that won’t affect UK business, won’t affect UK manufacturing, road haulage or other parts of our industry, but will punish the regime of Vladimir Putin,” Mr Johnson told broadcasters.

US President Joe Biden ordered a ban on Russian oil imports, while the European Union was also expected to announce a phasing out.

The Business, Energy and Industrial Strategy and No 10 are yet to comment on the fracking reports.