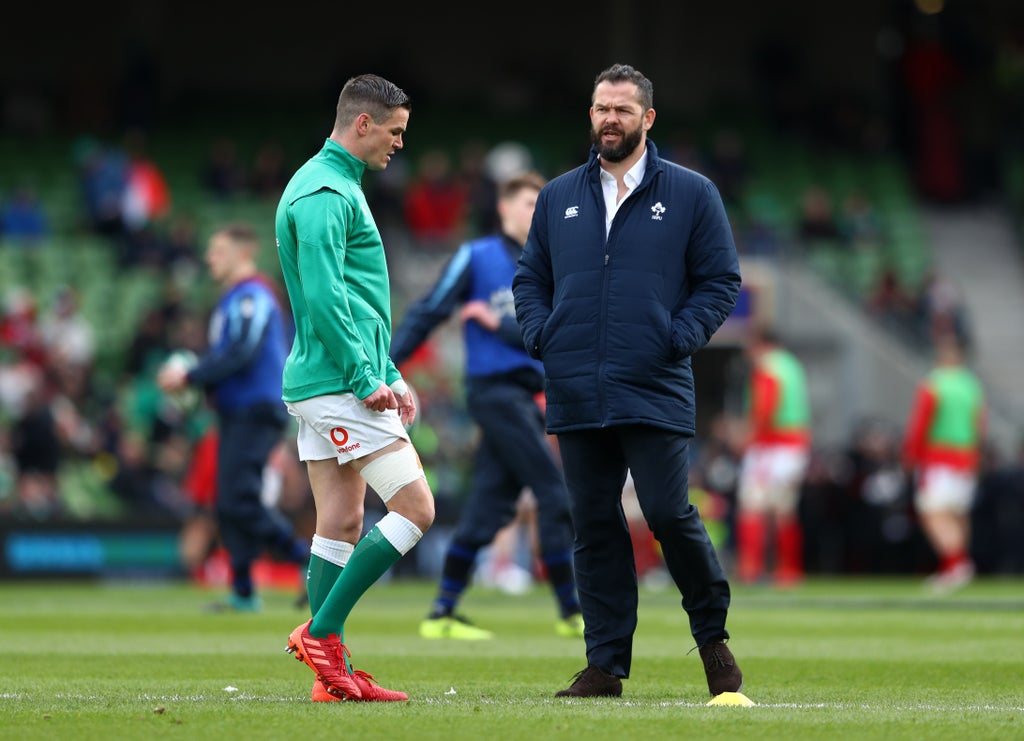 Veteran fly-half Sexton has been a key figure for his country for more than a decade and will be a major miss in Paris due to a hamstring strain suffered in training.

Munster’s Joey Carbery will deputize in the number 10 jersey to make his maiden start in the championship, with Connacht player Jack Carty providing back up from the bench and James Ryan taking on the captaincy.

While head coach Farrell admits 36-year-old Sexton remains vital to his plans, he insists the in-form Irish are far from being a one-man team.

“We’re not just one player, it never has been, it never will be, and we want to grow as a group and we make sure we approach every game in that manner anyway,” said Farrell.

“Obviously Johnny is an important member of our group.

“Being skipper of the side, he’s integral to how we push forward with many parts of our environment but at the same time this is just about the group.

“It’s a great development for us as a team going forward as well and we still expect ourselves to be at our best in Paris on Saturday.

“We’re gutted for Johnny. It means so much to him to captain his side of him and to play in games like this.

“At the same time, he realizes it’s an opportunity for us to grow as a group and that’s exciting within itself.”

Sexton has previously outlined plans to play at next year’s World Cup by which time he will be 38 and there is ongoing debate about whether Ireland are over-reliant on him.

His injury is not thought to be serious and he could be available for the round-three match against Italy on February 27.

The Leinster player, who has 102 Ireland caps, will support the team from the sidelines at Stade de France as Farrell’s men seek to build on last weekend’s bonus-point win over Wales against the pre-tournament favourites.

“It’s a small hamstring strain,” Farrell said of the injury. “We don’t envisage it being difficult at all really.

“But what we don’t want to do is to risk anything and make it worse and take him out of the competition completely. We expect him to be back pretty soon.”

Carbery impressed as understudy in the autumn after Sexton was injured in the 29-20 win over New Zealand.

The 26-year-old – who suffered a fractured elbow in December – came off the bench to kick three crucial penalties against the All Blacks, before producing a man-of-the-match performance against Argentina a week later.

Farrell talked down the pressure on Carbery and says the enforced change will not alter Ireland’s style of play as they go in search of a 10th successive win.

“It’s not just about Joey and can he handle a big game in Paris,” he said.

“It’s not just about the number 10 as far as the direction of the team is concerned, it’s about everyone who takes the field.

“We play the same game. We keep making good decisions from the pictures that are in front of us that present minute by minute. Nothing changes as far as that’s concerned.

“Joey will be a leader within himself as well. We’re expecting everyone to step up to the plate.

“The lads who are coming in are certainly ready.”

British and Irish Lions Iain Henderson and Robbie Henshaw return to the Irish bench following injuries in the only other alterations since last weekend’s straightforward success over the Welsh in Dublin.

Ulster lock Henderson has not played since sustaining an ankle problem playing for his province on December 17, while Leinster center Henshaw missed some of his country’s pre-tournament training camp in Portugal due to a groin issue.

Asked about leaving the fit-again pair out of his starting XV, Farrell replied: “The side played pretty well last week. There’s a bit of cohesion there.

“Robbie and Hendy have not had as much training time as others. They’re fit and well and had a great week back in the thick of things. They’re ready to add off the bench.”

While Ireland brushed aside Wayne Pivac’s reigning champions on the opening weekend, France overcame a slow start to defeat Italy 37-10.

This weekend’s clash is already being touted as a potential title decider and Farrell anticipates a greater standard of rugby.

“I’m expecting both sides to up it a notch or two,” he said.

“Rightly so, everyone is billing this up to be a big game.

See also  Deyna Castellanos: "They say that women's football doesn't sell, but how are we going to sell if they don't promote it" | BE SPORTS