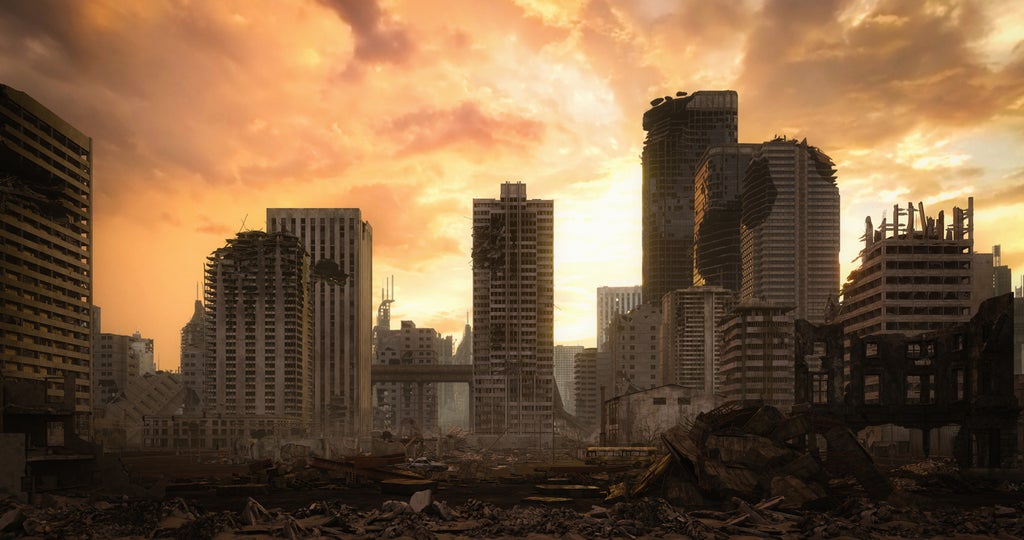 When her study – confirming a 1970s prediction that humanity’s unquenchable desire for economic growth would hit a wall and could spiral into civilization’s collapse around 2040 – first hit headlines last summer, sustainability analyst Gaya Herrington had more pressing concerns.

“It was a very interesting time when it went viral as I had a less than two-month-old infant. I’ve done interviews while breastfeeding,” she told The Independent. “In a way, it passed me by a little bit.”

It doesn’t take much of an imaginative leap to understand why this academic paper, published in the relatively obscure Journal of Industrial Ecologywould catch fire now; when dark visions of the future seem less and less far-fetched in a world experiencing months-long wildfires, back-to-back hurricanes, devastating floods and heatwaves.

Ms Herrington, former sustainability director at accounting multinational KPMG, is vice president of environmental, social, and governance research at Schneider Electric, a specialist in energy and automation, which is ranked the world’s most sustainable company.

As part of her recent Master’s degree in sustainability at Harvard University, she decided to review an iconic study from the Massachusetts Institute of Technology (MIT) in the early Seventies. Researchers, commissioned by European think tank the Club of Rome, had been set this question: At what point will humanity’s consumption of finite resources and rampant industrialization outstrip the planet’s ability to cope?

The results, published in 1972 as The Limits to Growth, they were sovereign. The team discovered that a so-called “business-as-usual” approach to economic growth would drain the planet’s resources and lead to collapse within the 21st century. While human civilization would not end, people would be significantly worse off than previous generations amid tumbling food production, industrial output, and population numbers.

But not all future scenarios in Limits to Growth (LtG) were so bleak. The MIT team also discovered that a “stabilized world” was possible, if society reconfigured priorities around the wellbeing of citizens, used resources efficiently, and cut pollution.

While the book went on to sell 30 million copies and was published in 30 languages, the initial response was mixed. Some saw a prescient warning on the dangers of endless consumption and blithe ravaging of the natural world. Others were heavily critical of the research.

Five decades on Ms Herrington’s comparative analysis, along with a number of studies in intervening years, found that LtG has largely stood the test of time.

Her thesis compared four scenarios from LtG, against the most recent empirical data available, to find out if global society was still heading towards collapse.

Overall, the new findings aligned closely with the 1970s study and concluded that civilization can expect a halt to economic growth in the next 20 years and, in the worst-case scenario, see societal collapse around 2040.

“The strongest conclusion that can be drawn from my research therefore, is that humanity is on a path to having limits to growth imposed on itself rather than consciously choosing its own. However, my research results also leave open whether the subsequent declines in industrial and agricultural output will lead to sharp declines in population and welfare levels,” Ms Herrington wrote in a blog post in July.

In one way, the results of her research were unsurprising, she says.

“The idea that growth cannot continue on a finite planet is very intuitive. Nothing grows forever,” the analyst told The Independent. However she added that it was “quite rare” for models to accurately predict decades into the future.

“It’s such a shame because if we had heard the message [back] then, we could have had a really smooth transition,” she said of the original research. “My conclusion now is that we still have time but we’re fast running out of it. We have to make drastic improvements. It’s going to be a bumpy road.”

She added: “This upcoming decade is going to determine the rest of the century. It’s quite an extraordinary time. Our generation is the first to experience climate change but we are also the last to be able to do anything about it.”

A book based on her research, titled Five Insights For Avoiding Collapse, will be published later this year. The analyst, who is an adviser to the Club of Rome, is also part of a working group which will present a 50-year update to LtG at the United Nation’s Stockholm +50 meeting in June.

A promise to “build back better” from the pandemic has been the rallying cry of leaders of major economies but in reality, this cleaner, greener future has so far failed to take shape. Carbon dioxide and methane emissions, the main drivers of the climate crisis caused by burning fossil fuels, continue to rise.

In one sense, the updated look at LtG offers a terrifying vision of the future. However the worst-case scenario is not inevitable, Ms Herrington says, even though the window is rapidly closing to chart a different course, and will require dramatic change.

For example, she says, the focus solely on net-zero emissions targets is outdated and lacks ambition, as does “thinking at the margins of taxes and pricing”.

“We need to completely re-envision what our role is in the world,” she says. “Because what is the purpose? It’s to leave the world a little bit better than you found it.

“Ultimately, I think that’s the Limits to Growth message. It can be better than this, we really can do better, and feel better. I think we have to offer an alternative of what the vision could be.”