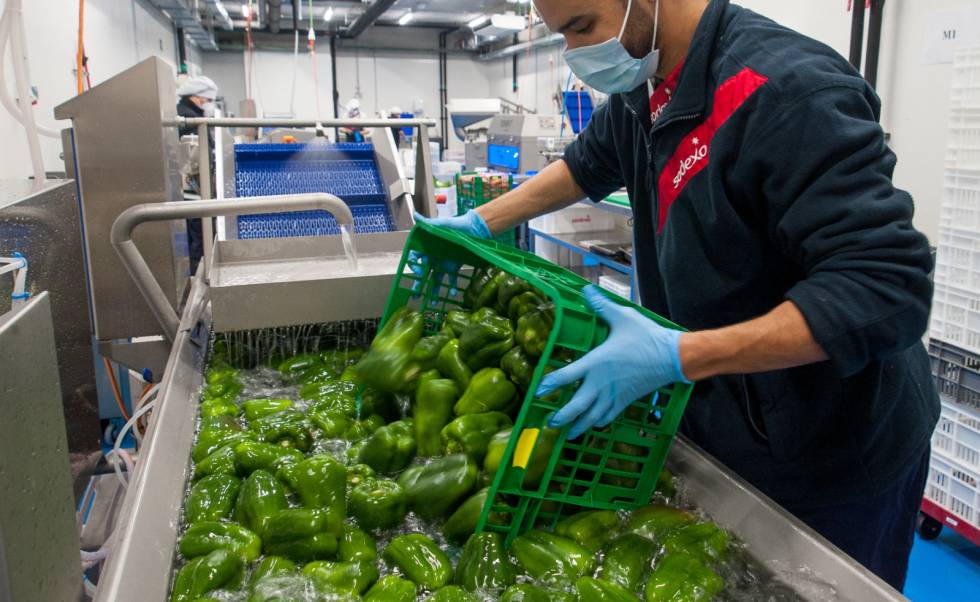 Since she became president of the bank in 2014, Ana Botín has worked hard to change the way the employees of the Financial City eat, in Boadilla del Monte, the headquarters where 8,000 employees work and were served, at least before of the pandemic and before teleworking was implemented, about 5,700 meals daily. The president has been involved, she did it jointly with Sodexo, in the application of sustainable practices in the company canteen, including a program plastic-free, with which more than a million plastic bottles a year have been eliminated within the entire financial complex, which have been replaced by fresh water sources.

One of the latest innovations, which is part of the bank’s BeHealthy program –with four pillars, know yourself, move, feed yourself and balance yourself– has been to install a fruit and vegetable processing center in the financial city, the only plant, according to what they say in the financial institution, in Spain in a company restaurant.
The model involves a structural change in work protocols, for which several cutting-edge centers and facilities in Germany were visited two years ago, given that in Spain this type of initiative for communities did not exist.

Since then, a series of actions have been carried out in kitchens and in the configuration of restaurants, which are reflected in a restructuring both in the composition of menus and in operations for the chefs themselves, purchasing management, receipt of merchandise , storage of food and its subsequent processing until it reaches the table of the employees. And it is at the end of 2021 when the new fruit and vegetable processing center is launched, which covers the restaurant service for all the restaurants in the Santander corporate center, and all the machinery and infrastructure necessary to be able to Obtain the raw material directly from the producers.

See also  The lefts slow down their articulation | Spain

The installation, whose works lasted two months, has involved the adaptation of an old warehouse, as well as waterproofing, air conditioning and ventilation, in addition to the purchase and installation of extensive cutting-edge industrialized equipment.

Fresh fruits and vegetables are received daily, directly from where they have been harvested and collected, minimizing the logistical implication of transport, arrival at the factory, packaging and packaging. Once there, the machines peel, wash and chop the food, which are later transferred to the kitchens of restaurants, where they are prepared or directly displayed in the salad and fruit buffets.

The implementation of this center allows, according to the bank, to favor the consumption of seasonal fruits and vegetables no additives or preservatives, in addition to supporting the local economy and revitalizing the primary sector.

At the moment, they are prioritizing the purchase of raw materials from producers throughout Spain, but the objective is to gradually reduce the perimeter so as not to exceed a maximum radius of 200 kilometers in all those available products.

Also I know reduces environmental impact in terms of pollution, emission of greenhouse gases and generation of plastic waste. With the aim of ending the food cycle, the entity that presides over Botín is studying the best way to dispose of and reuse food skins and shells.

It is also intended to go a step further in analyzing the environmental impact of the products that are consumed in order to continue contributing to more sustainable nutrition. Currently, at the Santander headquarters, between 800 and 1,000 kilos of fruit and vegetables are managed daily, supplying the dining rooms of the financial city, Alhambra and Montepríncipe.

The objective, besides being pioneers in the installation of a food processing plant of this type, is to delve into measures that try to guarantee a healthy diet, such as the use of virgin olive oil, the increase of vegetables, cereals and legumes in the preparations.