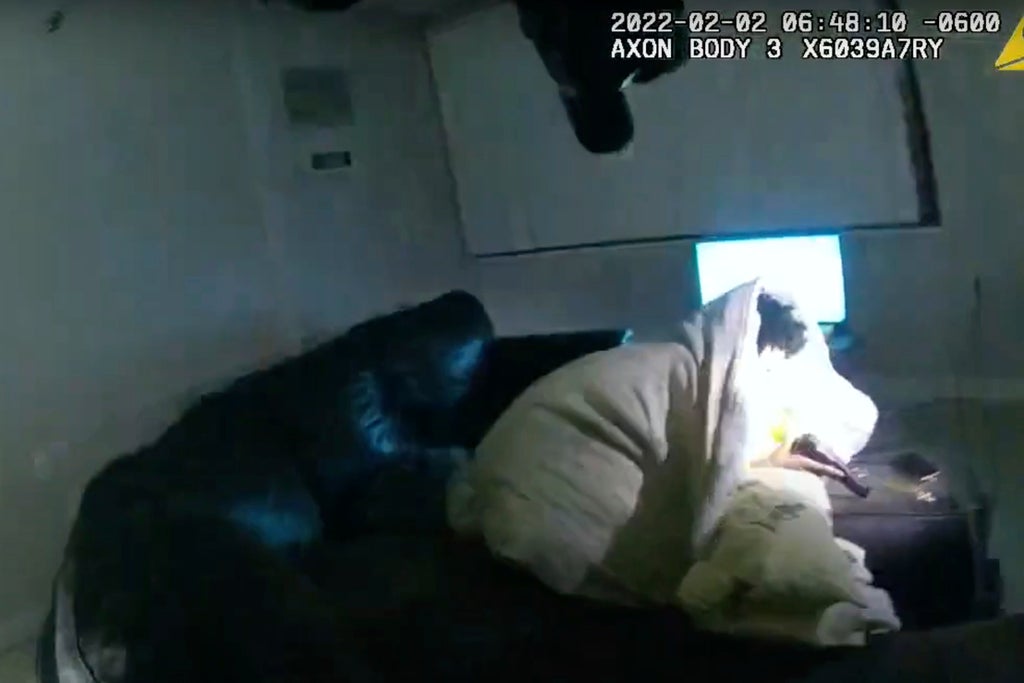 Disturbing body camera footage that showed the killing of a Black man by Minneapolis police was released by the department on Thursday.

In the 54-second video footage, Locke can be seen wrapped in a blanket on a couch when SWAT officers entered the apartment on Wednesday at around 7am.

Police officials can be seen in the video entering the apartment using a key and without knocking.

Shouts of “Police! Face forward!” can be heard after which Locke stirs under his blanket and moves from the couch to the floor.

He can be seen carrying a hand gun.

Three shots are then heard and the video ends.

Authorities said Locke was not named in the search warrant which was for a homicide investigation.

Interim chief Amelia Huffman said it was not clear whether Locke was connected to the homicide investigation which is under the control of the St Paul police department, reported the Associated Press (AP).

Locke’s family reviewed the footage before it was released and have demanded justice for their son.

The family reportedly told Nekima Levy Armstrong, a civil rights attorney, that their son was a licensed gun owner with a concealed carry permit and that he wasn’t named as one of the three suspects in the warrant.

Prominent civil rights attorney Ben Crump, who is representing the family, said in a statement: “Like the case of Breonna Taylor, the tragic killing of Amir Locke shows a pattern of no-knock warrants having deadly consequences for Black Americans.”

The shooting has raised questions about the police’s conduct.

Minneapolis Major Jacob Frey said the video “raises about as many questions as it does answers”.

He added that the city was pursuing answers “as quickly as possible and in transparent fashion”.

“An officer fired his duty weapon and the adult male suspect was struck. Officers immediately provided emergency aid and carried the suspect down to the lobby to meet paramedics,” said a police report from the incident, reported the Daily Beast.

“The suspect was transported to Hennepin County Medical Center where he died.”

Authorities on Thursday identified Mark Hanneman as the officer who shot the young Black man.

The officer who hit Locke three times, twice on his chest and once on his wrist, has been placed on administrative leave.

Authorities also released a still photograph from the video that showed Locke holding the gun, his trigger finger laid aside from the barrel while the outline of his head is barely visible.

Activists including Ms Levy Armstrong confronted the police at the press conference on Thursday calling the video footage release “the anatomy of a coverup.”

“The still shot shows the image of the firearm in the subject’s hands, at the best possible moment when the lighting was fully on him,” she told AP.

“That’s the moment when the officer had to make a split-second decision to assess the circumstances and to determine whether he felt like there was an articulable threat, that the threat was of imminent harm, great bodily harm or death, and that he needed to take action right then to protect himself and his partners.”

See also  'There were adults who saw what was happening, but nothing was done' - victim of music teacher Peter Antonelli

The body camera footage was released after pressure from activists and political leaders including Representative Ilhan Omar and multiple Minneapolis city council members.