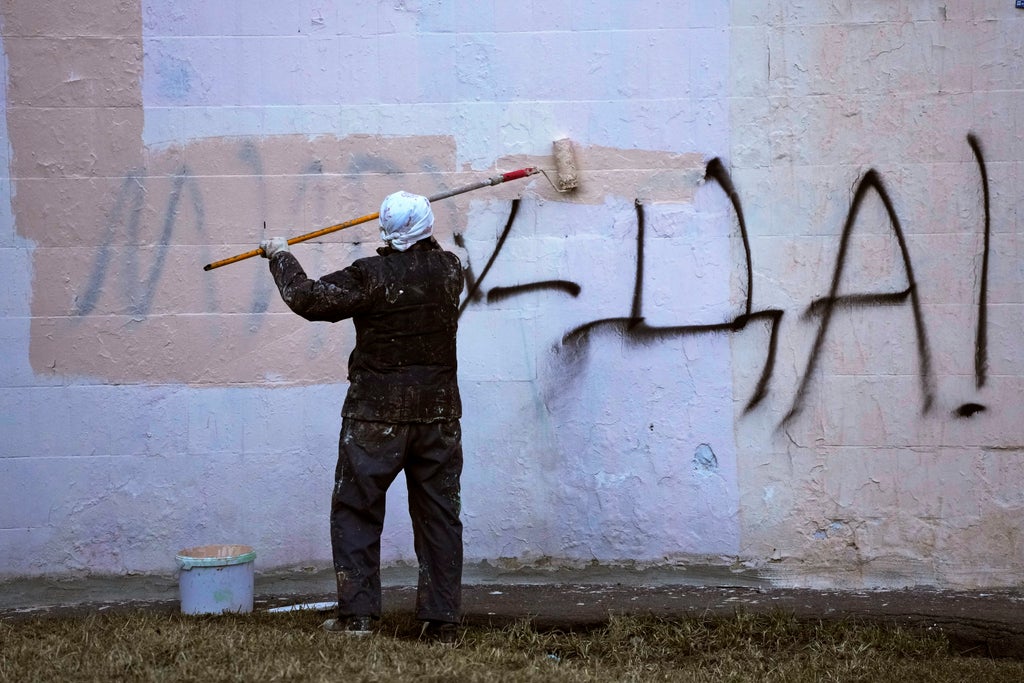 When Alexei Navalny was arrested in January 2021, tens of thousands of Russians filled the streets in protest, demanding that the top Kremlin critic be released and chanting slogans against President Vladimir Putin. Thousands were arrested.

In the months since then, Navalny was given 2½ years in prison. His organization of him, close associates and other opposition activists were either prosecuted, fled the country or had their hands tied by draconian new laws or decrees. Independent news outlets were blocked and social media platforms banned.

Even a silent antiwar protester who held up a blank sign earlier this month in the city of Nizhny Novgorod was arrested.

Putin’s crackdown — unprecedented in post-Soviet Russia — has blanketed the country. By the time Navalny’s sentence was extended for another nine years by a court on Tuesday, not much dissent could be mustered. The Kremlin had worked hard to see that.

And yet, there are still flickers of protest and defiance.

“Of course, nine years is a stiff sentence,” said Navalny ally Ilya Yashin, who has vowed to remain in Russia. “Rapists, thieves and murderers in Russia often get less. … But in reality (the sentence) doesn’t mean anything, because everyone understands: Alexei will spend as much time behind bars as Putin will sit in the Kremlin.”

After a trial in a makeshift courtroom at the penal colony where he is being held, Navalny was convicted on fraud and contemplated court charges in a move that was seen as an attempt to keep Putin’s biggest foe behind bars for as long as possible.

The 45-year-old corruption fighter, who in 2020 survived a poisoning with a nerve agent that he blames on the Kremlin, said on Facebook in a sardonic comment that was posted by his team: “My space flight is taking a bit longer than expected.”

His trial, which began a week before Russian troops rolled into Ukraine on Feb. 24, even prompted a small act of defiance by one of the witnesses for the prosecution. Fyodor Gorozhanko, a former activist in Navalny’s Anti-Corruption Foundation, who has since left Russia, testified that he had been coerced to give evidence against the opposition leader.

Navalny’s foundation and a nationwide network of regional offices were outlawed last year as extremist and ceased operating. The Kremlin also turned up the heat on other opposition activists and groups, as well as on independent media and human rights organizations.

Dozens have been slapped with a crippling “foreign agent” label, which implies additional government scrutiny and scorn. Many have been forced to shut down under pressure.

With the invasion of Ukraine, the crackdown has been expanded — all but silencing most independent news sites. Facebook and Instagram were banned as extremist and were blocked in Russia. Twitter was also blocked, although Russians who use virtual private networks, or VPNs, are able to avoid access restrictions to the social media networks and news outlets banned in Russia.

A sweeping clampdown on antiwar protests was instituted, but that didn’t stop them. More than 15,000 people were detained for demonstrating against the war, according to the OVD-Info rights group that tracks political arrests.

On March 14, a live evening news program on Russia’s state TV was interrupted by a woman who walked behind the anchor holding a handmade poster protesting the war in English and Russian. OVD-Info identified her as Marina Ovsyannikova, an employee of the station, who was taken into custody and fined.

A new law was rubber-stamped by the parliament, criminalizing content that deviates from the official line as “fake news” or which discredits the Russian military and its actions in Ukraine. Media outlets have faced pressure over calling the action a “war” or an “invasion,” rather than using the government’s description of it as a “special military operation.” The first criminal cases under the new law appeared shortly after it was adopted and, among others, implied two prominent public figures who condemned the offensive on social media.

Navalny’s team has been undeterred by both the war and the trial of its leader, announcing it was rebooting the foundation as an international organization.

“Corruption kills,” read its new website. “As Ukrainian cities are bombed by Putin, this has never been more obvious. Putin and his circle of him have done everything to stay in power — and steal, and steal, and steal some more. High on their own impunity, they unleashed a war.”

“We will find all of their mansions in Monaco and their villas in Miami, and when we do, we will make sure Putin’s elite loses everything it owns,” the statement said. “We have been fighting Putin since 2011. We will fight him until we win.”

See also  "Do not sell the motorcycle": David explains on Twitter how video games help children and goes viral | Society

The Navalny team also promoted a new YouTube channel it has launched, Popular Politics, that since March 5 has attracted more than 920,000 subscribers.

On Monday, it released a video on YouTube alleging that Putin owns a $700 million super yacht, which is in an Italian port. The new expose has gotten over 2.8 million views by Tuesday evening. The New York Times reported earlier this month that the vessel’s captain denied Putin owned or had ever been on the yacht.

The allegations came in stark contrast to Putin’s recent ominous remarks condemning those who oppose the war in Ukraine and juxtaposing elites “who have villas in Miami or the French Riviera, those who can’t live without foie gras, oysters” to “our people” and “Russia.”

Mikhail Khodorkovsky, an exiled Russian oil tycoon who spent a decade in prison in Russia on charges widely seen as revenge for challenging Putin’s rule, spoke Tuesday of his optimism for Navalny.

“Nine years were handed to Navalny. However, what does it matter? What matters is how much time Putin has left. And here I think there is some good news for Alexei,” Khodorkovsky tweeted.