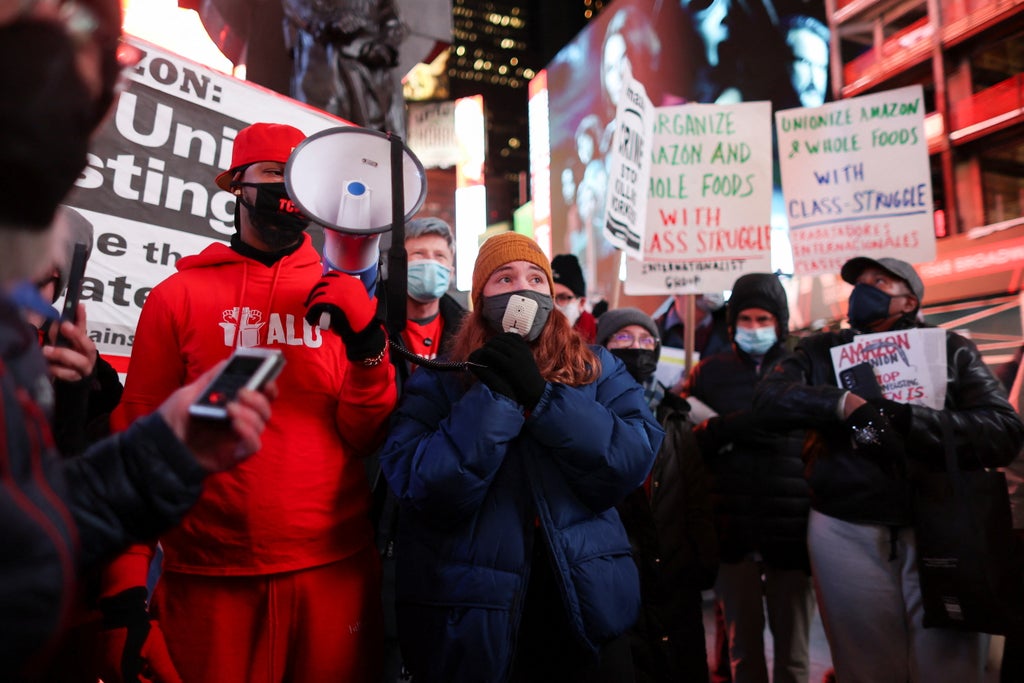 Warehouse workers at the company’s Staten Island facility have collected enough signatures to hold a union election, kicking off another historic campaign at the nation’s second-largest private employer, with results that could resonate throughout the company’s workforce. nation.

The National Labor Relations Board found a “sufficient display of interest” among New York workers to organize an election. The ruling comes just days before ballots are to be sent to workers in Bessemer, Alabama, for another election after officials determined the company’s union-busting efforts “hijacked” the campaign.

An election petition by the Amazon Labor Union, the labor group that organizes New York City workers at the JFK8 warehouse, was rejected last year after failing to collect enough signatures.

Organizer Christian Smalls, who was fired after organizing a walkout to protest pandemic working conditions, said the group has collected more than 2,500 signatures this year.

Union organizers have called for higher and more competitive wages, increases in time off and stronger workplace protections against covid-19 and other hazards, among other demands.

A hearing to determine the dates and rules of the election is scheduled for February 16.

After a failed attempt to unionize some 6,000 workers in Alabama last year, Amazon workers at the Bessemer plant will get another chance next week.

Ballots for that election will be delivered on February 4 and are due March 25. The vote count is scheduled for March 28.

In November, a labor board official determined that Amazon showed “blatant disregard” for the mail-in ballot election, arguing that the company “essentially hijacked the process and gave a strong impression that it controlled the process.”

Union organizers vowed to challenge the closely watched election results, alleging that the company mounted an aggressive and illegal anti-union campaign that had attracted international scrutiny.

The workers gained the support of President Joe Biden and progressive members of Congress, as well as Senator Bernie Sanders, who held rallies with the workers.

Warehouse management coordinated with the US Postal Service and Amazon headquarters to set up a drop box in front of the warehouse under a company-provided tarp, which union organizers say was used to intimidate workers.

The labor board’s notice of a second election accused Amazon of interfering with “employees’ exercise of free and reasoned choice by creating the appearance of election irregularity.” He also accused Amazon of “improperly canvassing for employee support during mandatory meetings.”

In a statement, spokeswoman Kelly Nantel said Amazon is “skeptical that there are a sufficient number of legitimate signatures” for the Staten Island election, “and we are trying to understand how these signatures were verified.”

“Our employees have always had the option to join a union, and as we saw a few months ago, the vast majority of our team on Staten Island did not support [the union]”, he said in a statement to the independent .

Smalls said the votes have been verified by the labor board against payroll.

See also  Fist bumps, Putin and going topless: What we did – and didn't – learn from the G7