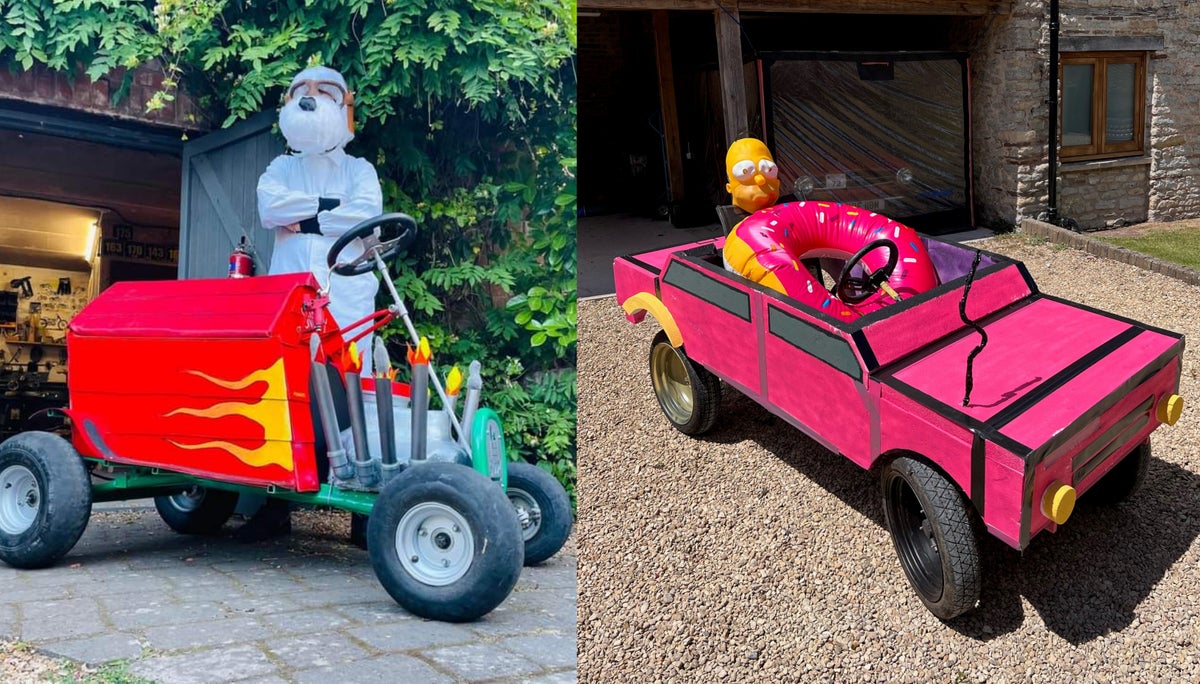 Thousands of spectators are expected to descend on Alexandra Palace in London to witness the annual Red Bull Soapbox race.

Around 70 teams of amateur drivers and crews have been tasked with creating their own homemade non-motorized soapboxes that will race on the downhill course on Sunday.

Each soapbox vehicle is unique and many of the crews have been inspired by their favorite TV shows and fictional characters from films including Star Wars, Harry Potter and Ghostbusters.

One team called The Handsome Homers have included a large donut on their bright pink soapbox, called the Pink Lightening, inspired by The Simpsons.

Team captain Jack Brown, 23, told the PA news agency: “We’ve all grown up watching The Simpsons, our costumes are going to be the highlight.

“We’ve found it harder this year than any other year but we’ve found time in the evenings after work to keep chipping away at it.

“I think this year we’ve built something that’s much more sensitive than previous years and could potentially get us a win.

“We can’t wait to be back, this is our third year doing the Red Bull Soapbox Race and we’re looking forward to landing ourselves with another huge crash.”

Another team called Team Peanuts have been inspired by the fictional dog Snoopy after being given the idea by the team captain Tim Hartshorne’s 12-year-old son.

Team Peanuts’ soapbox will feature Snoopy’s famous red dog house, with added flames on the side, and the driver will sit on the roof, “just like Snoopy”.

Each team consists of four people – which includes one driver, one co-driver and four pit crew.

However, building a homemade vehicle without a motor but with a working steering wheel and brakes has come to be a challenge.

Melanie Heyworth of the Rookie Duckies said building her team’s soapbox, called Quack-In-A-Box, has given her “many sleepless nights”.

Ms Heyworth told PA: “Mainly, and I speak for all the Rookies when I say this, we are feeling relief it’s finally getting to race day.

“We all had many sleepless nights, then one good idea pops up in theory but doesn’t translate to a good idea in practice, then it’s back to the drawing board again.

“The brakes for instance, gave us a few nightmares.

“Most of all we are looking forward to how the old girl performs on the track, and that we’ll finally get to see all the other cool designs in the pits and the clever-clogs behind them.”

Meanwhile, one team called A Brick Too Far, who are representing Cambridge and the surrounding areas, have had a more unusual approach to training for the big event.

Team captain Sam Waite, 28, told PA: “Our preparation has mainly been drinking beers and watching the best crashes we find on YouTube, after all if we’re going out, we’re doing it properly.

“I think overall the team is pretty excited, but the nerves are definitely starting to hit myself and Nirav, our driver.

“On the day we can’t wait to see all the other entries and absolutely smash the course…figuratively or literally waits to be seen.”

The event at Alexandra Palace is only for ticket holders but the race will be aired on the TV channel Dave in the following weeks.

See also  "A child is not born in three years"