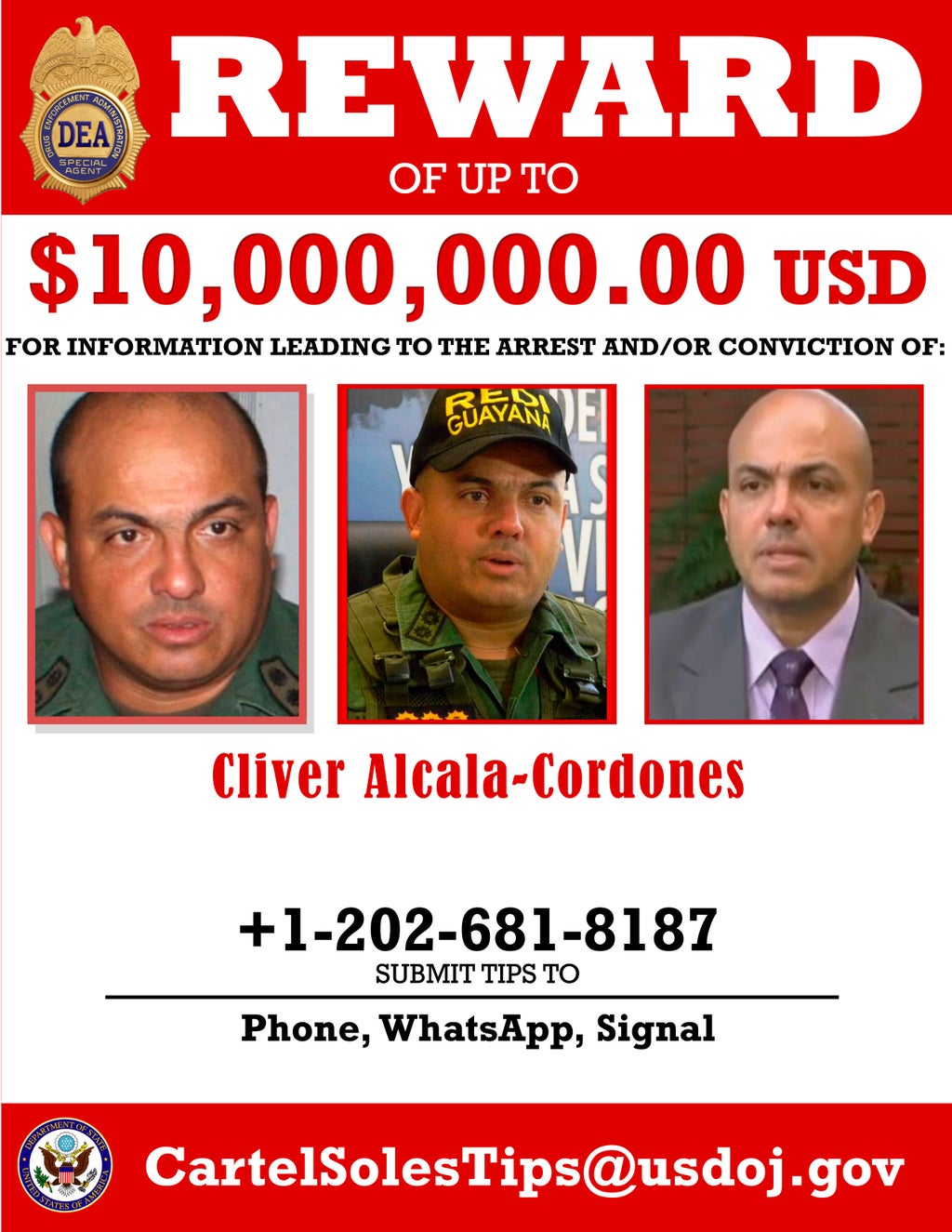 A retired Venezuelan army general says US officials at the highest levels of the CIA and other federal agencies were aware of his efforts to oust Nicolás Maduro — a role he says should immediately debunk criminal charges that he worked alongside the socialist leader to flood the US with cocaine.

The stunning accusation came in a court filing late Friday by attorneys for Cliver Alcalá seeking to have thrown out narcoterrorist charges filed nearly two years ago by federal prosecutors in Manhattan.

“Efforts to overthrow the Maduro regime have been well known to the United States government,” Alcalá’s attorneys said in a November 2021 letter to prosecutors’ efforts that accompanied their motion to have the charges dismissed.. “His opposition to the regime and his alleged to overthrow it were reported to the highest levels of the Central Intelligence Agency, National Security Council, and the Department of the Treasury.”

The court records raise fresh questions about what the Trump administration knew about the failed plot to oust Maduro involving Jordan Goudreau, an idealistic if battle-scarred former US Green Beret, and a ragtag army of Venezuelan military deserters he was helping Alcalá train at secret camps in Colombia around the time of his arrest.

Alcalá has been an outspoken critic of Maduro almost since he took office in 2013 following the death of Hugo Chávez.

But despite such open hostility toward Maduro, he and his sworn enemy were charged together in a second superseding indictment with being part of a cabal of senior Venezuelan officials and military officers who worked with Colombian rebels to allegedly send 250 metric tons of cocaine a year to theUS.

While the attorneys provided no details about what US government may have known about Alcalá’s coup plotting, they said they believe his activities “were communicated at the highest levels of a number of US government agencies” including the CIA, Treasury and Justice departments, the NSC and the Drug Enforcement Administration.

To that end they are seeking documents and information, much of it classified, regarding communications between US officials and members of Venezuela’s opposition regarding Alcalá. Those US officials include former Secretary of State Mike Pompeo former Attorney General William Barr as well as senior officials at the White House and unnamed CIA operatives in Colombia.

The CIA didn’t immediately respond to a request for comment sent Friday night.

Also named as having knowledge of Alcalá’s activities are two allies of opposition leader Juan Guaidó — who the US recognizes as Venezuela’s legitimate leader — as well as Miami-based political strategist JJ Rendon, who signed on behalf of Guaidó a never-executed agreement for Goudreau to carry out a snatch and grab operation against Maduro.

“The evidence is clear that he has been openly and actively opposed to his alleged co-conspirators for at least the past eight years,” attorneys wrote in the letter to prosecutors included in Friday’s filing. “Indeed, his conduct, in support of the democratic ideals in which he believes, constituted treason against the very people whom the government alleges were his co-conspirators for which they seek his detention, imprisonment, and life.”

In the telling of Alcalá’s attorneys, on the eve of launching what would’ve been his second armed raid against Maduro, the former army major general received a knock on the door from a US law enforcement official at his home in Barranquilla, Colombia informing him that he had been indicted.

“The agent informed (him) that he could either board a private jet bound for New York or be held in a Colombian jail where he would no doubt be targeted by the Venezuelan intelligence services for assassination,” Alcala’s attorneys claim. “Left with little choice, (he) agreed to accompany the agent back to the United States.”

Although Alcalá was out of the picture in a Manhattan jail, a small group of would-be freedom fighters pushed ahead and on May 3, 2020 — two days after an investigation by The Associated Press blew the lid on the clandestine camps — launched a crossborder raid that was easily mopped up.

Operation Gideon — or the Bay of Piglets, as the bloody fiasco came to be known — ended with six insurgents dead and two of Goudreau’s former Special Forces buddies behind bars in Caracas. It also delivered a major propaganda coup to Maduro, who has long accused the US of seeking to assassinate him.

The US has always denied any involvement in violent attempts to overthrow Maduro. However, Pompeo’s cryptic statement that the US had no “direct involvement” in Operation Gedeon left some observers wondering what the US may have known about the plot in a region where the CIA has a long history of coup-plotting during the Cold War.

Evidence that the US was aware of Alcalá’s clandestine activities could bolster his defense at trial that even if he had been a member of a drug smuggling ring — which he denies — he took steps to withdraw from the criminal conspiracy years before being charged.

Alcalá’s attorneys also argue that despite having pored over thousands of documents, video and audio recordings turned over by prosecutors, they could find no evidence demonstrating Alcalá was involved in the alleged narcotics conspiracy.

The only act tying Alcalá to the conspiracy in the 28-page indictment is a 2008 meeting he allegedly attended with Chávez’s former spy boss Hugo Carvajal and socialist party boss Diosdado Cabello in which it was agreed Alcalá would take on unspecified “additional duties” to coordinate drug trafficking.

Alcalá has been living in Colombia since fleeing Venezuela in 2018 after the discovery of a conspiracy that he was secretly leading in hopes of ousting Maduro. The US offered a $10 million reward for his arrest when Barr at a press conference announced he, Maduro and several other senior Venezuelan officials had been indicted.

Alcala’s attorneys also contend that around 2018, Assistant US Attorney Michael Lockard indicated in various discussions that his office had decided not to charge Alcala with narcotics-related crimes because the evidence against him was “equivocal.”

They also produced a copy of a 2014 email by one of Alcala’s attorneys, Adam Kaufmann, to the then-assigned prosecutor recounting a conversation he had with DEA ​​agents who purportedly told him the government had located a witness with information that had led them to drop their investigation.

Alcala’s defense says it didn’t receive any materials substantiating the government’s apparent misgivings. Under what’s known as Brady rules, prosecutors are required to hand over to defendants evidence that may help them prove their innocence.

Before surrendering in 2020, Alcalá shocked many by claiming responsibility for a stockpile of US-made assault weapons and military equipment seized on a highway in Colombia for what he said was a planned incursion into Venezuela to remove Maduro. Without offering much in the way of details, he said he had a contract with Guaidó and his “American advisers” to purchase the weapons but blamed the US backed opposition for betraying the cause.

“We had everything ready,” Alcalá said in a video published on social media moments before turning himself in. “But circumstances that have plagued us throughout this fight against the regime generated leaks from the very heart of the opposition, the part that wants to coexist with Maduro.”