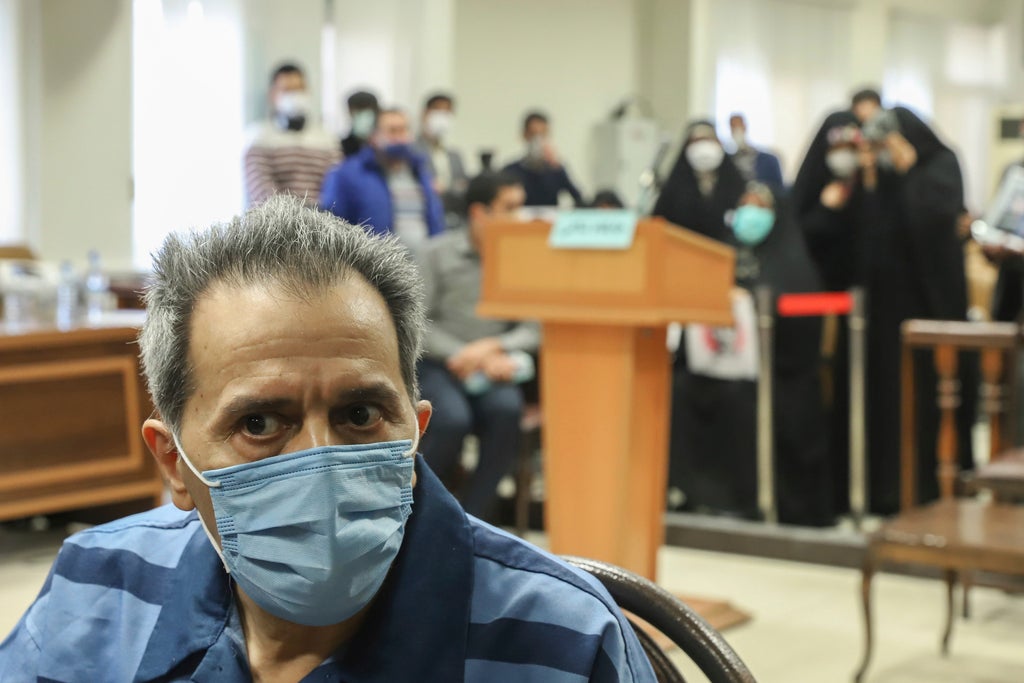 The alleged leader of the militant wing of a US-based Iranian opposition group went on trial Sunday, state TV reported. He’s accused of planning a 2008 bombing at a mosque that killed 14 people and wounded over 200.

In 2020, Iran’s intelligence service detained Jamshid Sharmahd, an Iranian-German national and US resident. Iran said he is the leader of Tondar, the militant wing of the opposition group Kingdom Assembly of Iran.

Sharmahd’s family says he is only the spokesperson for the Kingdom Assembly of Iran, known in Farsi as Anjoman-e Padeshahi-e Iran, and has accused Iran of kidnapping him in Dubai His hometown is Glendora, California.

Sharmahd confessed to having a relationship with both the FBI and the CIA, alleged state TV. A state TV reporter claimed he was in contact with nine FBI and CIA agents and his last meeting with him was in January 2020, without elaborating.

Iranian state television has long been believed to be overseen by intelligence agencies in the country and its channels routinely broadcast coerced confessions.

Sharmahd’s family has accused Iran of keeping their father in “555 days of solitary confinement without charges” prior to the hearing.

At the time of his arrest, Iran alleged Sharmahd was behind the 2008 bombing that targeted the Hosseynieh Seyed al-Shohada Mosque in the city of Shiraz and that he was planning other attacks around Iran. Besides the 14 killed in the bombing, 215 were wounded.

Sharmahd, who supports restoring Iran’s monarchy that was overthrown in the 1979 Islamic Revolution, had been previously targeted in an apparent Iranian assassination plot on US soil in 2009.

Iran hasn’t said how it detained Sharmahd, which came against the backdrop of covert actions conducted by Iran amid heightened tensions with the US over Tehran’s collapsing nuclear deal with world powers.

Sharmahd had been in Dubai, trying to travel to India for a business deal involving his software company, his son said. He was hoping to get a connecting flight despite the ongoing coronavirus pandemic disrupting global travel.

Western officials believe Iran runs intelligence operations in Dubai and keeps tabs on the hundreds of thousands of Iranians living in the city-state. Iran is suspected of kidnapping and later killing British-Iranian national Abbas Yazdi in Dubai in 2013, though Tehran has denied involvement.

The US State Department runs its Iran Regional Presence Office in Dubai, where diplomats monitor Iranian media reports and talk to Iranians.

Dubai’s hotels have long been targeted by intelligence operatives, such as in the suspected 2010 assassination by the Israeli Mossad of Hamas operative Mahmoud al-Mabhouh. Dubai and the rest of the UAE have since invested even more in an elaborate surveillance network.

The Kingdom Assembly of Iran seeks to restore Iran’s monarchy, which ended when the fatally ill Shah Mohammad Reza Pahlavi fled the country in 1979 just before the Islamic Revolution. The group’s founder disappeared in the mid-2000s.

Last week, Iran said its intelligence units arrested the No. 2 leader of Tondar, or “Thunder” in Farsi, identified only as “Masmatus.”

Iran has also accused the group of being behind a 2010 bombing at Ayatollah Ruhollah Khomeini’s mausoleum in Tehran that wounded several people.

State TV said some family members of victims of the mosque bombing attended Sunday’s hearing, which was presided over by Judge Abolghasem Salavati in Revolutionary Court 15 in the capital, Tehran.