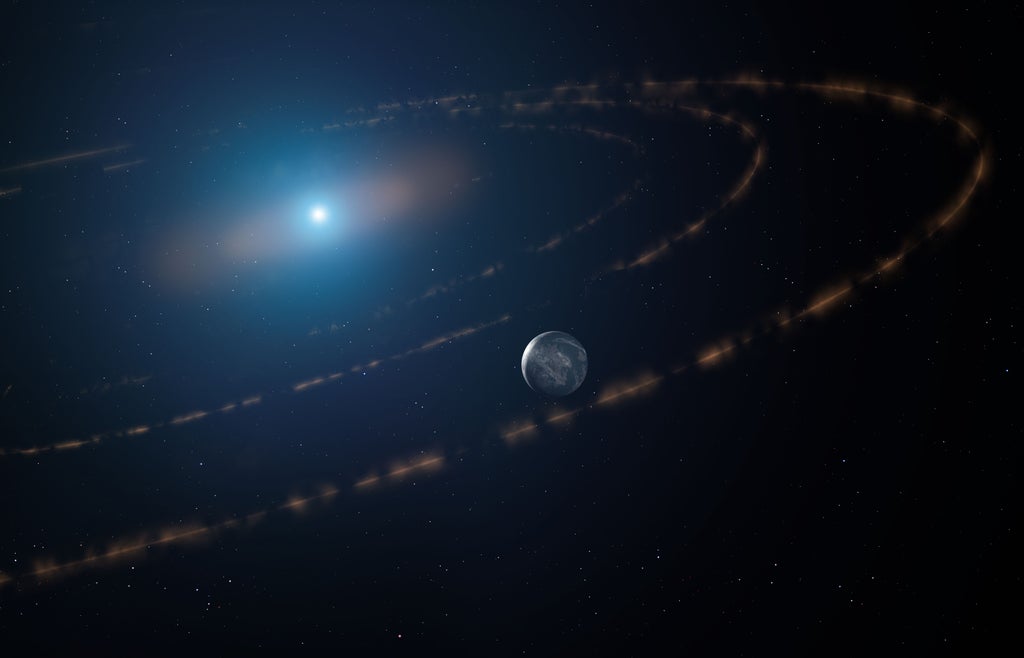 Alien life could be found on a planet orbiting a dead star, scientists have said.

It is the first time that researchers have seen planetary bodies orbiting in the “habitable zone” around a dead star. Scientists are particularly excited about worlds found in that so called “Goldilocks” zone, which are neither too close or far away from their star and so water and life could potentially flourish.

The researchers spotted a ring of debris which included structures the size of our moon, orbiting close to a white dwarf star, and could include a planet in that all-important zone.

White dwarfs are the eventual fate of almost all stars. When they have finished their fuel, they burn out, leaving an incredibly dense but small corpse behind.

As such, all planetary systems including our own are likely to experience such an end. And the newly discovered star and its possible planets could offer a glimpse at what that might look like.

In the new study, UCL researchers measured light from a white dwarf in the Milky Way known as WD1054–226, using data from ground and space-based telescopes.

They were surprised to find marked dips in light corresponding to 65 evenly spaced clouds of planetary debris orbiting the star every 25 hours.

The researchers concluded the dimming of the star’s light every 23 minutes suggested the structures were kept in such a precise arrangement by a nearby planet.

But the researchers cautioned that more information was needed in order to confirm the presence of a planet.

Lead author Professor Jay Farihi, UCL Physics & Astronomy said: “This is the first time astronomers have detected any kind of planetary body in the habitable zone of a white dwarf.

“The moon-sized structures we have observed are irregular and dusty (eg comet-like) rather than solid, spherical bodies.

“Their absolute regularity, one passing in front of the star every 23 minutes, is a mystery we cannot currently explain.

“An exciting possibility is that these bodies are kept in such an evenly spaced orbital pattern because of the gravitational influence of a nearby planet.

“Without this influence, friction and collisions would cause the structures to disperse, losing the precise regularity that is observed.

“A precedent for this ‘shepherding’ is the way the gravitational pull of moons around Neptune and Saturn help to create stable ring structures orbiting these planets.

“The possibility of a planet in the habitable zone is exciting and also unexpected, we were not looking for this.

“However, it is important to keep in mind that more evidence is necessary to confirm the presence of a planet.

“We cannot observe the planet directly so confirmation may come by comparing computer models with further observations of the star and orbiting debris.”

It is thought that any planet orbiting the white dwarf – which is 117 light years away – that can potentially host water and therefore life would be a recent development.

According to the scientists, the area would be habitable for at least two billion years, including at least one billion years into the future.

Professor Farihi added: “Since our Sun will become a white dwarf in a few billion years, our study provides a glimpse into the future of our own solar system.”

The study, published in Monthly Notices Of The Royal Astronomical Societyreceived funding from the UK’s Science and Technology Facilities Council (STFC).