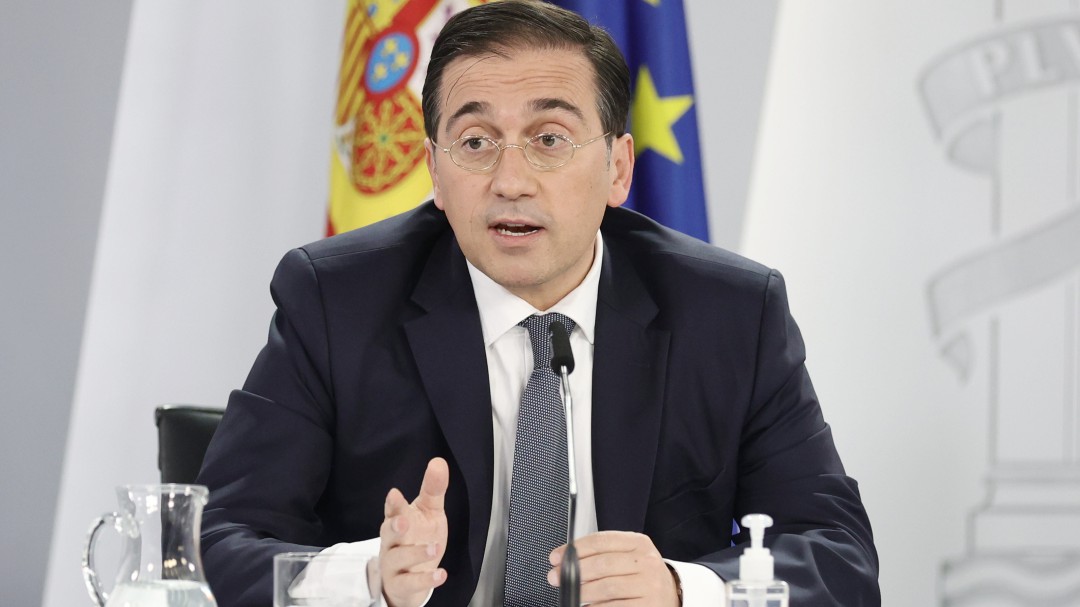 The Minister of Foreign Affairs, EU and Cooperation, José Manuel Albares, made it clear on Tuesday that the Government continues to opt for dialogue to resolve the current crisis with Russia over Ukraine, although he has insisted that there are certain ” red lines” that cannot be accepted and one of them is negotiating “under threat”.

Albares has appeared urgently in the Foreign Affairs Committee of the Congress of Deputies to present the Government’s position regarding the crisis and to demand the “unity” of all parliamentary groups, just as there is already within the EU and in NATO. That position, he pointed out, is governed “by four ‘d’s: diplomacy, de-escalation, relaxation and deterrence.”

In the minister’s opinion, the deployment of more than 100,000 Russian soldiers on the border with Ukraine “is not justified for defensive reasons” while the security demands made by Russia seek nothing more than “to isolate Ukraine from the West and block the enlargement of NATO” as well as trying to recapture the former Soviet sphere of influence.

“All this is unacceptable, violates international law and is a threat to peace,” stressed the minister, for whom the fact that dialogue with Russia continues in different forums is still “good news in itself” . In addition, he has taken the opportunity to reiterate the call for dialogue with Moscow in favor of achieving peace, the ultimate objective.

But the fact that Spain, like the EU and NATO, and also the United States, have opted for dialogue to resolve any concern that Russia may have regarding the European security architecture does not mean that there are no “red lines” to the same, has highlighted the head of Spanish diplomacy.

See also  Moving House With a Dog: Here are 6 expert tips on helping your adorable dog settle into a new home

The first of these, he stated, is that Ukraine is a sovereign country and as such has the right to freely decide whether to join certain international organizations. In addition, he added, “Russia cannot expect us to accept the limitation of the sovereignty of the states of Central and Eastern Europe.” “The international order based on spheres of influence is a thing of the past,” he stressed.

Thirdly, he added in his statement, “do not negotiate under threat.” In the current context, the presence of Russian troops on the border is “difficult to interpret” as anything other than “a means of pressure on Ukraine.”

Both the EU and NATO want “this situation to be normalized through dialogue” and in no case, he asserted, “do we want to contribute to military escalation or give excuses to others to increase their aggressiveness.” Thus, if the military escalation occurs “it would be the result of a decision that neither the European states nor the allies will make”, who face a situation that they have not sought.

In this sense, he has warned Moscow that, if necessary, it will face “massive economic consequences and high costs”, with sanctions by the EU coordinated with its partners abroad.

Although he did not want to go into specific details about the sanctions, he did assure the deputies that it will be “a massive, forceful and very credible package”. In addition, he has recognized that given the consequences that Russia’s “retaliation measures” may have, “compensatory measures by the European Commission may be necessary.”

On the other hand, after assuring that the Government aspires to have “the best relations” with Russia and that there are many areas in which it can cooperate, it has made it clear that Spain “will always act firmly in defense of international legality, the sovereignty and territorial integrity of states and in support and close coordination with its European partners and allies”.

“Spain always comes when it is needed”

“The Government is coordinated and prepared for any eventuality, together with our partners and allies”, stressed Albares, who has defended that “Spain always comes when it is needed” and more so at a time when security is not at stake. only from Ukraine, but from Europe as a whole.

In this sense, it has clarified that the Government has not proceeded to modify the planned deployments within NATO, “beyond some specific advance”, stressing that said deployment is carried out in accordance with the requests of the allies and “with respect absolute of parliamentary authorizations”.

Both the deployment of troops in Latvia, as well as the next participation of fighters in an aerial police mission in Bulgaria, the shipment of the ship ‘Meteoro’ and the advance departure of the frigate ‘Blas de Lezo’ take place in NATO territory and international waters, and not in Ukraine, although “it sends a clear message of firmness and rejection of intimidation”, he stressed.

Finally, he indicated that there are currently 534 Spaniards in Ukraine, 240 of whom are in Kiev and another 54 reside in “particularly sensitive” border areas, in addition to eleven who are in the separatist regions of Donestk and Lugansk. As he clarified, for now there are no planned evacuation plans, since there are still commercial flights and the borders remain open.

For her part, the Minister of Defence, Margarita Robles, wanted to send a message of calm this very Tuesday in ‘Hoy por Hoy’, where she stated that “it is a worrying situation, but not a dramatic one. I hope that the democratic path has its fruits and have a happy ending.