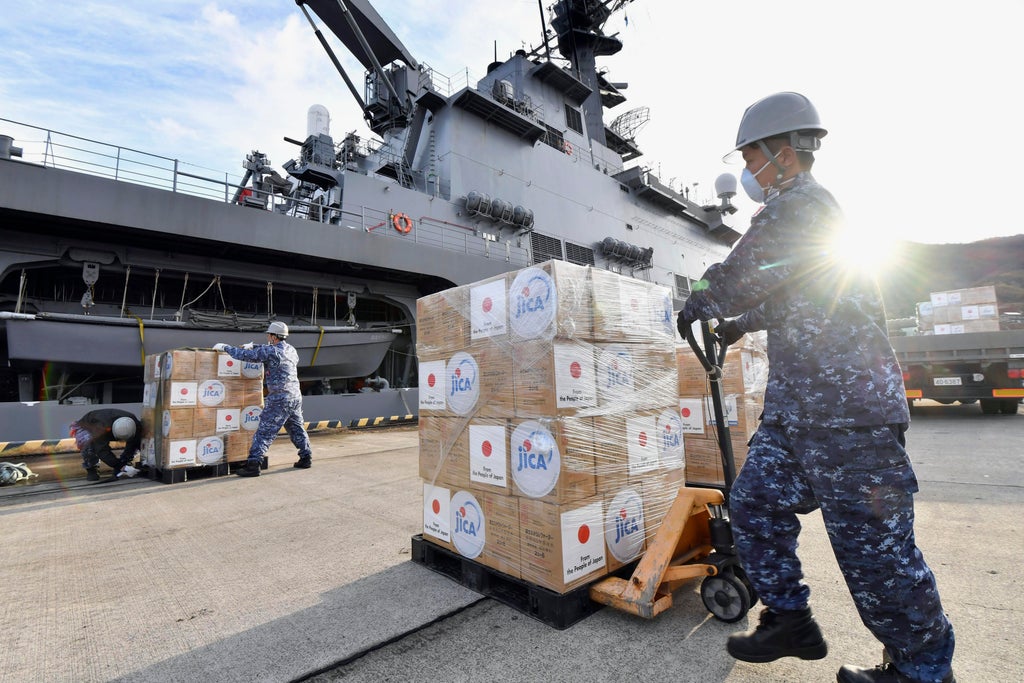 For more than two years, the isolation of the Pacific archipelago nation of Tonga helped keep COVID-19 at bay.

But last month’s volcanic eruption and tsunami brought desperately needed outside deliveries of fresh water and medicine, and brought the virus.

Tonga is just one of several Pacific Island countries to experience its first outbreaks in the past month. There is growing concern that their precarious health care systems could quickly become overwhelmed and that the remoteness that once protected them now makes it difficult to help them.

“Clearly, when you have countries that already have a very stretched and fragile health system, when you have an emergency or a disaster and then you have the possible introduction of the virus, that will make an already dire situation that much worse.” said John Fleming, Asia-Pacific health chief for the Red Cross.

Tonga was covered in ash after the massive Hunga Tonga Hunga Ha’apai underwater volcano erupted on January 15, and was then hit by a tsunami.

Only three people have been confirmed dead, but several small settlements on the outlying islands have been wiped off the map and volcanic ash has contaminated much of the drinking water.

The nation of 105,000 had reported just one case of COVID-19 since the start of the pandemic: a Church of Jesus Christ of Latter-day Saints missionary returning to the island from Africa via New Zealand who tested positive. in October, and authorities debated whether to let in international aid.

They decided they had to, but despite strict precautions when unloading ships and planes from Australia, New Zealand, Japan, Britain and China, two Tongan men who worked at the capital’s Queen Salote wharf handling shipments tested positive on Thursday. Tuesday.

The two were moved to isolation, but in tests of 36 possible contacts, the wife and two children of one also tested positive, while the others tested negative, local newspaper Matangi Tonga reported.

“The top priority now is the close contacts of these positive cases and who they interacted with” since January 29, Health Minister Saia Piukala was quoted as saying.

It was not clear how many people they might have been in contact with, but the government published a list of places where the virus could have spread, including a church for two days, several shops, a bank for two days and a kindergarten during school. . hours.

Prime Minister Siaosi Sovaleni told reporters that “some” of the five infected had started showing symptoms and were in quarantine at a medical facility. He imposed an indefinite lockdown starting at 6 p.m. Wednesday; one that could be particularly arduous for Tongans because most have been without an Internet connection since the volcanic eruption severed the country’s only fiber-optic cable.

It is not yet known which variant of the virus has reached Tonga, or who brought it.

Sailors aboard the Australian aid ship HMAS Adelaide reported nearly two dozen infections after an outbreak on board, but authorities said it had been offloaded at a different pier. Crew members aboard relief flights from Japan and Australia have also reported infections.

Experience from other parts of the pandemic, especially with the now predominance of the fast-spreading omicron variant, suggests Tonga faces an uphill battle in trying to contain the outbreak, Indonesian epidemiologist Dicky Budiman told The Associated Press.

About 61% of Tongans are fully vaccinated, according to Our World in Data, but because the country hasn’t seen any infections yet, there won’t be any natural immunity and it’s unclear if the shots were given long enough for them to now. be less effective, Budiman said.

The global experience has been that when the virus reaches those countries, the number of hospitalizations is very high, he said, recommending that the government immediately start offering booster shots and open-label shots to younger children.

“If we run with this virus, we won’t win,” he said in an interview from Australia. “So we have to move forward protecting the most vulnerable.”

This is already beginning to be seen in the Solomon Islands, which reported its first community outbreak on January 19. With only 11% of its population fully vaccinated, the virus has been spreading rapidly, with the Red Cross reporting that less than two weeks later, there are now more than 780 recorded cases and five deaths related to COVID-19.

On the other hand, Fiji, still recovering from the damage caused by Cyclone Cody in early January, has been battling a continued rise in cases, fueled by omicron, with cases reported for the first time in Kiribati, Samoa and Palau.

Palau has almost all of its population fully vaccinated, while Fiji has 68% and Samoa 62%, but Kiribati only has 33%.

The key to ensuring hospitals aren’t overwhelmed is making sure more people get vaccinated, Budiman said.

“These countries that choose to have this COVID-free strategy, they are very vulnerable,” he said.