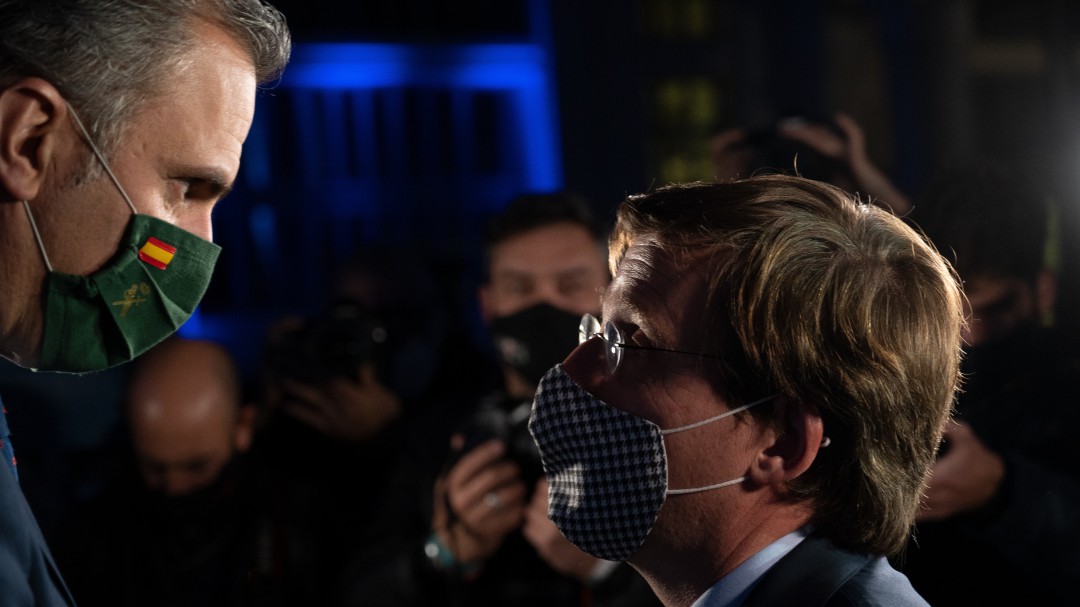 The same day that Isabel Díaz Ayuso has closed an agreement on budgets with her government partner, Vox, the mayor of Madrid, José Luis Martínez-Almeida, accused the spokesman of the Vox Municipal Group, Javier Ortega Smith, of doing ” an exercise in political bullying in which he is kidnapping all the citizens of Madrid for the sake of his personal and particular interest ”.

The contrast between the relationship of the popular and the extreme right in the Community and in the City Council has been evidenced this Tuesday. Ayuso and Monasterio have closed the budget pact that includes an audit on the centers for unaccompanied minors. Meanwhile, Mayor Almeida got involved with Ortega Smith in the plenary session of the City Council, after it told them not to count on them for the approval of the budgets.

However, Almeida did celebrate the position that Vox has had in the Community of Madrid, “doing an exercise of responsibility, because next year is decisive in the economic recovery”, recalling that PP and Vox “have had to sit down to negotiate ”to reach some agreements.

In this regard, the mayor did not understand “what problem he has in sitting down to negotiate the budgets” and regretted that Ortega Smith says in Congress that “the nationalists blackmail, that they make us all hostages of their votes”, when “what is doing with his four votes in the City Council, refusing to sit down with the Government team, is an exercise in political bullying in which the only thing he is looking for is his own particular interest ”.

In addition, he wondered if “there are any people from Madrid, and especially those who want a change in this city, who understand that due to a personal decision they do not even want to sit down to negotiate budgets.”

See also  Tom Brady: How many Super Bowls have you won? His age, team, stats and more

Almeida criticized Ortega Smith for saying that the municipal government “has betrayed its commitments, that he cannot support it, that he cannot be an accomplice.” In this sense, the mayor regretted that the Vox spokesperson “is able to tell the people of Madrid that this government is the continuity of the Carmena government or that this is a communist government.”

Regarding the rest of the municipal groups, he recalled that PSOE and Más Madrid “have openly said that they are not going to support these budgets, so“ if the socialist municipal spokesperson, Mar Espinar, says that I beg Vox, I do not beg them, but what I have clear is that I would never be in a party that begs Bildu, ERC or Junts ”.

As for the Mixed Group, he recalled that they have said that tax ordinances do not see them and, “for me, tax ordinances are a red line” because “it is essential to continue saving taxes. Therefore, “the next time Ortega Smith talks about lowering budgets, let him explain to the people of Madrid why he has not wanted to sit down and negotiate to reduce 60 million euros.”

“Neither kidnap nor blackmail this city”

Faced with this situation, the mayor of Madrid demanded that the Vox Municipal Group and its spokesperson “neither kidnap nor blackmail this city”, because “it has four votes that are important, but that those four votes cannot be the same as nationalism does in the Government of the nation ”.

In this sense, he added that “the people of Madrid deserve that Ortega Smith sit down, that they pay him to sit down, that the 125,000 who voted for him did so to influence this city and not so that in an exercise of political bullying, he decides that depending on the interest of Vox, here he is not going to sit down to negotiate ”.

Almeida commented that if Ortega Smith does not want to sit down to negotiate and “given that with the rest of the group the differences are substantial, it is obvious that he advocates an extension of the budgets in the Madrid City Council, which puts in serious danger and in serious management difficulties for next year ”.

Despite the continuous attacks, Almeida affirmed that “I continue to have my hand outstretched and I continue to invite him to sit down” because “we have a problem and that is that his four votes serve solely and exclusively to paralyze the city of Madrid and to not allow that the 2022 budgets, which are decisive for this city and for getting ahead, are indifferent to him because he is more interested in a personal question than a political one ”.

Therefore, it affected that Vox sits down to negotiate. “I do not demand that we reach an agreement, I demand that you sit down and negotiate for all the people of Madrid. What I am not going to do is confuse the personal level with the political one, because I seek the best good of the Madrilenians ”.

“He has been disqualifying me, insulting me and even charging me with crimes for two months”

Asked about the personal interest he was talking about, the mayor denounced that Ortega Smith “has been disqualifying me, insulting me and even charging me with crimes for two months.” For this reason, he added, “for a jurist like Ortega Smith, it should not be unknown that the imputation of a crime to a person, without being true, in turn can also constitute a crime.”

Almeida assured that “I am not going to enter that wheel”, but “I limit myself to verifying that for two or three months what he has done is insult me, disqualify me and charge me with crimes in public.” “I do not know why, although he says that I was the creator of the Mixed Group.”

“I do not know if he is mixing the personal with the political, but in recent months there have been a series of disqualifications and personal insults that transcend beyond the political, which is even contaminating what his position should be of at least sitting down to negotiate” the mayor concluded.