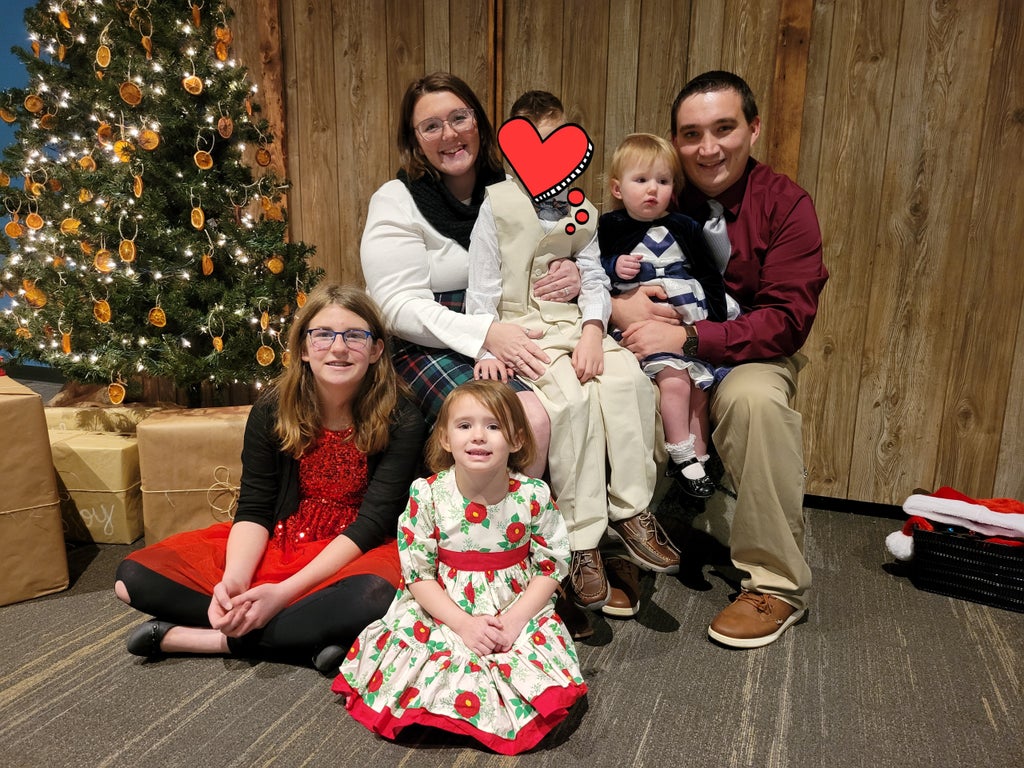 When the seven-year-old orphan from Ukraine arrived in Chicago right before Christmas to stay with his suburban host family, “he immediately fell into my wife’s arms,” Anthony Estes tells The Independent.

The air traffic controller and his wife, who already have two children of their own along with custody of their niece, had decided to take the boy into their home after hearing about an international program for hosting orphans.

“We didn’t know what his adoption status was at the time, but we already basically said that, if he was adoptable, that we would go forward with it – before we even met him,” Mr Estes, 27, continues.

The boy – whose name they’re not sharing as the process is ongoing – stayed with them in Plainfield, Illinois, until mid-January; “rambunctious” and “off-the-chain,” Shannon Estes laughs, he was a handful but they fell in love with him.

After he returned to Ukraine, the high school sweethearts filed adoption papers – two weeks before Russia invaded Ukraine, throwing their plans into total disarray. They’re scared and worried; they’re not even entirely sure where he is or what will happen.

They’d been aware, of course, of the simmering tensions between Russia and Ukraine, which reached a new level after Putin’s powerhouse annexed the Crimean Peninsula and invaded eastern Ukraine in 2014.

But “even the people in Ukraine we work with, even with them being surrounded by the Russian army, they still didn’t think anything was going to happen,” Ms Estes says – and the Illinois family held onto that hope, too.

But then the invasion did happen this week.

“We don’t really have a full way to get ahold of him, and we know … somewhat of an area that he’s in,” she continues, adding: “We were super worried, just more worried about how they’re feeling – because I cannot imagine being there right now as a small child that has no say in what happens to them.”

Anthony and Shannon Estes are far from alone in their fears and worries about children they’ve already woven into their families.

While international adoptions have severely declined in recent years, Ukraine has remained at the top of the list. In 2020, 211 Ukrainian children were adopted by US parents – more than from any other country, according to State Department figures. And that was during Covid, when travel and adoptions were severely restricted.

The previous year, 298 children were adopted by US families from Ukraine, making it the second-highest “country of origin” for international adoptees, the US Embassy in Kyiv tweeted in 2019.

“Most of these children have special needs or are older,” the embassy wrote. “Some were adopted together with their siblings.”

That embassy was evacuated prior to the Russian invasion and the State Department did not immediately return a request for comment from The Independent.

Before Kyiv embassy staff fled themselves, however, they were also advising adoptive US parents in Ukraine (and all Americans) to get out as fast as possible.

Texas couple Theron and Kelci Jagge, who’d traveled from the San Antonio area to bring home their adopted son, Ruslan – who has severe health problems – got caught in the frenzy and barely made it out.

“With Kyiv beginning to feel the fear of a pending war, we raced to the airport, hoping we could find a ticket,” writes the family’s nurse, Valerie Bitterman, who’d flown with the Jagges to Ukraine and subsequently started a GoFundMe for them in the aftermath of the ordeal.

“The US embassy had been evacuated, their documents and machines destroyed,” she writes on GoFundMe. “All emergency US evacuation flights had ended. Most flights were booked, and the airport was a madhouse with people frantic to escape.

“By the grace of God, we went through an immigration line that had a border guard that had not harassed us two days before, and she stamped our paperwork, and let us through! The level of relief in that moment was unlike anything we’ve ever experienced. Through a series of miracles and the help of extremely well connected people and groups, we made it on a flight to Turkey.

“From Istanbul we were able to piece together some flights to the US, so we could finally get little Ruslan admitted to the hospital. Over the final day we were in Kyiv, Ruslan was rapidly developing pneumonia. His little body of him is so tired of fighting. Fighting withdrawals, seizures, constant fluctuating fevers, fear, anxiety, and now pneumonia.

“We made it in time. Ruslan is safe and in the hospital, but struggling so very much… The Jagges now face mounting unexpected bills. The canceled flight from Kyiv to the US, the attorney costs, additional housing, drivers willing to drive and hide us across the country, 3 additional flights for 4 people, hotels, Turkish visas, leave of absences from work, and so much more. ”

As the Jagge family cares for little Ruslan at his new home in Texas, other prospective adoptive parents in the US are freaking out about the status of their loved ones still in Ukraine – many of them older children, as the embassy had noted.

The Estes family joined a call on Thursday night with other families hoping to adopt after bonding with Ukrainian children through the faith-based charity Host Orphans Worldwide (HOW.)

“They’re all just in the same boat as us,” Mr Estes says. “We don’t know what’s going to happen with these kids. We don’t know how long this is going to be.”

Other families, he said, were just “weeks away from going to Ukraine to go get their child, and they were pretty much told: ‘Everything is frozen right now’ – and they don’t know what to do.”

In Colorado, Clarke and Kris Stoesz – who adopted four children from Ukraine and began the non-profit Ukraine Orphan Outreach – understand that panic firsthand, given that they work hand-in-hand with so many people in the country and have maintained close ties with their children’ biological relatives.

They’re worried about those relations, friends, partners and other orphans remaining in Ukraine as the situation intensifies.

“We’ve heard from nine per cent of them. Haven’t heard from ones in far east part,” Kris Stoesz tells NBC 9 News. “I pray that Russia doesn’t take over because that will probably stop us from being able to do our work there, which breaks my heart. Then I don’t know what I’ll do.”

“I woke up this morning and was watching videos [of the invasion]. I’m heartbroken. I want to help,” her 22-year-old adopted daughter, Natalie, tells the station. “I just want to go over and support friends and family, make sure they’re OK.”

The fear is palpable for many families separated by thousands of thousands from their young and often vulnerable young ones. One couple in the Midwest, when contacted Friday by The Independentsaid through a spokeswoman that “they have been advised, for the safety of our children, not to do interviews anymore.”

“We’ve heard some of the orphanages have been told that they probably won’t have power and things like that,” Shannon Estes tells The Independent.

But their boy, she says, is “pretty rambunctious … so I can’t see him being super fearful – that’s the only good thing about it.”

She hopes his “go-with-the-flow attitude” will help after a life already so difficult at his age, and says: “He’s still so young that [he probably] doesn’t fully understand.”

“Lots of people keep asking how he is, where he is, and we’re like, ‘We really don’t know,’” she adds. “It’s more like just trying to stay updated with what’s happening, but not keeping yourself [frantic] with the news on all the time.”

The Estes family was planning to host their beloved Ukrainian boy again this summer as the adoption process continued; Because of the significant cost of international adoptions – which run well into the thousands – they have set up a GoFundMe and are pursuing other fundraising efforts.

Mr Estes says he’s “just hoping that it blows by really quick, and we kind of just figure out this month – because we have until June [to host him again]which seems kind of far away but not really.

“I kind of just hope that things settle down,” he tells The Independent“and they kind of figure out what the plan is.”