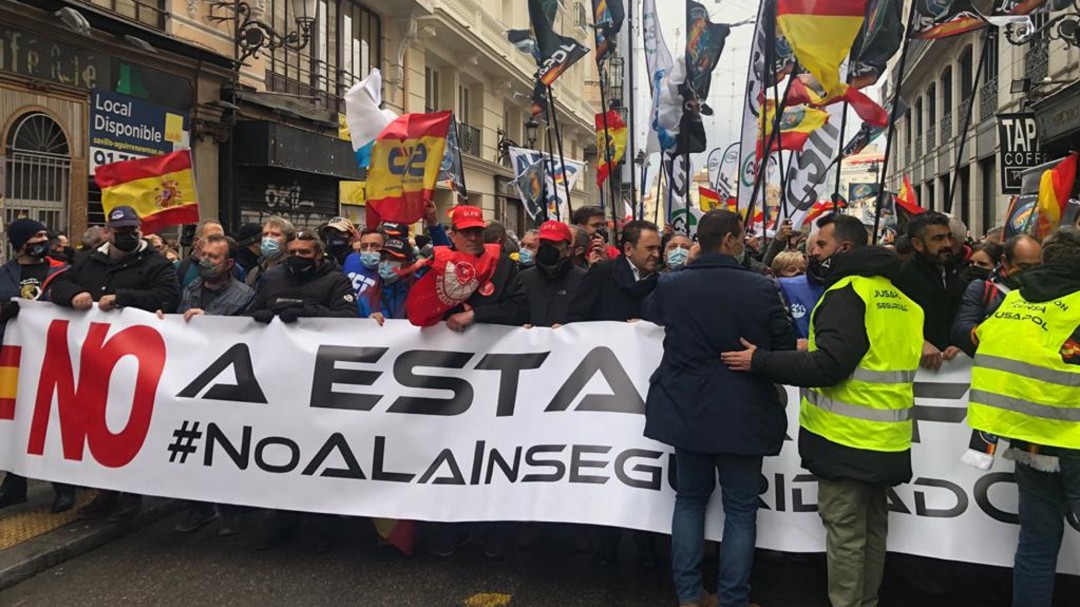 Agents from all police forces, from civil guards to national, regional and local police, take to the streets in Madrid this Saturday to protest against the reform proposed by the Government of the current Citizen Security Law, the so-called gag law, in a demonstration to which PP, Vox and Ciudadanos have joined.

Despite the initial discrepancies between unions and associations, finally all the representative groups of the State security forces have decided to attend the march sponsored by Jusapol, the association born in 2018 and from which Jupol and Jucil emerged, the two organizations currently with more representation in the councils of the National Police and the Civil Guard, respectively.

The organizations have asked the Government to “listen to the police” and take them into account when it comes to reforming the Citizen Security Law, something that, they reported, “has not been done.” This was indicated by the Jupol spokesman, Pablo Pérez, and the president of Jusapol, Miguel Gómez, during the demonstration in Madrid against the reform of a law that they described as “historic” for having brought together all the police for the “first time” both state as well as regional and local.

Under the slogan “No to insecurity in Spain”, the demonstration began at around 11:30 am from Puerta del Sol and is expected to culminate in front of the Ministry of the Interior, located at number 5 Paseo de la Castellana , next to the Plaza de Colón. The protest, in which a notable attendance of agents is expected, has been joined, as announced for the moment, by the leaders Vox and Ciudadanos, Santiago Abascal and Inés Arrimadas, respectively, although it is expected that the leader of the PP, Pablo Casado and the president of the Community of Madrid, Isabel Díaz Ayuso, who said weeks ago that she would participate in the demonstration.

The leader of Vox, Santiago Abascal, has indicated during the demonstration that he is in the street “together with the most loyal and most dedicated servants of Spain”, against “a law approved by the Government together with all the enemies of Spain and the constitutional order “.

For her part, Inés Arrimadas, has commented that her training is always “more with the police than with the criminals” and has denounced the “sectarianism” of the Government, which she has asked to stop “criminalizing” the police forces and bodies. state security. “Sánchez listens more to Bildu than to Spanish society,” he concluded.

Pablo Casado has shown his support for the protesters since the meeting of provincial and island presidents of the PP of León in which he is, commenting that “security and justice are those that guarantee freedom and it is something unusual that for the first time in democracy those who risk their lives to protect us have to demonstrate because you leave them sold. “

40,000 participants are expected, according to Interior

The Interior Minister, Fernando Grande-Marlaska, regretted last Monday in Mérida that the PP is trying to “patrimonialize” and “politicize” the security forces made up of professionals who have made the police forces the best valued institutions. “This image is also due to its neutrality, which should be preserved by all,” he warned.

In the protest this Saturday, which 40,000 participants are expected according to the Interior, the reproaches that the agents launched this Wednesday in front of the Government delegations against the changes that PSOE and United We can have agreed to introduce in the reform of the Security law will be repeated. Ciudadana, in force since July 2015 and which was approved with the votes of the PP, which had an absolute majority in Congress.

See also  Ever had bad sex? You're not alone – and the effects can last for years

Fundamentally, the trade union organizations, which call for the mobilization of the agents and the entire citizenry, consider that the future law will leave the police officers “defenseless” and their actions with less legal certainty.