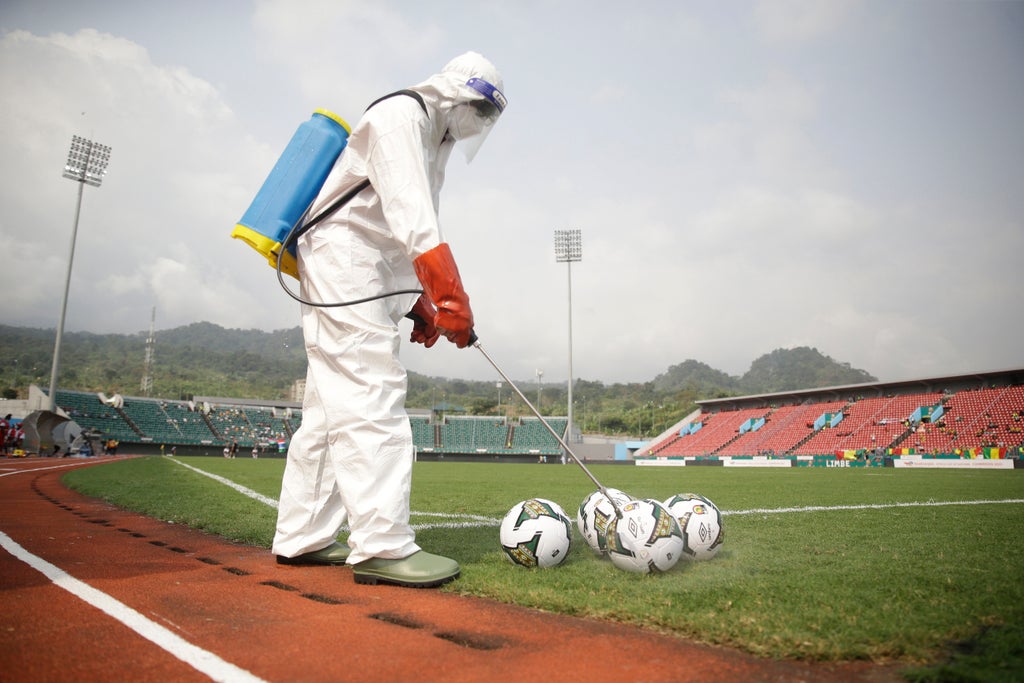 The risk is obvious when you hold a major international soccer tournament right after the emergence of the omicron variant and in a country with precariously low COVID-19 vaccination levels.

Less evident is the opportunity it may bring in the fight against coronavirus infections.

The Central African nation of Cameroon is treading a line amid the resurgent pandemic this month by hosting the African Cup of Nations, Africa’s biggest soccer tournament. It has brought 24 teams, more than 600 players based all over the world, hundreds of officials and an unknown number of fans into the country. Judging by the outbreaks in teams alone, many have arrived with the virus.

Cameroon is a vulnerable country where less than 3% of the population of 26 million is fully vaccinated against COVID-19, according to the global tracker from Johns Hopkins University By all indications, it’s exposing itself to a surge in cases.

But there’s a possible upside, a rare opportunity maybe, to increase vaccination levels in a low country on the global list.

Cameroon authorities have made it mandatory for fans to be vaccinated before they can watch any of the 52 games at the stadiums in five cities. After months of trying to convince Cameroonians to get their jabs and meeting resistance and hesitancy, they now have a tangible reward to entice soccer-mad skeptics.

So, here’s the sell: If you want to see Cameroon’s own Indomitable Lions, or Liverpool forward Mohamed Salah playing for Egypt, or other top stars on the field in your hometown in perhaps a once-in-a-lifetime chance (Cameroon last hosted the tournament 50 years ago), get vaccinated. Fans are able to get free shots and virus tests outside stadiums ahead of games, where tents have been thrown up and tables and chairs put out. Health workers await.

“I haven’t vaccinated myself yet because of the myth behind the vaccine. But I’m considering it, especially with the excitement that surrounds this AFCON,” said soccer fan Fon Lionel, using the common abbreviation for the African Cup of Nations. “Not watching at least one game in my own country will be like deciding to stop being a football lover.”

That’s the reaction Cameroon’s government hoped for when it came up with its game plan for the monthlong African Cup, which opened on Jan. 9 and ends Feb. 6.

“Football lovers who were a little bit reluctant in participating in the vaccination campaign have joined the crew,” said Dr. Erick Tandi of the health emergency unit at Cameroon’s Ministry of Public Health. “We have had an increase in the number of people going for the jab.”

He said the increase was “especially” in regions that are hosting games.

Cameron has fudged a little. It was announced that fans would have to be fully vaccinated and have proof of a recent negative virus test to get into a stadium. In reality, fans are getting into games right after receiving shots of the one-dose Johnson & Johnson vaccine but also some after only one dose of other two-dose vaccines.

It means some fans are not strictly fully vaccinated yet. But Tandi said “I don’t find any problem with that.” I have emphasized the goal is to give people at least some protection, and that negative virus tests are compulsory. Tandi also said the government is trying “not to frustrate people” who are hesitant about vaccines anyway.

Cameroon had a chance to ban spectators, like at last year’s Tokyo Olympics, but the government felt that it would be counterproductive during its biggest national event in half a century. Instead, it saw a chance, encouraged people to go to games, and acquired a new batch of two million vaccines for them.

But in a snapshot of soccer fans, vaccine hesitancy is still strong.

In the western city of Buea, Mbah Michael said he was desperate to go to games but “if taking the vaccine is the only way, then some people like myself might have no other choice than to follow the competition on TV.”

Unvaccinated fans are being turned away from games and some experts doubt that soccer can succeed widely in beating hesitancy when public health warnings have failed.

“Most fans don’t want to get vaccinated,” said Danirla Daniel, a vaccine pass controller at a stadium.

Dr. Gilbert Anyah, a private doctor in the capital of Yaounde, thinks there is too much focus on stadiums anyway, where crowds have fluctuated from a good size for Cameroon’s games to tiny for other matches. That’s typical for the African Cup.

Anyah is much more concerned with what’s happening away from stadiums and the inevitability of millions of unvaccinated Cameroonians gathering in crowds all over the country to watch the games on TV at restaurants, bars and other public places.