Skip to content
Home News Africa can also appropriate Spanish, shape it and take advantage of it | Africa is not a country | Future Planet 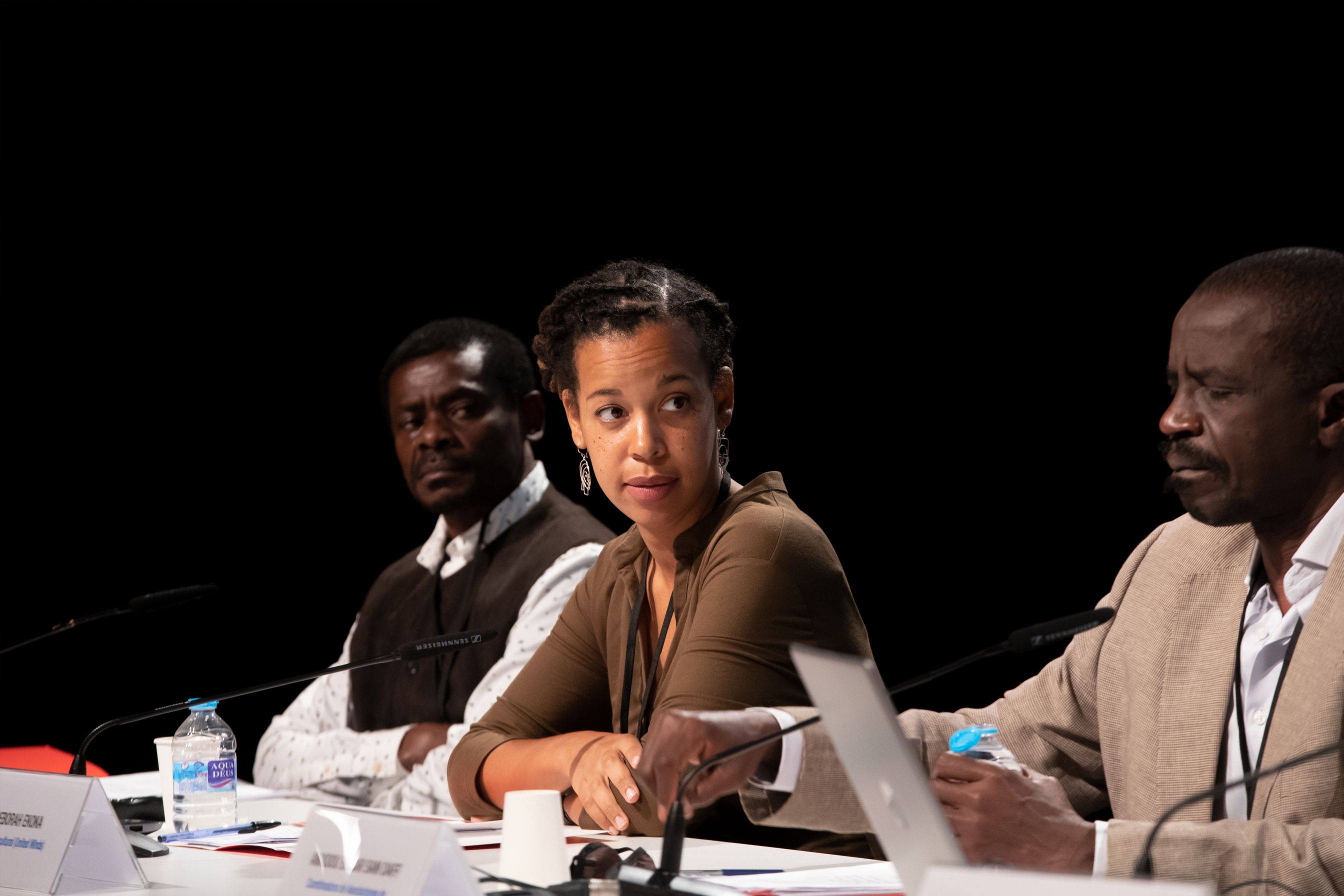 Approaches become frequent. There is a common tool as an excuse, which is not only an instrument but a matrix. It is about our language – Spanish – which could unite us more than what has been usual with our African neighbors until now. Hence the celebration of II Meeting of Hispanists Africa-Spain: the African footprint in Spanish be cause for encouragement. During three days held at the Cervantes Institute in Madrid last week —organized by Casa África and the Spanish Cooperation—, writers and academics from different African countries presented and debated opinions with local specialists in the field.

In addition to Equatorial Guinean literature in Spanish and its most established names, such as Donato Ndongo, who spoke at the meeting, or the young and most popular writers, such as Maximiliano Nkogo Esono, the event was also dedicated to Spanish. chosen by researchers, writers or African immigrants from other countries south of the Sahara. Because there is also Spanish in the universities of Anglophone and French-speaking countries, and, of course, in the writing of the diaspora.

Among other multifaceted issues, in Madrid, they talked about the themes chosen by fiction, the unattainable of a decent distribution of books that appear in large publishing houses, the initiatives to disseminate the African in countries like Spain (with a presence too recent history of the neighboring continent in literary culture) and, furthermore, of the teaching of this language abroad.

Auspicious experiences towards mutual knowledge were also reviewed, such as the one provided by the cultural manager and writer Deborah Ekoka, co-founder of the bookstore specialized in African literature. United Minds, from space Afro Consciousness, in Valencia, and Black Barcelona. Among the issues addressed by Ekoka, what reverberates is: What is the Spanish identity? Is it only white? “

A language permeable to orality

In his search for the traces of African culture in Spanish literature, Professor Ndioro Sow, researcher and professor at the Gaston Berger University of St. Louis (Senegal) analyzed the relations between Spain and Africa through the books that have been published. marked the common history, from “the black” in the literature of the Golden Age to the differences between colonial and postcolonial voices, on either side of the Mediterranean, including important references from Latin America.

This journey leads him to assure that “Spanish is no longer the language of the Spanish”, and not only because of the unavoidable presence of America, but because “Africa is also going to get involved in this linguistic concert”. The literature of Spanish expression, he affirms, “is not only the heritage of the countries that have Spanish as a co-official language.”

The literature of Spanish expression, says Sow, “is not only the heritage of the countries that have Spanish as a co-official language”

Indeed, his lecture revolved around the notion of “internal appropriation” or, what is the same, an “interpretive” approach, in recent decades, which allows “questioning and taking other perspectives of linguistic and cultural politics ”. Sow stops, especially, on what a colonial or post-colonial literature means, giving the example of when an Equatorial Guinean takes the floor and expresses himself as someone born in Spain, “reproducing racist or colonial discourses”, or when he does so through of characters who have their own voice, with perceptible African identities, “who are not involved in the discourse that disparages the black world, or of the barbarian versus the civilized.”

The Senegalese researcher proposes to ask, then, what is the African contribution to the language? The question would lead to find out if a literature “of assent” or an inevitable biculturalism is practiced, which is that of the African peoples in contact with what the European brings, and which entails a style permeated by the orality of the continent, which respects the own cultural processes of the colonized.

“Language is a door”, through which young writers from Cameroon, Benin or Senegal have entered. However, until recently, the key to that door was in France, according to Sow: “For decades, Spanish has been a highly studied language, without any direct relationship with Spain or Latin America, since it had to go through France to study Spanish. Thus, both teaching and research were mediated by the Francophonie. We have reached direct contact, which is progress ”.

The request of the Senegalese Hispanicist, at this point, is to avoid the errors of excessive centralism. And he concludes: “That Hispanicism is not like Francophonie: that it integrates possibilities for managing perspectives so that people can take advantage of the tool of language to express another reality.”

No yearning for nineteenth-century Hispanism

In turn, Amadou Bocar Sam Daff, president of the Coordinator of Senegalese Associations of Catalonia and author of the novel The black pearl (Saldonar, 2019), argued that African citizens, both outside and within the continent, have “appropriated” languages ​​such as English, French or Spanish, “sometimes to the detriment of their own languages” and that is the a finding that leads them to question “what is African literature”.

“From the diaspora, our role is to take care of what it means for us to speak those other languages,” says Sam Daff. Then he elaborates: “What is the genre in which we have to write? I think we have justified ourselves so much for being African that this has even permeated the literature and it shows in the most recent immigration. The time has not yet come for the democratization of literature, to show our talent. Those of us who come bring a baggage and we express it not in the language of ‘welcome’ but in that of ‘arrival’. I clarify this because all the terms have a value … like talking about ‘sub-Saharan Africa’, when it would be more correct to speak of Africa sub-Sahara. Decolonizing minds means ceasing to believe that our cultures and languages ​​are inferior. And this fight we cannot give it more than us ”.

Decolonizing minds means ceasing to believe that our cultures and languages ​​are inferior. And this fight we can not give it more than we

The other issue that the Senegalese writer addresses is who an emigrant who writes is addressing, when “the majority of Senegalese living in Catalonia do not know that I have written a novel and perhaps I also do not know what my neighbors or friends have written, among the more than 70,000 Senegalese living in Spain ”. Hence, their claim is that diaspora people stop being objects of study to be subjects and actors of their own reality. At the same time, assuming their “transnationalism” is, in their opinion, a way of living in mutual recognition with the host society.

Also forceful, the Equatorial Guinean journalist and writer Juan Tomás Ávila Laurel, author in the magazine FronteraD and on the blog Malabo, among others, analyzes that “the shared destiny between Equatorial Guinea and Spain has been deeply marked by the colonial fact, sustained by racist views of the successive dictatorial regimes that determined its own character”. According to Ávila Laurel, this explains the behavior of the reading community in the diaspora before the literary production of Guinean authors, in Spain, where disinterest or indifference stands out. In his opinion, this attitude corresponds to historical milestones such as the law of information silence on Equatorial Guinea, which prevailed in Spain between 1971 and 1976.

In his speech, Ávila Laurel confessed that he has been in Spain for 10 years and that he has never been invited by a national university, despite his long history of speaking at foreign academic centers. Likewise, he defended “the need for a Hispanicism that is not justified by colonialism.” And he concludes: “Unfortunately, there are still many eyes and many arms missing for the enthusiasm of teachers and students to be attended or reciprocated.”