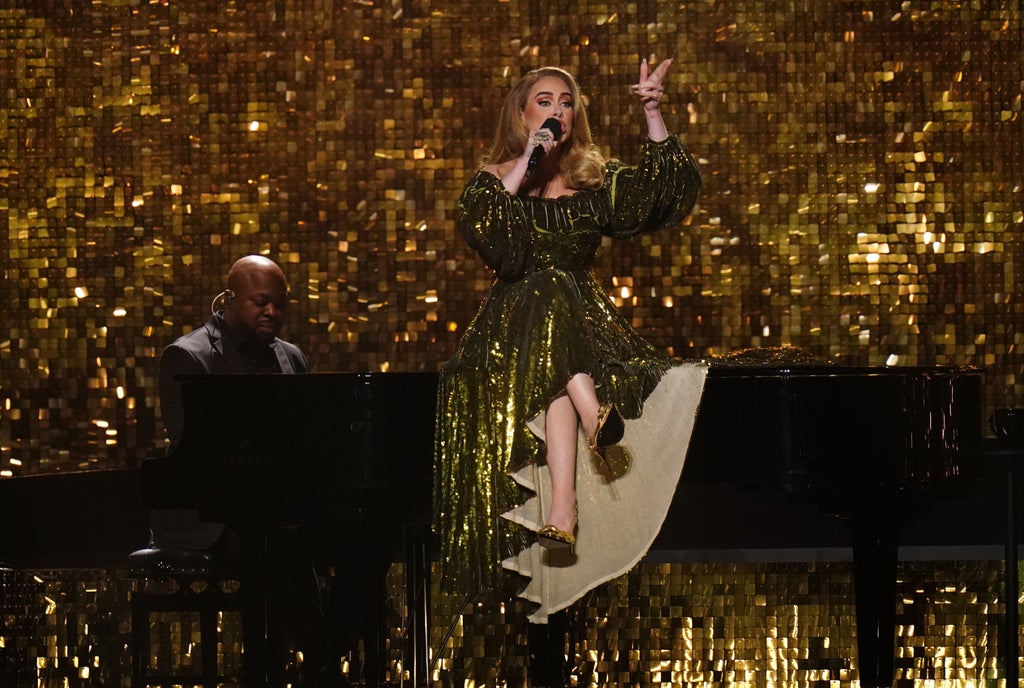 Adele has made a triumphant return to the Brit Awards – winning two awards and delivering a performance to thousands of fans.

The pop superstar, 33, won the first award of the night – song of the year for her hit single Easy On Me – after walking the red carpet wearing a sweeping black velvet gown with a tulle overlay.

She wore a large ring on her fourth finger, prompting speculation on social media that she is engaged to her sports agent boyfriend Rich Paul.

Later, the LA-based star was named artist of the year and celebrated female artists in her speech, after the category went gender neutral for the first time.

After praising fellow nominee Little Simz, she added: “Dave Ed, Sam – I am so proud to be in your company. I love being an artist, I really do, and I genuinely can’t believe it is my job.

“And real artistry – I know I have spoken about it before – but there are so many new artists here. England, the UK, we have so many incredible new young artists coming up.

“Never lose sight of why you are who you are. The reason people are into you is because of something you have in you. Don’t let go of that ever.

“And also, I understand why the name of this award has changed but I really love being a woman and being a female artist. Gone. I am really proud of you.”

Adele also delivered a rendition of I Drink Wine from her chart-topping fourth studio album, 30, dressed in a gold ballgown and matching stilettos, against the backdrop of a glittering gold wall.

She was accompanied by a band dressed in black, with three backing vocalists helping her through the chorus.

Host Mo Gilligan introduced her as the “undisputed queen of the Brits”.

Adele last performed at the awards in 2016, singing When We Were Young while also taking home four awards.

Her performance came after she postponed her Las Vegas Caesars Palace residence at short notice, with Grammy-winning country music star Keith Urban stepping in to replace her.

The Brits academy faced pressure to do away with its male and female-specific awards this year and has scrapped gendered categories, introducing gender-neutral gongs in their place

Nominations for the Brit Awards this year feature the most women in more than a decade, with 18 female artists or all-women groups receiving nods.

Billie Eilish claimed the award for international artist for a third consecutive time and said in a pre-recorded message: “I am so honored and feel so lucky to be awarded this again. I don’t feel deserving,” before expressing her excitement at headlining Glastonbury this summer.

Presented by Ronnie Wood, the award for rock and alternative artist went to Sam Fender

The musician, from North Shields, thanked his fans in the North East and his manager, while the award for dance artist went to Becky Hill.

The Crown actress Emma Corrin made a surprise appearance during Little Simz’ performance, wearing an all-white outfit including a white headdress.

US rapper and singer Doja Cat was forced to pull out after members of her crew tested positive for Covid-19.

The 2022 Brit Awards continue on ITV.