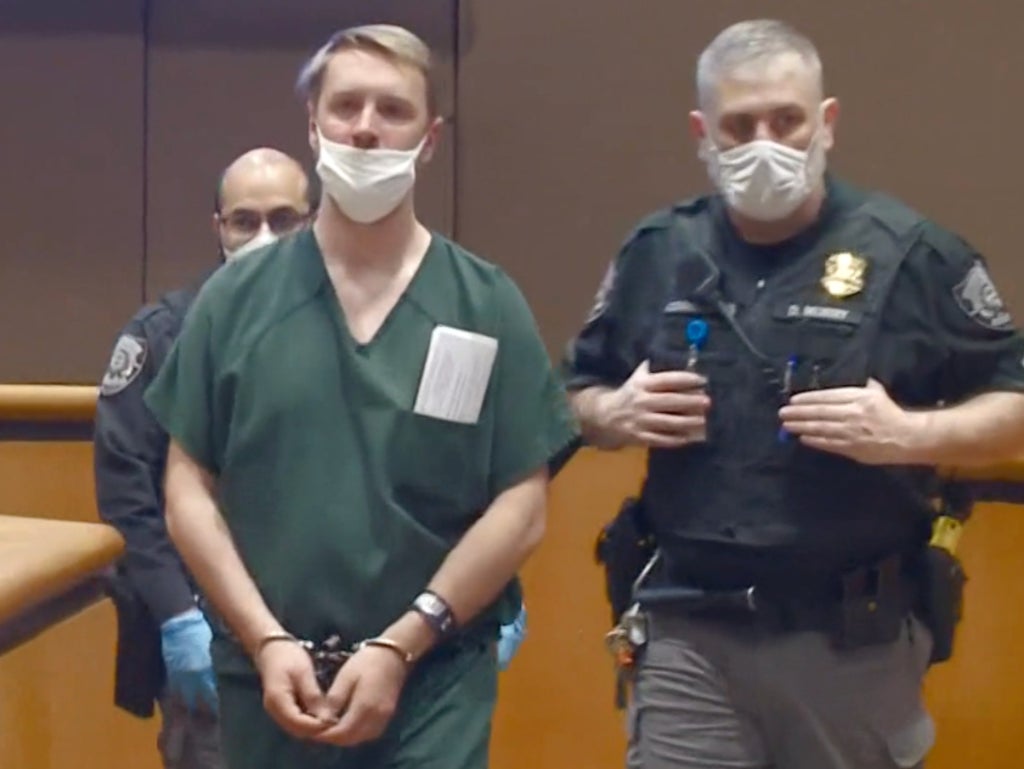 A former landlord of the suspect accused of shooting dead one man and wounding another in a Fred Meyer grocery store has described him as a “parasite” and “Hannibal Lecter” who “terrorized” him and their other roommates for months.

Bryant Scott told The Independent that he tried to get “master manipulator” Aaron Christopher Kelly, 38, to move out of his home in Washington following a pattern of disturbing behavior – but he refused to leave.

Mr Scott claimed Mr Kelly tried to poison his dogs, walked around the home at night dressed in military gear and armed with a gun “as though he was looking for something” and left him so fearful for his safety that he would barricade his room shut at night.

But Mr Scott said his requests for a restraining order and for law enforcement to confiscate Mr Kelly’s firearm were denied by a judge.

Ultimately, he was left with no choice but to move out of his own home and sell the property in order to finally get away from him.

Now, 11 months on, Mr Kelly is facing charges of first-degree murder and first-degree attempted murder after allegedly shooting two people inside a supermarket in Richland, Washington, on Monday.

Justin Krumbah, a 38-year-old Instacart shopper, was shot multiple times in an aisle of the supermarket and died at the scene.

Mark Hill, a 66-year-old Fred Meyer employee, was shot close to the customer service counter. He remains in a critical condition in hospital after undergoing surgery.

Mr Kelly was arrested hours later along an interstate 130 miles from the scene, following a huge manhunt.

Mr Scott said he first met the suspected gunman in early 2019 when he was renting out rooms in his home on Airbnb.

The military veteran said he was trying to make some extra money because he was unable to work due to injuries he suffered in the Marine Corps.

At first, Mr Scott said he fell for Mr Kelly’s “shallow charm” and the 38-year-old would stay for the odd day here and there.

But soon he was staying more and more frequently before one day he messaged to say “I took the liberty of getting my mail sent to the house”.

Mr Scott said his “stomach dropped” but because of his recovery he “wasn’t thinking clearly”.

He said he later learned from his attorney that this was a tactic often used to try to establish residence at an address.

“He knew I was an easy target. I was learning how to walk again and he saw this as an opportunity,” he said.

“He was a parasite.”

Then, with Mr Kelly now staying for months at a time, Mr Scott said the 38-year-old suggested to him that they cut out the middle man of Airbnb so they would both save on fees – effectively taking away the homeowner’s “safety net ” to be able to evict him.

Soon after, Mr Scott said he and his other roommates became increasingly “uncomfortable” with Mr Kelly as he “turned into his true self”.

“I would turn around and see him sitting silently behind me in the dark while I was on my computer,” he said.

“I loved invading people’s privacy – it was a power and control thing.”

Items and cash also began going missing and he would “watch” Mr Scott’s girlfriend and another female tenant.

Things came to a head around August 2020 when, concerned about his tenant’s behaviour, he hired a private investigator to carry out a background check

Mr Scott said he learned that Mr Kelly had “lied about everything” including his age, his education, his work and where he was from.

“Everything he told me about himself was a lie,” he said.

“He told me he was 28, that he had two masters degrees, that he had his own business, that he was from Portland when he’s actually from Texas.”

Mr Scott said he got into an argument with Mr Kelly and told him he wanted him out of his house.

The next day, he said Mr Kelly pretended like nothing had happened and then refused to leave.

After that, Mr Scott said the situation got “worse and worse”.

“He was peeing in bottles and pooping in boxes and then throwing them in the garbage,” he said.

“He also tried to poison my dogs – I had puppies and he put gum in their food.”

The pandemic-related moratorium meant Mr Scott could not evict him and his request for a restraining order was denied, he said.

Mr Scott said that the situation became so bad that he and his girlfriend would barricade their bedroom door at night with a dresser for fear that Mr Kelly would do something while they were asleep.

He said he put cameras up in the home which would capture Mr Kelly walking around at night carrying a pistol and a flashlight while dressed in paramilitary attire and a ski mask.

In the end, Mr Scott said he was forced to move out of his own home “for my safety” and said that the only way to get Mr Kelly out was to sell the property.

Mr Kelly was finally evicted last March with several police officers called in to remove him, he said.

Mr Scott said he didn’t hear from his tenant again after that but, when he moved the last of his things from his home before the new owners moved in, he saw Mr Kelly parked in his car over the road watching.

Even after moving home, Mr Scott said he had been so fearful of what Mr Kelly is capable of that he relocated to another town and installed 360-degree security around his home.

“I’ve got sensors on every door and I showed his photo to neighbours, warning them that if they saw him to call the police,” he said.

Mr Scott told officers Mr Kelly had been “mentally spiraling”, was “very paranoid” and that he had previously seen him with a 9mm handgun, the documents state.

He had recognized the man in the surveillance photo as his former tenant and roommate.

Even now with Mr Kelly behind bars, Mr Scott said he is still dealing with the stress of the situation.

He receives counseling and said he has not been able to eat or sleep or focus since Monday’s attack.

Mr Kelly is being held on $1m bond and is scheduled to appear in court for his arraignment on 23 February.

GoFundMe pages have been set up to help the family of Mr Krumbah with funeral costs and mr hill with medical expenses.