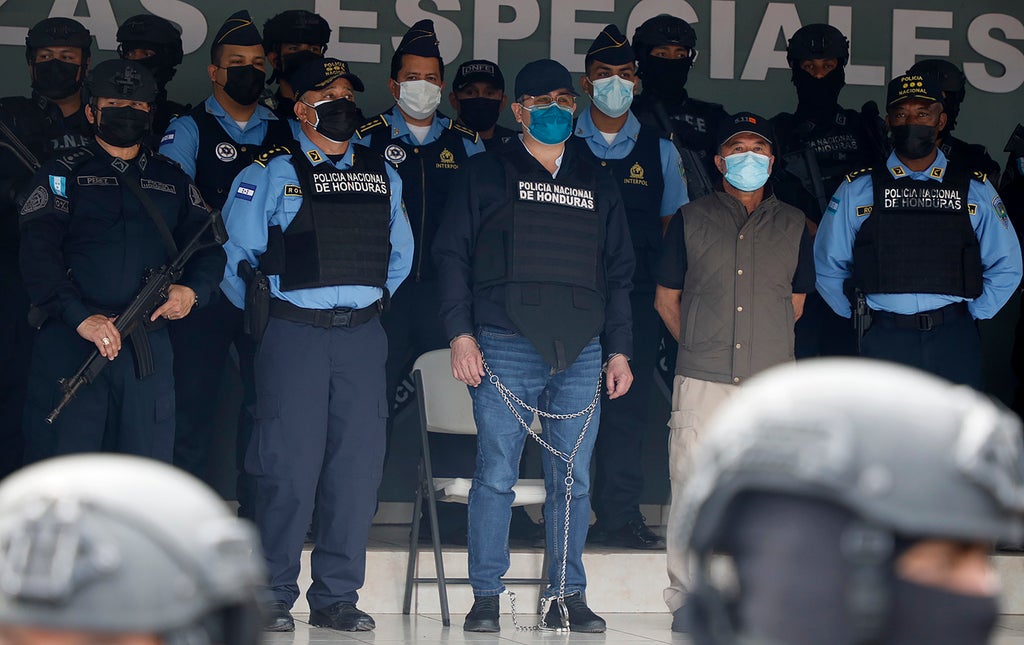 The arrest of former Honduran President Juan Orlando Hernández and the images that followed — a leader shackled and paraded before the cameras like a common criminal — were a stunning reversal for a man who for years seemed impervious to growing allegations of corruption.

While president from 2014 until last month, he had the support of US officials waging the war on drugs and some diplomats who did not see a better option. But less than three weeks out of office, his utility exhausted, the US government moved for his extradition and the chance to make him an example in a region wracked by corruption.

Hernández was scheduled to make his initial court appearance in Tegucigalpa on Wednesday. He was arrested Tuesday at the request of the US government on charges of drug trafficking, using weapons for drug trafficking and conspiracy to use weapons in drug trafficking.

US prosecutors in the Southern District of New York have accused Hernández in recent years of funding his political rise with profits from drug traffickers in exchange for protecting their shipments.

For years, images were Hernandez’s crutch. Accusations of ties to drug traffickers would stream from a New York City courtroom and Hernández would soon pop up in the United States or at an event with US Embassy officials in Honduras, reinforcing the idea that he had US government support and it was just bitter drug traffickers telling stories to seek revenge for his efforts against them.

All the while, popular discontent with his government grew in Honduras. There were n’t enough jobs, street gangs controlled entire towns and neighborhoods, drought and hurricanes hit swaths of the country in a devastating one-two punch and Hernández began to symbolize all their troubles from him.

Hondurans fled by the thousands, literally walking out of the country with nothing but a change of clothes in their knapsacks. Migrant caravans drew international attention and never lacked groups of young migrants shouting “Get out JOH!” using his initials from him.

“How great that they arrested him, he was very corrupt,” said Ilchis Álvarez, a Honduran migrant in southern Mexico.

“He was in the government for 12 years, caused a lot of people to migrate, there was a lot of corruption, there was a lot of unemployment,” said Álvarez, who was protesting Tuesday in Tapachula for Mexican authorities to give legal passage for migrants like himself to the US border.

Álvarez said he lost his job in a wire factory during Hernández’s presidency because the president raised taxes. He spent two years looking for another job before becoming a cab driver, but he still couldn’t support his two kids so a month ago he set out hoping to reach the United States.

Another migrant, Zayda Vayadares, hadn’t even heard of Hernández’s arrest, but expressed joy. She was traveling with her 6-year-old autistic son. She said she never received help from the government.

“The country was bad economically (under Hernández), you could never find a job,” said Vayadares, who camped with other migrants in downtown Tapachula. “The gangs were always extorting and killing people.”

US Sen. Jeff Merkley, who had pushed for sanctions against Hernández, said in a statement, “It was completely unacceptable that the US government was supporting former President Hernández despite his extensive ties to narco-trafficking, including an alleged pattern of using campaign funds and taxpayer resources. to protect and facilitate drug shipments to the United States.”

When Xiomara Castro’s third run for president gained traction with the help of timely alliances, Hondurans’ dissatisfaction coalesced around her candidacy. They swept her into office in last November’s elections intent on punishing Hernández and his National Party from him.

A catchy song played on a loop at Castro campaign events predicted that Hernández was headed for trial in New York.

On Tuesday, Castro’s Vice President Salvador Nasralla shared video of Hernández being led away from his home in shackles, writing: “This is what awaits the accomplices of Juan Orlando Hernández who produced so much pain, emigration and death for the Honduran people.”

Still, the images of the handcuffed former president were hard to watch. “I really felt sorry for him because we are human and we have a heart,” he said.

Herson Vásquez said he thought of Hernández’s mother, wife and children, but also how corrupt his arrest made Honduras look to the rest of the world.

“If he’s guilty of all the crimes that they accuse him of he has to pay,” the 43-year-old music teacher said.