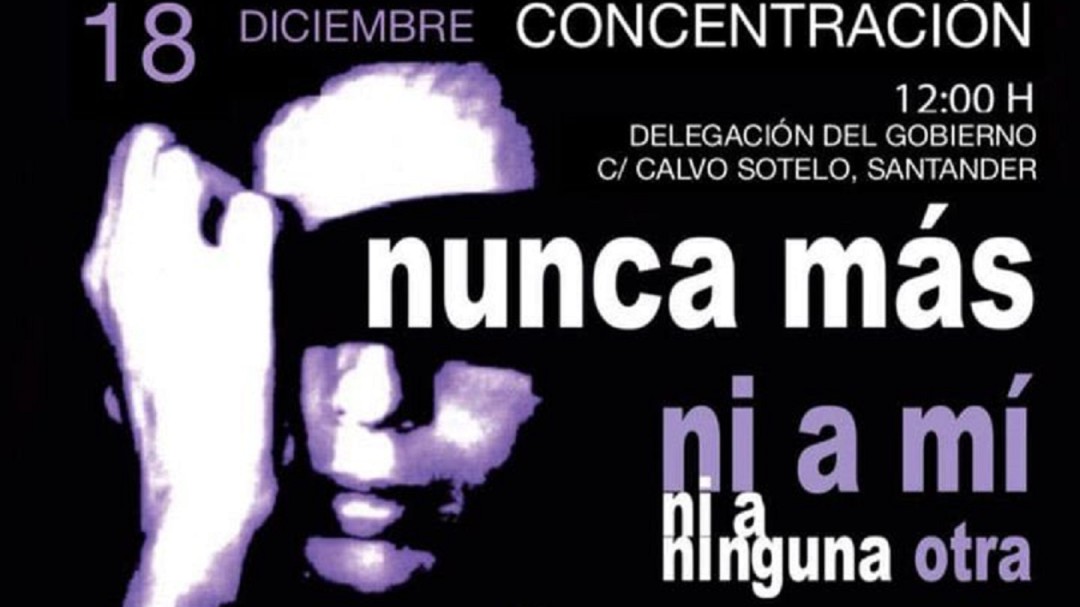 The March 8 Commission has called this Saturday a concentration against the sexist murder of a 40-year-old woman and their eleven-month-old daughter in Liaño de Villaescusa, under the slogan ‘Never again, neither to me nor to any other’ . It started at 12 noon in front of the Government Delegation, in Santander.

“Our society has failed them and we will say it loud and clear this Saturday at 12:00 in front of the Government Delegation: Not one less, not one more,” the Commission said in a statement.

“We are here because we want to convey our solidarity and our pain to Eva’s family and her sons and daughter,” said Ana Bolado, spokesperson for the March 8 Commission, convener of the concentration, and added that the two orphans who he leaves the woman murdered yesterday in Liaño de Villaescuasa “they are already our responsibility.”

Ana Bolado has read a manifesto in which she emphasizes that the laws to protect women that have been achieved “with so much effort” in Spain are “in danger” because “there are political organizations that seek to end them, because they deny gender violence, because they despise work, the social and political activism of the feminist movement “, which, in their opinion,” can cost more lives.

He also regretted that “after 17 years of validity of the comprehensive law against gender violence” we are not making it work as it should, that it saves our lives, “he said.”

The Civil Guard arrested yesterday, Friday, the alleged perpetrator, 43 years old and former partner of the murdered woman, in El Astillero, after locating in the house the lifeless bodies of the woman and her daughter, whose relatives had denounced her disappearance.

The detainee had a restraining order from his ex-partner issued by the Criminal Court number 5 of Santander. The judicial authority has decreed summary secrecy for these events.

In addition, the Corps has opened a reserved investigation into the actions of the agents. The victim had called the Civil Guard before appearing dead and they want to know the details of their actions.

During his speech at the XIV Provincial Congress of the PSOE of Cádiz, in which he participated together with the leader of the PSOE-A, María Jesús Montero, Minister of Finance and Public Health, he began his speech repudiating the crime. “From the Congress of Cádiz we want to say to all the women of the world: not one more victim, not one more dead, denigrated, despised or murdered woman for the simple fact of having been born a woman”, she has proclaimed.

The president of Cantabria, Miguel Ángel Revilla, has attended the rally where, accompanied by Mayor Villaescusa, Constantino Fernández, has expressed his “rejection of a terrible event” that “meets all the conditions of being the most tremendous, not only because of kill his wife, also an eleven-month-old girl. “

“The human mind is a mystery,” said Revilla, amazed that a person can “do that.” And he explained that he has attended the rally to show solidarity with the family and “protest.” In addition, he has urged to be “very rigorous with these people” who, like the detainee, have a “restraining order”, with precedents of mistreatment.

“It is a misfortune that has flattened us all,” said Revilla, who specified that “he knew the woman” who was murdered, because she had “attended him many times” at the restaurant where he worked. “He was a kind, hard-working person,” Revilla explained, adding that the victim “brought forward” his children.

“He was an exceptional person who has stumbled upon this soulless man and the tragedy has occurred”, who considers that facts with this “have no explanation and you wonder how it is possible, what will be in the heads of those people.”

And he has asked “that the control of these people and the precautions be extremely extreme, when there are previous complaints of mistreatment”, as there were in this case.