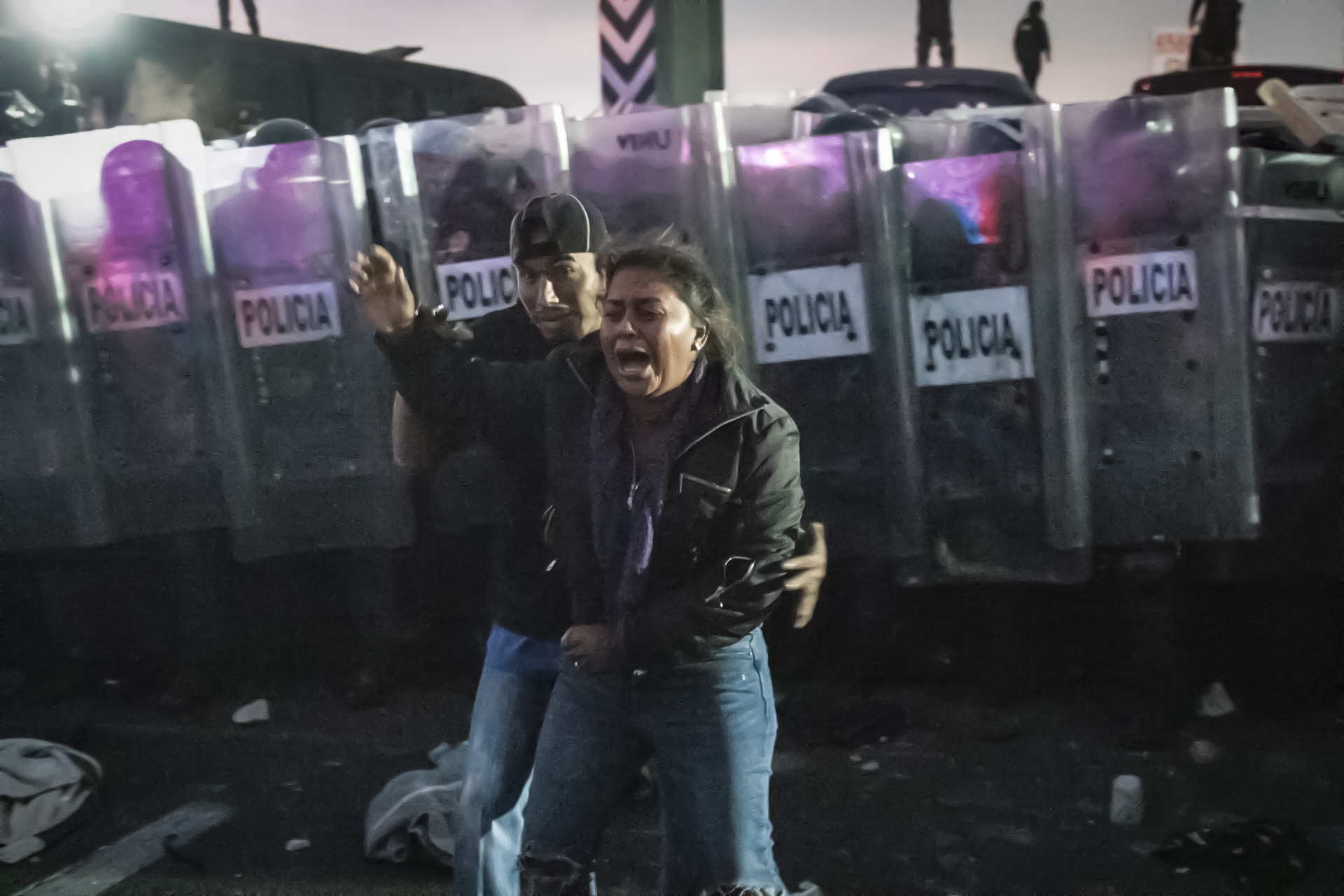 The latest caravan of Central American migrants entered Mexico City this Sunday amid strong tensions with members of the Secretariat for Citizen Security. A group of a few dozen people has collided with elements of the police, who were trying to block their progress on the road from Puebla. The march has tried to overcome by force the agents at the height of the Concordia Bridge, in Santa Martha Acatitla, in the Iztapalapa neighborhood, which has led to a scene of struggles, screams and charges that has lasted for several minutes, according to videos and testimonies of witnesses present at the scene.

Among the shouts of the members of the caravan asking for help and insults to the witness agents who witnessed the confrontation from a distance, the march has tried to break through a wall of dozens of policemen, who have responded with charges and tear gas, according to the migrants themselves. “We wanted to go through, they wouldn’t let us and we kept pushing. They cornered us and threw gases at us, grabbed several women by the necks, the children were thrown down and began to beat us. I don’t know what happened, but many people are looking for their relatives, there are injured people ”, declared one of the migrants, who preferred not to give his identity for safety, to volunteers from the Gilberto Bosques Saldívar Brigade, who accompany the contingent. At the time of publication of this news, the Secretariat of Citizen Security has not ruled on the matter.

The authorities have set up a shelter for the members of the caravan to spend the night in Santa Martha Acatitla, although the migrants have rejected its use. Instead, they intend to reach the Basilica of the Virgin of Guadalupe, which celebrates its festival this Sunday. “We want to get to the Basilica, and I don’t know why they don’t want us to go up, we want to thank, we came from Tapachula walking. What they are doing is something unfair, to receive us like this, we just want to go to the basilica, I think that cannot be denied to anyone, ”the same anonymous source assured in a recording that the brigade members have taken and which EL PAÍS has had. access.

The confrontation has resulted in at least a dozen injured among the migrants, one of them seriously after receiving a stone to the head, according to the newspaper The Day, which also speaks of “several police officers with injuries.” The Human Rights Commission of the capital has intervened in the conflict to mediate between the authorities and the members of the caravan. Finally, the agents have agreed to withdraw and allow the march to pass, which has continued on its way to the Basilica of Guadalupe in buses managed by the Commission, where they hope to spend the night.

The contingent, made up of about 1,000 people, according to members of the caravan, 327, according to the Government of Puebla, spent the night in Río Frío, on the border of the State of Mexico, 60 kilometers from the capital. They left Tapachula on October 23, a city of 300,000 inhabitants on the border with Guatemala, which has become an open-air prison for the more than 35,000 migrants who are being held by the security forces. From there, from time to time caravans leave to try to break through the government’s siege.

This blockade is the second they have encountered in four days. Last Thursday, a detachment of the National Guard also cut off the road from Puebla, to which the march responded with a protest blockade that paralyzed traffic for more than eight hours, generating 20 kilometers of vehicles at its worst. detainees, according to Federal Roads and Bridges of Income and Related Services (CAPUFE).

Although the blockages are just one of the problems that the caravan has had to face. Its members risk being disappeared, assaulted, assassinated, recruited by organized crime against their will or detained and beaten by immigration agents, who try to contain or deport them. The migration crisis experienced one of its worst moments on Thursday of last week, when a trailer with 160 Central American migrants crammed into the truck bed, mostly Guatemalans, had an accident in which 55 people died.

Sex and the City: And Just Like That star Sarah Jessica Parker hasn’t spoken to Chris Noth since sexual assault allegations