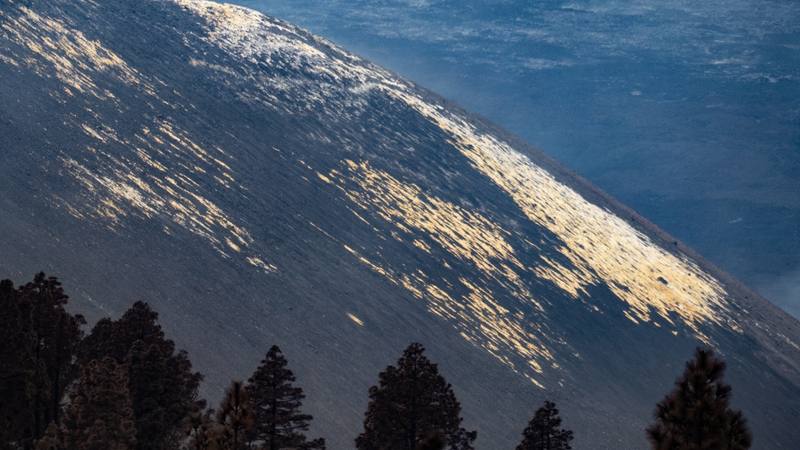 The La Palma volcano celebrates a week without eruptive activity with a surprise for scientists and palm trees: the elevation of eight centimeters of land at the Roques de Jedey geodesic station, LP03, the closest to the emission centers. A fact that in these three months of eruption used to be the prelude to a spike in explosive activity.

However, for the spokesperson of the scientific committee of the Special Plan for Civil Protection and Emergency Assistance due to volcanic risk in the Canary Islands (Pevolca), Carmen López, this new elevation of the terrain “does not imply a change in the depletion of the volcano” since is already in the reversion phase after the maximum of 8 centimeters that was measured at 10 p.m. on Sunday and it is about a very local deformation.

López has stressed that even when the eruption is over, episodes of seismicity and residual deformations may occur, as already happened in El Hierro, since they are very intense processes that need a readjustment time.

A) Yes, the tremor is still at the level of “background noise”, seismicity is very low at all depths, with a maximum magnitude of 3.2 mbLg, and sulfur dioxide (SO2) emissions are very low, with values ​​lower than 0.5 kilos per second. This reduction in SO2 emissions is related to the solidification process of the superficial magma in the conduits of the eruptive center, López explained.

In addition, occasional and sporadic emissions of volcanic gases continue to be observed in the eruptive centers and jameos, where the incandescence linked to the presence of lava in cooling process.

Binter recovers its activity on La Palma prior to the eruption

Another of the sections exposed by Pevolca is that before the absence of ash in the troposphere, the operation of the airport from now on will be subject only to purely meteorological conditions. A situation that has allowed the Binter Canarias airline to announce the recovery of its operations prior to the volcanic eruption with the island of La Palma.

The Canarian company has already scheduled the flight that operates at 8:00 p.m. from Tenerife, which allows the plane to spend the night at the Palma airport and offer a connection from 8:00 a.m. the next day. Progressively, and thanks to the significant improvement in conditions, the airline will incorporate more daily connections in order to meet the demand for air connections with the island.

Who and when will they be able to return to their homes on La Palma?

No serious alterations in air quality

The Pevolca technical director in temporary replacement of Miguel Ángel Morcuende, Rubén Fernández, explained that work is continuing on monitoring gas concentrations, especially in La Bombilla, Puerto Naos and El Remo, which is the area that worries the most the direction of the Plan because very harmful and even lethal values ​​for people have been detected. The UME, Civil Guard and National Police are intervening in the measurements, carrying out daily access control to guarantee the entry of residents and irrigators, in safe conditions.

In the last hours there have been no incidents in terms of air quality in populated areas, where sulfur dioxide levels are good except in the San Antonio station, where it dropped to regular levels during the early morning. . Regarding particles smaller than ten microns, there has been a slight increase in all stations, but always within parameters between good and reasonably good.

See also  'We cannot and will not look away': Boris Johnson promises 'massive' action against Russia