Skip to content
Home News ‘A nationwide insurrection’: Protests spread from Ottawa to Toronto and Quebec over trucker vaccine mandate 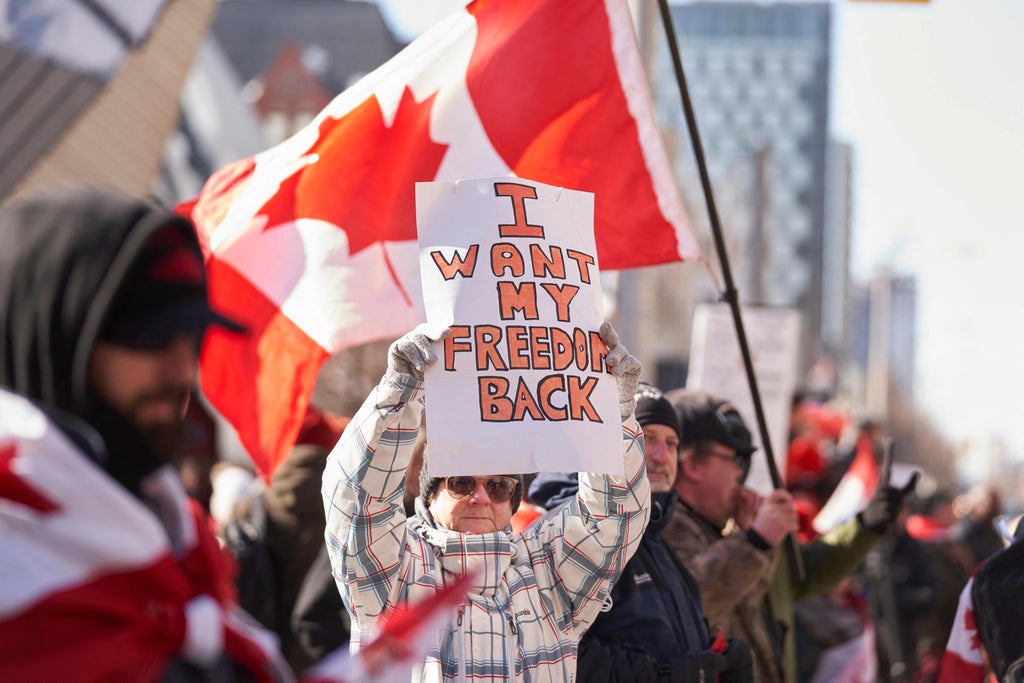 Protests over Canada’s Covid-19 vaccine mandate for truckers have spread from Ottawa to Toronto and Quebec city in what police officials have described as “a nationwide insurrection”.

Thousands turned out to support the Freedom Convoy on Saturday, with Ottawa Police Chief Peter Sloly reporting that around 7,000 protesters and 1,000 vehicles had descended on the streets of the nation’s capital alone.

Some demonstrators rode through the city on horseback, with one rider seen waving a “Trump 2024” flag in videos and photos posted on Twitter.

The huge crowd was met by around 300 counterprotesters, with police warning that – even with all officers on duty and hundreds of other officers drafted in to help – they do not have enough manpower to close the blockade down.

Chief Sloly told an emergency meeting of the Ottawa Police Services board on Saturday afternoon that “we need an additional surge of resources”, after Canadian Prime Minister Justin Trudeau ruled out deploying troops to the streets.

Ottawa Police Services board Chair Diane Deans described the crowds as “terrorists” and warned that they pose a “threat to our democracy”, reported CBC.

“They are terrorizing our residents, torturing them with incessant honking, threatening them and preventing them from leading their lives. People cannot go to work or open their businesses.

“They cannot sleep, walk, shop, go to medical appointments or enjoy their neighbourhood,” she said at the emergency meeting.

“This group is a threat to our democracy. What we’re seeing is bigger than just a city of Ottawa problem.

“This is a nationwide insurrection. This is madness.”

A huge convoy of truckers has brought Ottawa to a standstill for more than a week, since they first descended on the city and blocked highways connecting the US and Canada back on 29 January.

The protest came in response to the government’s introduction of a vaccine mandate on 15 January that Canadian truckers must be fully vaccinated to cross the border into the country.

Over the past week, the protests have swelled and turned into a rallying cry against the government’s pandemic restrictions, with demonstrations taking place in several other Canadian cities at the weekend.

In Toronto, thousands took to the streets of the nation’s largest city and blocked a major intersection for hours.

On Sunday, Toronto Police tweeted that it was keeping road closures in place to “protect our healthcare workers, patients, and their families, and maintain public safety.”

Over in Vancouver, five people were arrested on Saturday for “violent behavior and unlawful conduct” following reports of rocks and eggs being thrown, cars being kicked, and nails being strewn on roadways, according to local police.

This came after a 42-year-old man was arrested for allegedly driving his vehicle into a group of protesters in Winnipeg on Friday night, injuring four people.

While many protesters have been peaceful, Ottawa officials have launched a hotline to report hate incidents in the city amid multiple reports of harassment and assaults.

Four people have so far been arrested on hate crimes charges in Ottawa and others have been seen flying Nazi and Confederate flags.

Footage also surfaced online of some protestors climbing and urinating on the National War Memorial and dancing on the Tomb of the Unknown Soldier.

Ottawa police and the FBI said they are working together investigating hate crime charges.

In recent days, officials have described the protests as an “occupation” and urged organizers to stand down.

Ontario’s Premier Doug Ford said the situation had become an “occupation”, breaking rank with most of the conservative party which has come out in support of the truckers.

“It’s not a protest anymore. It’s become an occupation. It’s time for this to come to an end,” he said.

Another conservative lawmaker described the participants as “radicals and anarchist groups, calling it “the Siege of Ottawa”.

“I spent the week undergoing the Siege of Ottawa,” Pierre Paul-Hus tweeted.

“I ask that we clear the streets and that we stop this occupation controlled by radicals and anarchist groups.”

GoFundMe took down a fundraiser for the organizers on Friday saying that evidence from law enforcement had revealed that “the previously peaceful demonstration has become an occupation”.

Around $10 million (£5.8m) in donations already made to the Freedom Convoy 2022 page will no longer be distributed to the organisers, with the funds instead being sent back to donors, the company said.

Elon Musk and Ron DeSantis slammed the company over its decision, with the Tesla boss branding them “professional thieves” while the Florida Governor threatened to investigate the platform’s “deceptive practices”.

Lester Piggott: The taciturn racing colossus with an iron will to win