The LaLula fashion store by Basauri has been forced to close after six years of activity, due to the new consumption models and the crisis derived from the coronavirus pandemic. This has been announced by means of a poster pasted on its door, which simulates an obituary and intends to denounce the various factors that have favored its closure.

To do this, a metaphor is used with the mass consumption online and the covid as the main symptoms of a disease against which the boutique “It has not been able to compete with any type of antibiotic”, inviting the reflection of everyone who passes in front of its window.

As explained Iratxe Barayazarra, owner of LaLula, in statements to eitb.eus, “times have changed, and the pandemic has also changed us.” Account that from the store they have also spent resources in creating a web page, but “there is no way” to compete against the massive purchases by Internet to big platforms.

He has denounced that “the public has gotten used to buying at balance” and has made reference to numerous days of sales such as Black Friday, Singles Day, Golden Week, Fantastic Week, “Saint I want” and “San Medalagana“, adding that “they invent any excuse” in order to invite consumption.

He emphasizes that he has never made special offers on those special days when it is increasingly common, despite the insistent questions from customers: “people feel attacked, because everyone does.” As an example of this infeasibility, he explained that, “if I am receiving collections on November 12, I cannot make you an offer on November 30”. In these cases, he usually affirms that “if they want to see me doing this, next year I will not be able to support myself.” 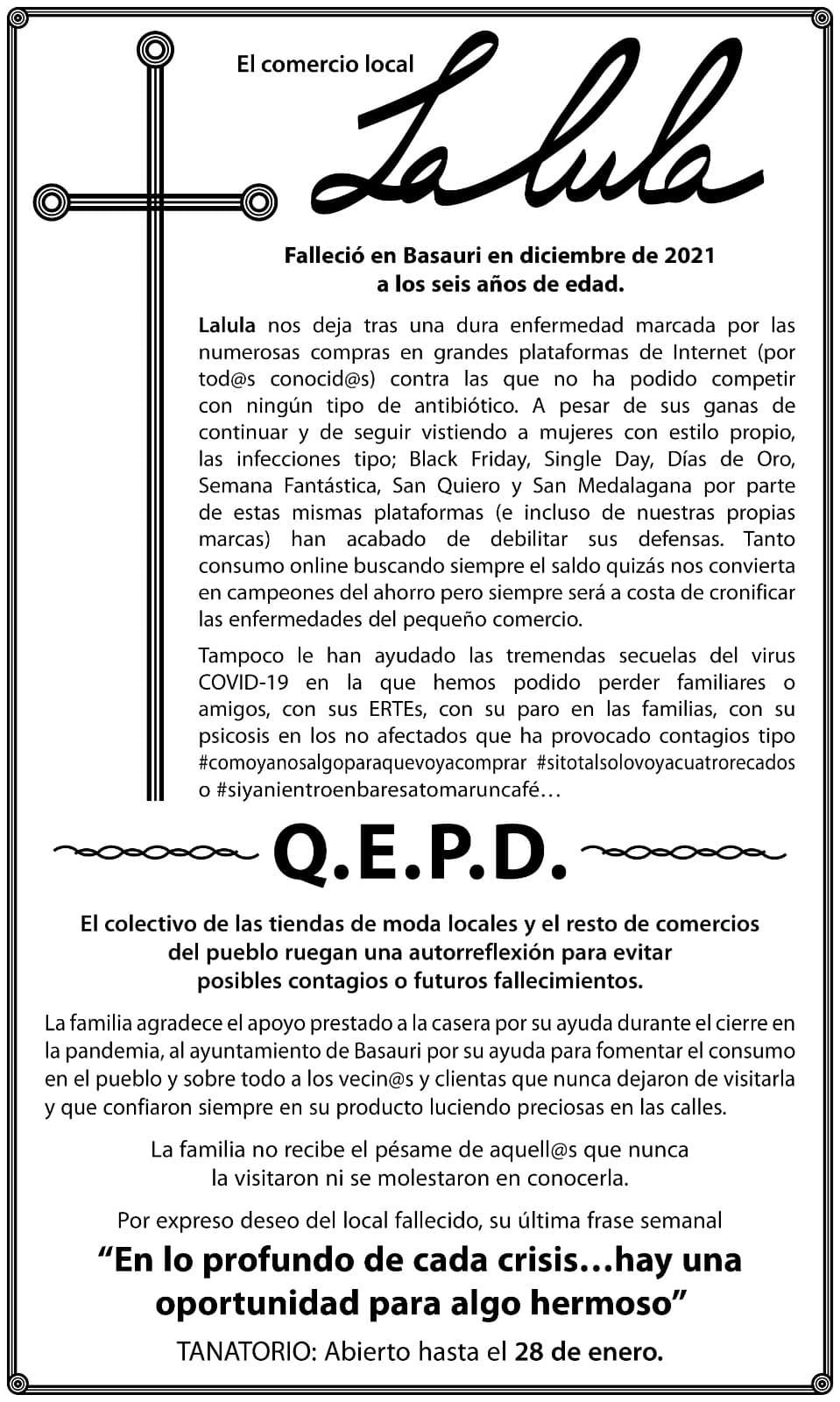 ‘Esquela’ from the LaLula boutique. Photo: Facebook profile of the establishment

“I wanted to make this reality visible, since we are at a time when everything is being made visible,” Barayazarra added. You don’t want people passing by to think only: “Look, another store is closing.” It claims, on the contrary, give visibility and raise awareness: “It is not about scolding anyone, but about stopping to read and reflect.”

After placing the poster, the owner of LaLula declares having received the attention of “younger and older” people, as well as the support of colleagues from small businesses. “I did not expect it, I was afraid that people would see it because the message is shocking,” he confesses.

The pandemic as the final punchline

In reference to the pandemic, the merchant has declared that the covid “has come to finish us all, but we were already bringing that scourge of online shopping.” It has also regretted that “He who did not know how to buy online, has learned from the pandemic”. As the main justification for consumers to avoid buying in small shops, he recalled a frequent phrase in the pandemic: “they tend to say that they are only going to go out on the street to run four errands“, with the consequent implication of not spending in local commerce beyond what is strictly necessary.

Nonetheless, LaLula, which continues in liquidation until next January 28, will be presented to the Bizkaidendak shop window contest “with this other reading, instead of the usual peace and love“, with the intention of showing another reality.

Barayazarra has recommended “that they read the obituary, which is a summary of what the little ones are experiencing in front of the big ones”, and has invited reflection adding that “in all moments of crisis something beautiful can be born”.

The trader is hopeful for what is to come and declares that “I will have had to close, but I have stayed with my principles until the end.”