Skip to content
Home News A 41,500-Year-Old Mammoth Ivory Pendant, The Oldest Evidence of a Decorated Jewel in Eurasia | Science 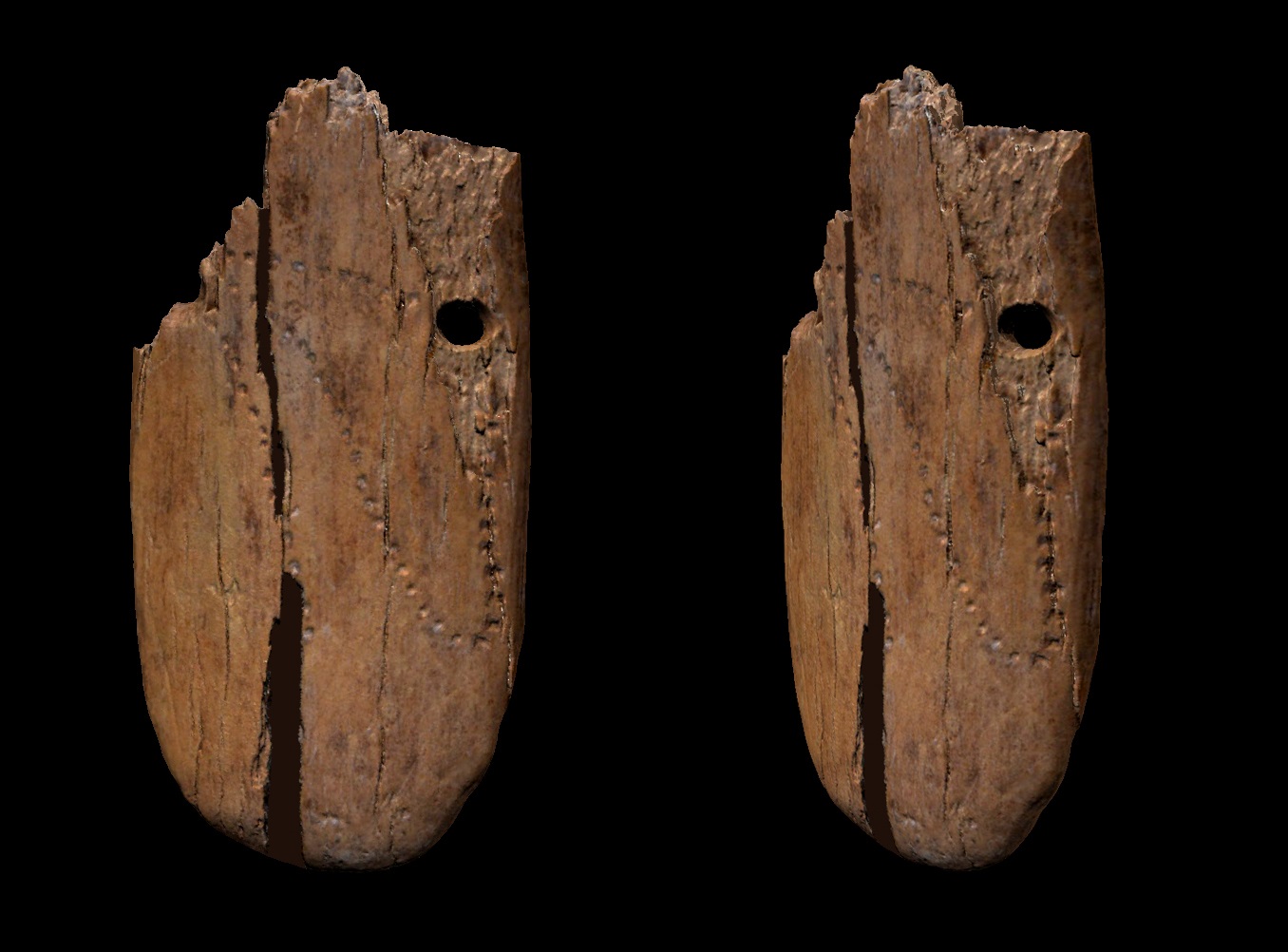 A group of archaeologists found a decorated mammoth ivory pendant in the Stajnia cave in southern Poland in 2010. Together with him, they found a horse bone awl and fragments of other animals. All this corresponds to the Upper Paleolithic, that is, between 37,000 and 42,000 years ago. To date these objects they have used the radiocarbon method, which has clarified that the accessory, which has an oval shape, is 41,500 years old, as explained in a study published this Thursday in the magazine Scientific Reports. This specimen therefore becomes the oldest jewel decorated by humans in Eurasia dated so far.

The jewel was found divided into two parts and decorated with more than 50 partial perforations and two complete holes. These drawings, the scientists point out, could represent arithmetic counting systems, symbolize the monthly cycle of the Moon or the Sun, or be purely aesthetic. This punctiform way of decorating had already been found in other Upper Palaeolithic sites, especially in France and Germany. But these discoveries are not exactly dated. These estimates that they give on these deposits are still more recent than the punch and the pendant found in Poland. Sahra Talamo, professor in the department of Chemistry at the University of Bologna (Italy) and co-lead author of the study, highlights that the point of the research is that currently “you cannot talk about personal adornments or the beginning of human behavior change if it is not based directly on the date ”.

Until a specific date was reached, the international group of researchers – including Polish archaeologists and scientists from the Max Planck Institute for Evolutionary Anthropology, among other institutions – went through different phases. In the Polish cave they found pieces that they thought corresponded to Neanderthals, but before confirming it they had to do a series of experiments. It was then that Talamo went there to date the find. The problem he found is that, for natural reasons, artifacts and archaeological remains had been moved between the archaeological layers or levels. Normally, according to Ignacio de la Torre, a scientist at the CSIC’s Institute of History, archaeological levels “correspond to specific stages of human occupation.” In this case, several occupations had been mixed in the same place. Therefore, they could not confirm with certainty that the pendant and the awl were made by Neanderthals. To solve this, they decided to first use the NIR method, which serves to verify the collagen that may be in the objects, and then make use of the radiocarbon technique. This technique consists of determining the age of an organic sample, in this case mammoth and horse bone, by measuring the amount of radioactive carbon present. The problem is that it is destructive and, therefore, they lose a minimum part of these objects. “For this reason it took several years before the study was possible. Nobody wants to destroy a piece of a Van Gogh work, you have to be careful ”, explains Talamo.

This discovery is not the oldest known jewel, but it is the first decorated in the area. In March 2015, the magazine PLoS One published an investigation that claimed that Neanderthals created jewelry 130,000 years ago. This study analyzed the talons of several different eagles found in 1900 in Krapina, a city in present-day Croatia. Some of them were cut and others showed to have been polished. Because of these characteristics of the bones, the scientists suggested that they were part of a set of jewelry and that the manipulations were the result of mounting the claws on a necklace or bracelet.

De la Torre points out that the discovery of the pendant in the Stajnia cave is a sign that there was “a certain aesthetic concern” and that it could probably “be related to identity issues”. This researcher highlights that the discovery corroborates that symbolic behavior was “inherent to the first cultures of Homo sapiens. Before the appearance of these, the symbolic elements were very scarce or practically non-existent ”.

The aptitude for symbolism, according to some biologists from the University of Bologna in a study published in 2000, is present not only in artistic representations and funeral practices, but is also exhibited through all manifestations of human activity or representations of natural phenomena. As they explain, several types of symbolism can be observed: the functional, based on the manufacture of tools, habitable or food technology; the social, referring to language and communication; and the spiritual, related to funeral practices and artistic expressions of all kinds. From these terms it allows scientists to recognize forms of symbolism from the oldest humans.