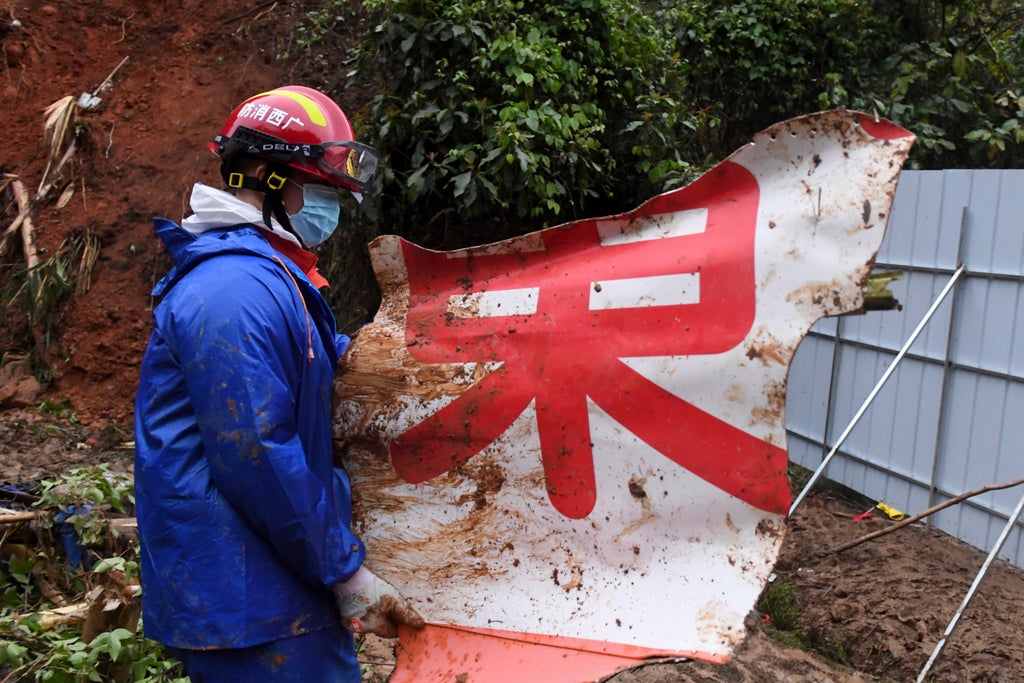 Five days after the crash of a passenger jet in mountainous southern China, the disaster’s cause remains a mystery while the search for the plane’s second “black box” continued Friday.

Hundreds of people, many in white hazmat suits, combed the impact zone and a much larger debris field along steep slopes. They were searching for a box containing the flight data recorder, along with bits of the wreckage and the belongings and body parts of the 132 on board who perished in the crash.

Persistent rain has frustrated the task and the remote location has required the use of dogs and hand tools, including metal detectors more often seen at airports.

Wallets, identity and bank cards and human remains have been found, along with several large pieces of the wings and fuselage.

The China Eastern Boeing 737-800 left a 20-meter-deep (65-foot) hole when it fell from the sky Monday and workers have been pumping out rainwater to facilitate the search.

The US National Transportation Safety Board said talks were ongoing with China over dispatching an expert to participate in the investigation, as is standard when the plans involved are from American manufacturers.

“Travel to China is currently limited by visa and COVID quarantine requirements. We are working with the Department of State to address those issues with the Chinese government before any travel will be determined,” NTSB spokesperson Peter Knudson said in a statement.

China Eastern, one of China’s four major airlines, said Thursday the Shanghai-based carrier and its subsidiaries have grounded a total of 223 Boeing 737-800 aircraft while they investigate possible safety hazards.

China Eastern earlier said the grounding of plans was a precaution, not a sign there was anything wrong. The airline has said the plane that crashed was in good condition and its flight crew was experienced and in good health.

The plane that crashed was flying from Kunming, the capital of Yunnan province in China’s mountainous southwest, to Guangzhou, a major city and export manufacturing hub in the southeast. Authorities say there were no foreign passengers on board.

Investigators have said it is too early to discuss possible causes. An air traffic controller tried to contact the pilots several times after seeing the plane’s altitude drop sharply but got no reply, officials have said.

The “black boxes,” usually painted orange so they can be easily found, are considered key to figuring out what caused the crash. They are usually stored in the tail section of the plane where they are most likely to survive a crash.

The first flight recorder was found relatively close to the impact zone, its outer casing heavily damaged but the internal unit mainly intact, according to investigators.

Cockpit voice recorders can capture voices, audio alerts and background sounds from the engine or switches being moved. The flight data recorder stores information about speed, altitude and direction, as well as pilot actions and performance of important systems.